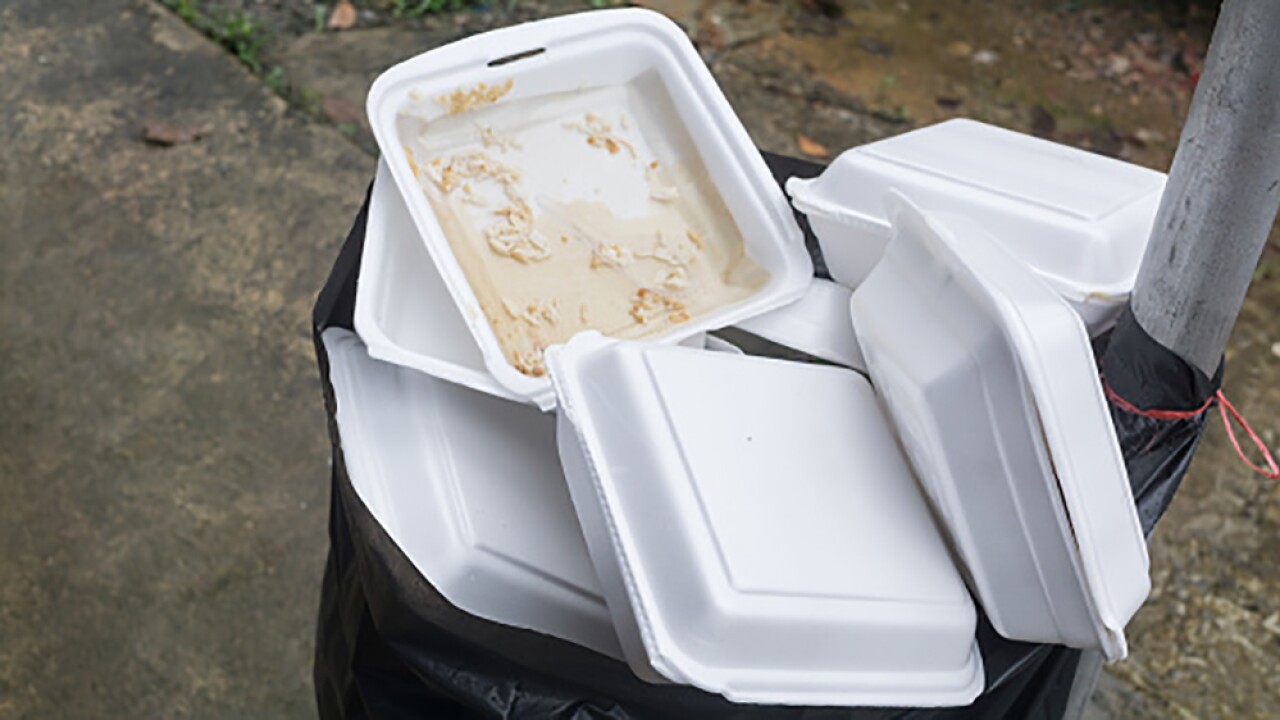 uncle_daeng/Getty Images/iStockphoto
Foam food containers are hazardous to health and the environment.

BALTIMORE — Councilman Bill Henry’s introduction of legislation to the Baltimore City Council that would ban the distribution of plastic bags, instead encouraging consumers to bring their own reusable bags or requiring businesses to use biodegradable bags or other similar options, adds to a steady growth of environmentally progressive laws being enacted in the state.

Starting at the local levels, such legislation has now caught on at the state level, with a recent ban on certain types of food packaging being passed during the 2019 General Assembly session. A ban on such packaging already existed in Anne Arundel County and Baltimore City after their respective legislatures passed such laws prior to the state-level ruling.

Baltimore City started the trend in Maryland with the passage of a ordinance banning “expanded polystyrene food foam containers” in the city in April 2019, according to the city’s Office of Sustainability. The ban goes into effect Oct. 19, 2019.

The law prohibits the use of polystyrene, more commonly known as Styrofoam, as disposable food ware or packaging. Familiar items like foam cups, clamshell food containers, bowls and plates will no longer be allowed in the city. Paper, plastic, aluminum, and compostable containers will still be allowed, the Office of Sustainability said.

Beginning Oct. 19, representatives from the Health Department will check if businesses are in compliance. Those that are not could face a $1,000 fine for the first day they are found to not be in compliance, followed by a $500 per day fine for each subsequent day in violation following the initial citation. The bill largely targets food sellers as the materials banned are predominantly used in food packaging. Polystyrene materials that package food coming from outside the city, like the foam trays raw meat is sold on at grocery stores, is exempt from the ban.

Anne Arundel County followed the trend in February of 2019, when the County Council passed a similar law on a 4-3 vote, targeting similar foam products and food purveyors who utilize them.

The anit-Styrofoam ban grew statewide after a bill championed by District 46 Delegate Brooke Lierman successfully passed in its second year of floor debate. On May 25, a MD HB109 was passed through both chambers of the Maryland General Assembly, becoming state law. With its passage, Maryland became the first state in the county to pass a law banning such materials.

The new legislation applies to all “expanded polystyrene food service product,” according to the language of the bill. These include food containers, plates, hot and cold beverage cups, meat and vegetable trays, and egg cartons, but does not include soup containers or other packaging where food was sealed and then given to a seller, or materials used to package raw meat.

The statewide law affects food purveyors, as well as schools. The ban goes into affect on Jan. 1, 2020. Prior to enforcement, the state will participate in an educational campaign to make the public and businesses aware of the law, as well as an outreach effort to food businesses, health departments, trade organizations, and schools. According to a financial analysis of the bill, roughly 15,466 small businesses in the state may be subject to the near rule.

"Overall the bill's impact on small food service businesses is likely minimal, since the additional cost for alternative products is minimal, and the bill provides time to use existing inventory and identify and purchase alternatives," the Department of Legislative Services Fiscal Policy Note analysis said. The report assumes the same minimal cost implications for schools. Specifically, the analysis says going from foam trays to biodegradable trays may cost Anne Arundel County Schools $390,000 more annually, a cost considered nominal in a food services budget of about $36 million for the district.

County health departments will be relied on to enforce the new rules, checking for banned materials during the course of normal food satefy inspections. Violators, either businesses, schools or individuals, face a fine not to exceed $250 for each infraction. Those who run afoul of the ban will have three months to correct the issue after receiving written notice.

MD HB 109 goes into effect July 1, but businesses will not be subject to fines or violations until the beginning of the coming calendar year.