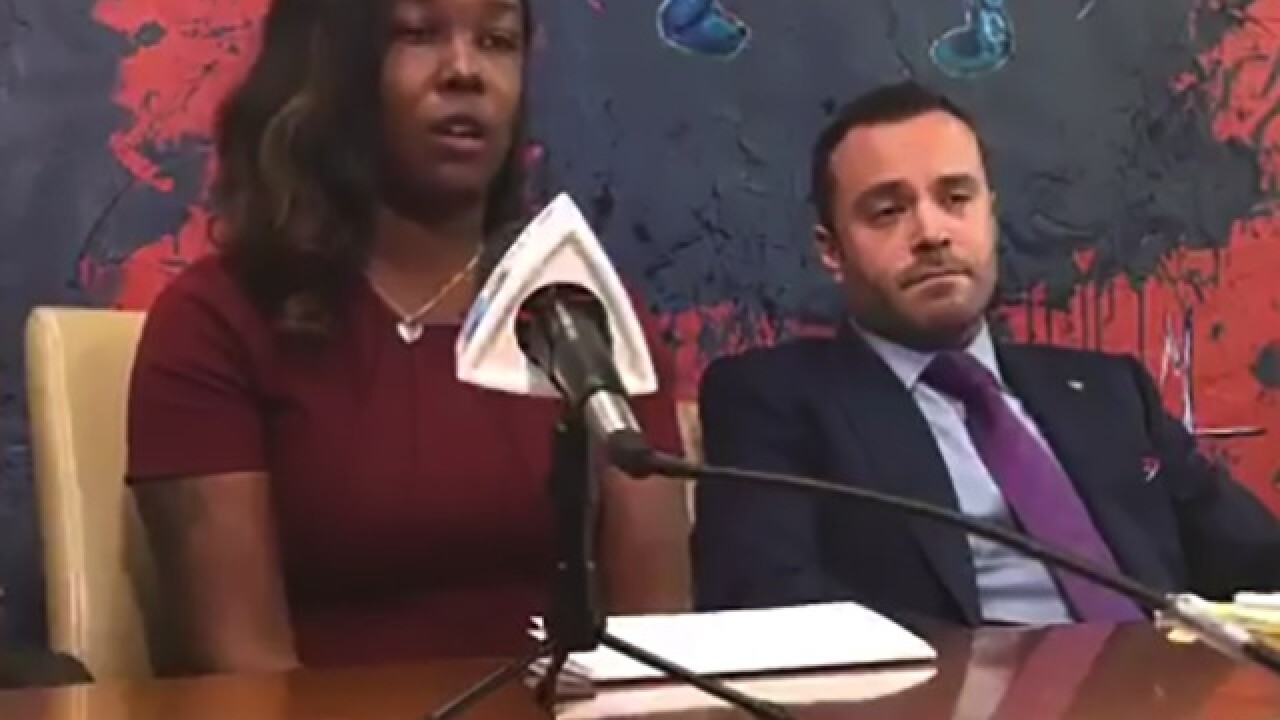 Copyright 2018 Scripps Media, Inc. All rights reserved. This material may not be published, broadcast, rewritten, or redistributed.
<p>Detective Sean Suiter's wife, Nicole, does not believe the IRB's conclusion that her husband killed himself in November of 2017. She thinks his killer remains at large. <em>(Photo screenshot of WMAR Interview)</em></p> 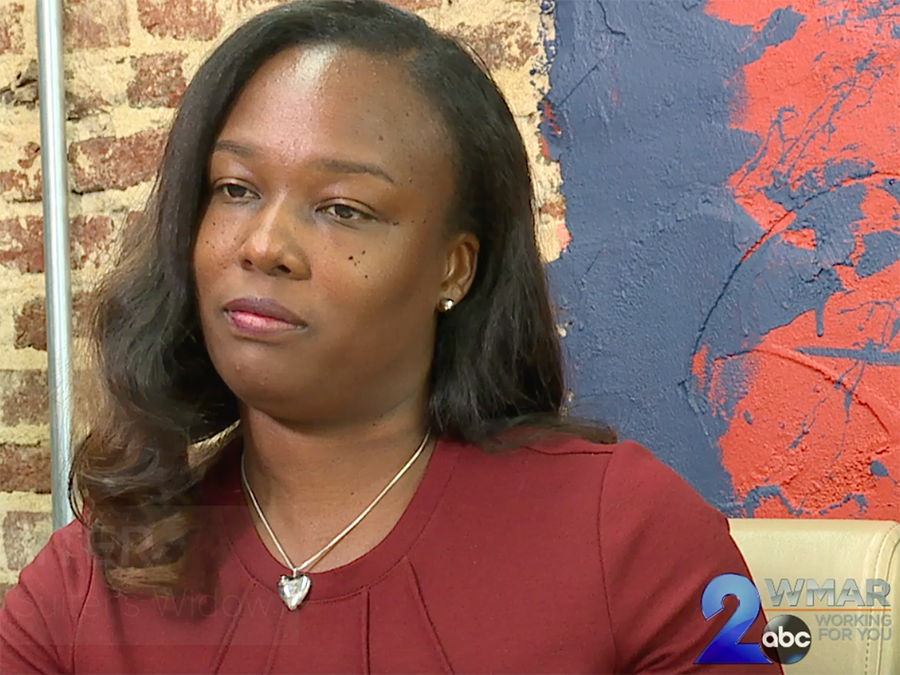 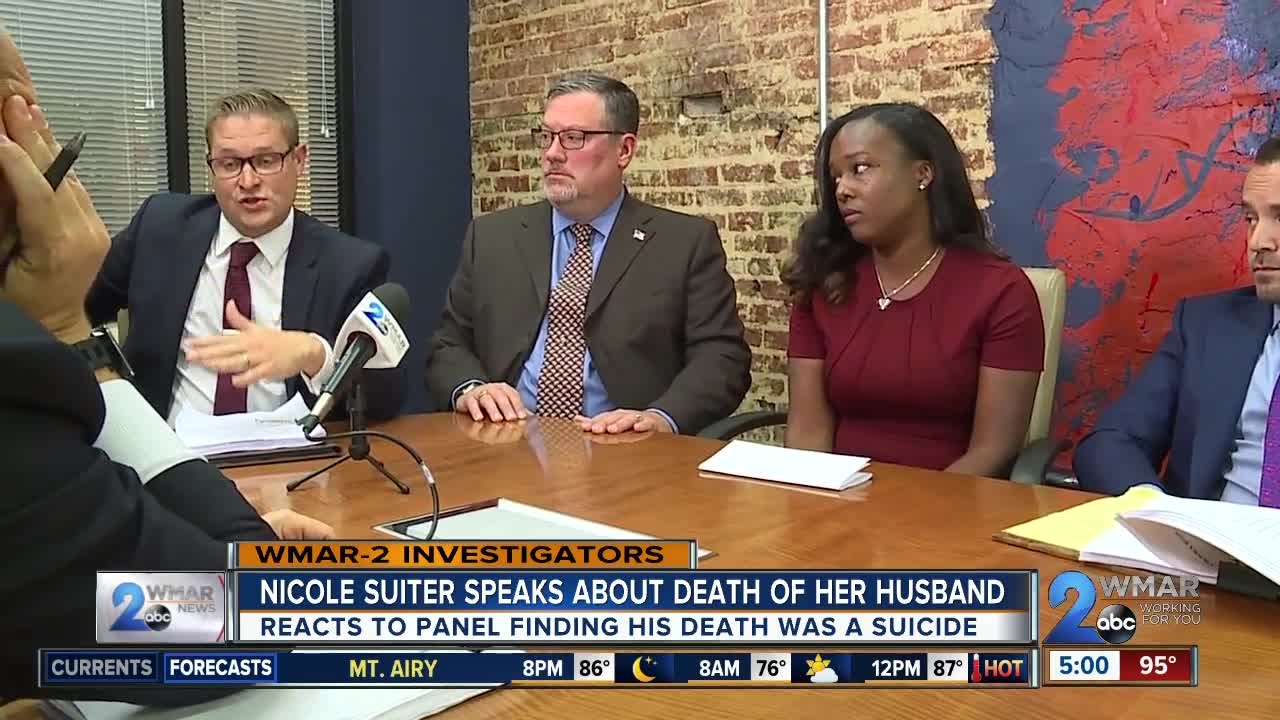 When asked what the past few months since the death of her husband, Detective Sean Suiter, have been like, Nicole Suiter was succinct.

WATCH: @BaltimorePolice Det #SeanSuiter’s widow Nicole speaks out. In her very first interview since her husband’s death, she reacts to the independent review board’s findings of suicide. More soon on @WMAR2News pic.twitter.com/xgMrQ53Qwk

Nicole does not believe her husband took his own life, an action that would have abandoned her and their five children.

“I knew my husband very well. He wasn’t a coward. He wouldn’t have went out like that." Nicole Suiter said when speaking with WMAR 2 News' Brian Keubler. "He wouldn't leave his family like this. He had no reason to."

Sean was given a hero's ceremony at his funeral after being killed in November of 2017 in what, at the time, was believed to have been a shooting in the line of duty.

The medical examiner ruled her husband's death a homicide, but the Independent Review Board tasked with looking into his death came to a different conclusion, believing Detective Suiter died of a self-inflicted gunshot wound.

"What bothers me about this entire report is that they’re attacking a man who served our country in Iraq, fought a war for us, and then came home and became a police officer after he served," said one of Nicole Suiter's attorney's Duane Stone. "This is a man of service. This is a man of honor. This isn’t a man that gives up their life easily for a ludicrous reason based on this report."

The chairs of the IRB stood behind that conclusion at a press conference Wednesday. Baltimore Police Interim Commissioner Gary Tuggle said investigators will review the IRB's findings, but the case remains open and any change in cause of death would need to be determined by the medical examiner.

“I’m just shocked at what is contained in this report, "said Paul Siegrist, another of Nicole Suiter's attorneys. "Multiple facts are left out of this report. They give undue weight to certain facts and totally ignore everything else. They don’t interview witnesses. They somehow arrive to Sean’s state of mind without speaking to his wife. This is garbage."

"What the community does not know is I had spoken with my husband less than an hour prior to his murder," Nicole read in a statement. "Sean was in a great mood and happy spirit. We briefly joked about a video of him dancing that I."

“Not only did the Federal Bureau of Investigation and the U.S. Attorney’s Office say that Sean was never a suspect but was only a witness, but the second round of indictments that came out involving Wayne Jenkins and several other officers, showed that Sean was an unwitting part of their larger drug conspiracy and their planting of drugs," said Jeremy Eldridge, Sean Suiter's attorney.

Both he and Nicole say they have documentation in the form of letters from the U.S Attorney that clear Sean's name, as well as numerous public statements made by investigators and prosecutors. Besides potentially smearing his reputation, if the medical examiner were to change the cause of death in Suiter's case, the family may lose access to benefits. The family currently receives Sean's pension and would be inline for additional funds from the police department and the Department of Justice if his death remains a line of duty killing.

"There’s nothing new that’s come to light to substantiate these false claims of misconduct by Sean," Eldridge said. "All this is is a continued self-serving statement to remove Sean’s daily from having these benefits from having their closure in this manner.”

Nicole said the IRB's determinations have inflicted even more pain. She said she will fight any attempt to change the ruling of her husband's death from a homicide to a suicide. She said her family feels cheated by the review board.

She believes her husband's killer is still out there.

“I can’t heal until I get the truth," she said.

Nicole Suiter's full statement can be read below:

“I understand that the public has been patiently waiting for Detective Sean Suiter’s wife to speak out and before now, I did not have the strength in me to do so. However, with this outlandish presumption in hand I will not go on allowing anyone to shame my husband’s name and ruin his legacy with these false allegations of suicide. There is no one alive who can convince me that the theory that this panel has formulated is the correct answer. Honestly I have the same views and thoughts as the majority of the community, and that is, my husband did not commit suicide. I don’t make this statement as a heartbroken widow. I make this statement as an aware individual who evaluated every piece of evidence that has been shown to me, and with the knowledge that much evidence has not been presented as well as inconsistencies I have been told. Based on the fact that no one knew my husband better than I, I will not accept the untimely death of Sean as nothing other than a murder that is being covered up for reasons unknown to me or my family. I have done the same research and investigation as many others, and although I have not publicly spoken thus far, please do not believe I was blinded by the lies or misleading information. Numerous recounts of what may have happened have been speculated. What the community does not know is I had spoken with my husband less than an hour prior to his murder. Sean was in a great mood and happy spirit. We briefly joked about a video of him dancing that I captured. Who knew that would have been the last time I had spoke with my husband, certainly not I. I will not sit here and say I’m an overly religious woman, but I am a Christian and I do believe in the power of prayer. And that is what has delivered me me through this toughest time of my life. Losing my spouse and remaining strong for my children, I do not condone violence or war, but I will openly stand with protestors from Baltimore City and around the world to fight for justice. Sean did not deserve to die in this manner, and no one deserves to get away with this. Please continue to pray for my family, uplift us with prayer, for strength and sanity as we seek justice for Sean. Thank you all for the outpour of love and concern.”