The Baltimore Police Department has just released the final report from an Independent Review Board tasked with investigating the death of Homicide Detective Sean Suiter, in which the board determines the detective's death was most likely a suicide.

The Board concludes that, based upon the totality of the evidence, Detective Suiter intentionally took his own life with his service weapon. The most pertinent evidence leading to this conclusion includes:

• A portion of the gun barrel was in contact with Suiter’s head at the time the fatal shot was fired;
• Suiter is right-handed, and the bullet entered the right side of Suiter’s head;
• The gun that killed Suiter had polygonal rifling, consistent with a Glock, which was Suiter’s service weapon;
• Suiter’s DNA was found inside the barrel of Suiter’s Glock and on its surface, meaning that Suiter’s weapon fired the fatal bullet. No other DNA was present;
• The remains of the fatal bullet are consistent with department-issued ammunition and the firearm issued to Detective Suiter (but could not be confirmed as Suiter’s Glock due to deformation of the projectile);
• All three spent shell casings found at the scene came from Suiter’s weapon;
• Blood spatter was found on the inside of Suiter’s right dress shirt cuff, indicating that Suiter’s hand and arm were in as high a position as was the entrance wound at the time the fatal shot was fired, with blood being expelled into Suiter’s sleeve;
• Suiter was trained in self-defense in both the military and the police, and specifically was trained to use the gun slide to disable the weapon if attacked;
• Trace amounts of DNA, which may be attributed to two officers who carried Suiter from the lot for hospital transport, were found on his person. Apart from that, no DNA other than Suiter’s was located on his person;
• The autopsy revealed no defensive wounds, such as abrasions on the knuckles, hands or arms, and Suiter was found with his police radio still in his left hand, which is inconsistent with a struggle;
• Video from a neighbor’s video camera and testimony of two witnesses establish that a suspect would have had a couple of seconds at most to disarm Suiter, shoot him with his own weapon, erase any trace of his presence, and exit the vacant lot without being seen or heard;
• Suiter was scheduled to testify before a federal grand jury the following day in connection with the BPD Gun Trace Task Force (“GTTF”) corruption investigation;
• Suiter was considered a “subject” of that investigation, and another GTTF member had implicated Suiter in criminal wrongdoing; and
• Suiter’s attorney repeatedly attempted to contact Suiter the afternoon of November 15 to confirm a meeting that evening at 5 p.m., but Suiter ignored the calls and texts.

The release Tuesday included a 207-page report detailing the boards investigation and findings, as well as video from nearby surveillance cameras, and an audio clip of Suiter's final radio transmission.

The seven-member panel reviewed thousands of pages of documents and photographs, watched videos of witness interviews and footage from body-worn cameras and neighborhood surveillance, and listened to radio and 911 transmissions. The panel interviewed more than 30 additional people, some multiple times. They drafted their conclusions after three face-to-face meetings, three trips to the scene of the shooting, and several phone conferences.

“The Board is comfortable that it was given access to all records, information and persons it needed to perform a thorough review.” the report says. “BPD was allowed no editorial rights regarding our report.“

The report made recommendations as well, saying the department should deploy an “Incident Command System strategy for any police effort expected to exceed 10 hours,” arguing “it is disturbing that BPD has been so resistant to this well recognized policing practice.”

The board recognized the emotional toll the killing put on the homicide unit, which had never previously lost a detective to a perceived murder. Those same detectives were then tasked with searching for his killer. It said if such a case arises again it should be investigated by an outside agency.

What became a point of contention following the killing was determining what information was fact and what was hearsay.

“The leadership of BPD must firmly commit to a policy and practice of being honest with the public,” the report reads, saying “in the early stages of the investigation, the truth may be murky.” The Commissioner, who was Kevin Davis at the time of Suiter’s death, at times shared with the public information that was unverified and proven to be inaccurate. This misinformation helped fuel rumors and speculation about the death.

The most important lesson, though, the board said, was that the police department had not learned from prior events. “Commanders and Supervisors have consistently failed to implement ICS and professional best practices despite serious professional criticism,” the report says. “No organization can be said to be committed to change if it is not committed to learning from its mistakes.”

Speculation about Suiter's death grew when his name became tied to the Gun Trace Task Force investigation and eventual prosecutions of the past two years.

Suiter's was scheduled to testify the day after he was shot. The detective was involved in an incident in 2010, in which he and two detectives from the now disgraced unit attempted were involved in a chase that killed an 86-year-old man.

BACKGROUND ON THE IRB

In the first meeting of the Panel, Stewart explained the purpose and task of the panel, “We are not going to re-investigate the homicide but what we are going do is to do an assessment of the work that has been done and we are going to carefully make recommendations of best practice in ways of what worked well and what needs improvement.”

Back in April, Stewart promised a “comprehensive report, and assessment of the facts, the circumstances, the response, the investigation and the conclusion and findings of this tragic act.”

The panel went on to meet nine times from April through August and just today produced that final document on the death of Sean Suiter. 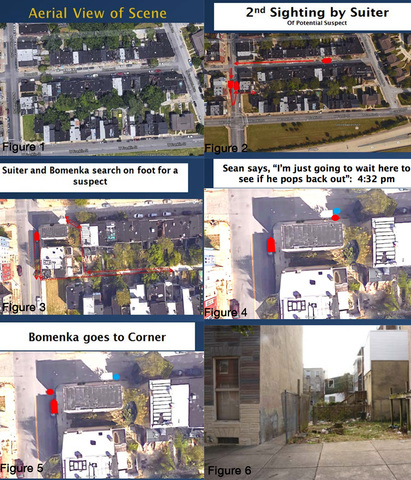 Suiter was shot to death in the 900 block of Bennett Place on November 15, 2017. The original ruling of his death, and the ruling that still stands today by the Office of the Chief Medical Examiner is that Sean Suiter was murdered.

Suiter was shot by his own service weapon. Baltimore Police sources close to the investigation confirm that the final and fatal shot was to the back of his head near his right ear and exited through his left forehead. That slug was recovered by police, buried in the dirt which led detectives originally to conclude Suiter was in a struggle and forced to the ground.

Sources also point to other forensic evidence of dirt marks on Suiter’s pants and an unintelligible radio transmission as other signs of struggle with a suspect that eventually overpowered him.

The medical examiner ruled Suiter’s death a homicide as police continued to lock down the Harlem Park neighborhood looking for leads. Baltimore Police say they were originally looking for a suspect described as a black man in black jacked with a white stripe.

As the case continued to linger with few developments, former Baltimore Police Commissioner Kevin Davis requested the FBI take over the investigation, but the agency declined.

There is still a $215,000 reward for any tips leading to the arrest of a suspect.