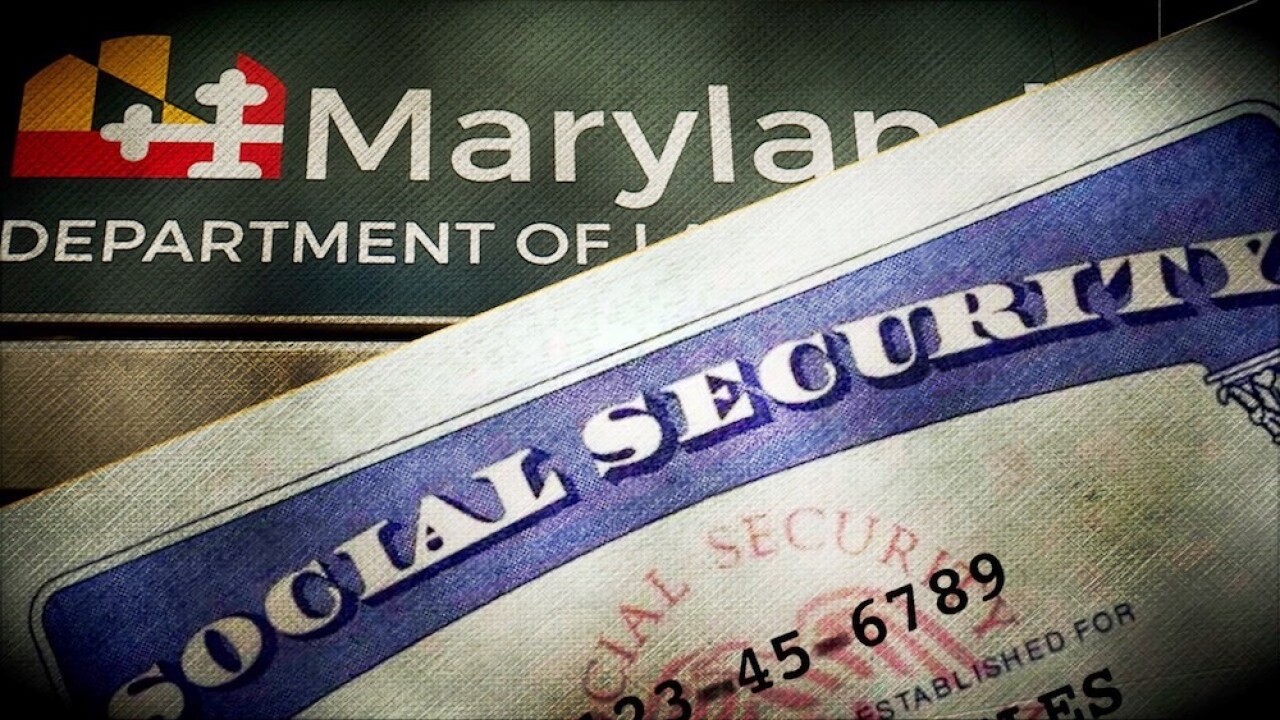 She didn't think she would have an issue. In April, Miles received a letter from the Maryland Department of Labor letting her know she's eligible for $179 per week, plus $600 through the CARES Act, but she never received payment and struggled to get through to the claims center.

"Mind you, the whole three months, I have been trying to get somebody on the phone, and I can’t get anybody on the phone. Literally, blocking out two to three hours of my day each day to call," Miles said.

Finally, in June, she received a notification asking her to reapply under the Pandemic Unemployment Assistance (PUA) program, which she did. She then received another letter flagging her Social Security number because it didn't match the one in the state's system.

Miles called the number listed and learned her Social Security number was backwards. And she knows she didn’t put it in that way.

"It’d take more energy to actually try and put it in backwards then just to type it in correctly, you know?," Miles said.

Scott Kulick had the same issue.

He's been out of work since March 27, but wasn't able to apply for unemployment insurance until the state started accepting PUA applications. Since April 29, he's waited for his benefits. For weeks, he tried calling and was finally told his claim hadn't been processed because his Social Security number had been reversed.

"After a tedious amount of (literally tens of thousands) phone calls, a supervisor from the Department of Labor called me to tell me they were looking into the issue I was having with my SSN being backwards in their BEACON system. She said they were working to correct the claim and that she couldn't give me an exact timeline but that rest assured it will be corrected.," Kulick wrote in an email to WMAR-2 News Mallory Sofastaii.

A week later, Kulick is still waiting to hear when he'll receive his benefits.

Others have reported similar issues in unemployment support groups on Facebook.

"The system somehow has a big flaw in it that somebody needs to know about," said Miles.

Miles and Kulick suspect the issue may be related to the state's transition to the new BEACON One-Stop system on April 24.

In a letter sent from the Department of Labor to Miles in early April, the last four digits of her Social Security number are in the right order, but a few months later, it somehow flipped.

"It’s just gotten to the point where physically, I’m becoming depressed, my nerves are off, I don’t know what I’m going to do. I don’t want to cry, but it’s hard," said Miles.

In an email, a spokeswoman with the Department of Labor wrote:

We have a member of our unemployment insurance team looking into Kimberly Miles' claim and will contact her directly. While claims may be pending in adjudication due to various issues with SSNs, Kimberly's SSN seems to have been mistakenly inverted when her claim was moved from regular UI to PUA in the BEACON system to expedite the processing of her benefits. We are not aware of this inversion happening to many other claimants.

The Department of Labor has said if there are issues with your Social Security number, you need to submit proof, they’ll review the claim, make any changes, then approve. Until this is done, the claim doesn’t move forward.

Miles submitted a copy of her Social Security card on June 21, but hasn’t received notification that the issue's been fixed or when she’ll see her benefits.

Last Thursday, the Department of Labor said 99 percent of claims from March and April had been processed and the remaining claims require manual processing due to potential fraud, Social Security number verification, or claimants receiving pensions or severance pay.

WMAR-2 News Mallory Sofastaii also reached out to Sagitec Solutions for comment. This story will be updated with their response.