Students, parents calling on the governor to intervene in college housing dispute

Students still stuck in leases despite switch to virtual learning

BALTIMORE — College students across the state are fighting to get out of their housing leases as campuses transition to online learning.

TU President Kim Schatzel said “refunds will be promptly issued to residential students who have already paid for housing.” However, that doesn’t apply to Brian Payne’s son, a freshman living in the Paca House.

Even though the building is on university property, along with Tubman House and Millenium Hall, the buildings and housing contracts are owned by the Maryland Economic Development Corporation (MEDCO), a state entity.

MEDCO has said they can’t release students from their leases due to its obligations to bond holders, vendors, and other entities.

“The buildings are right next to each other, so I don’t even see how it’s even conceivable that the president of Towson can say the campus isn’t safe for students, faculty, and students have to be out of here by September 4th, but they’re only really talking about a portion of them,” said Payne.

The other portion, who live at MEDCO properties, are financially obligated to continue paying thousands of dollars in rent.

“I think Towson University needs to speak in one voice to all parents, all students involved and it’s a universal decision and everybody should be treated the same,” Payne said.

The university is encouraging MEDCO to follow TU’s lead by issuing refunds. On Wednesday, a spokesperson for the university wrote:

“The ground lease with MEDCO does not provide means whereby the university can compel MEDCO to align with TU’s efforts to de-densify the residence halls by releasing students — with full refunds — from their housing contracts. We are in discussions with MEDCO and strongly advocating they do the right thing by our students.”

MEDCO’s policy is also impacting families with students at six other schools within the University System of Maryland where MEDCO’s properties make-up roughly 6,700 beds. 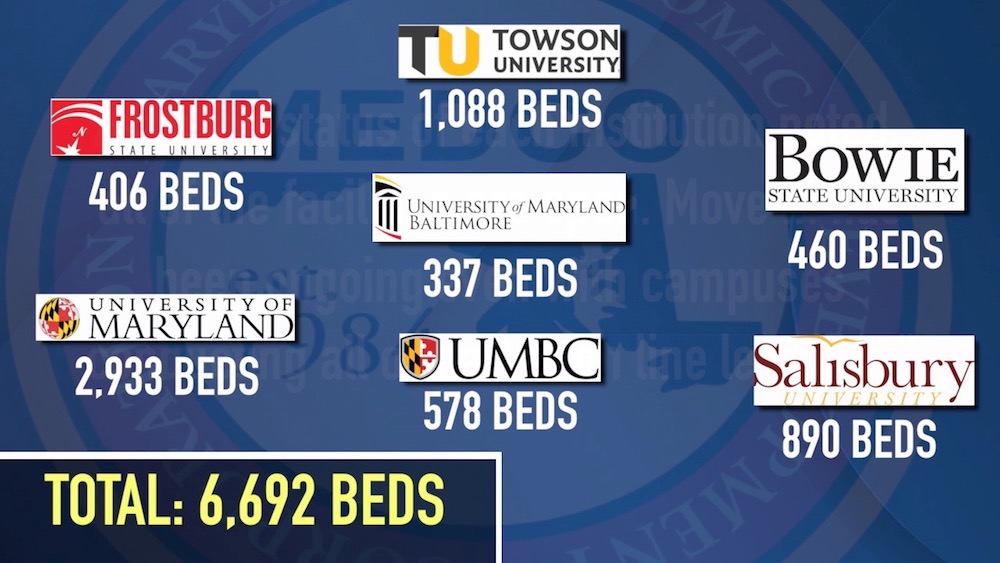 “All of the facilities are open. Move in has been ongoing even with campuses conducting all or partial on line learning,” wrote MEDCO executive director Bob Brennan in an email to WMAR-2 News Mallory Sofastaii.

Senator Rosapepe became aware of the situation after hearing from constituents stuck in leases at the University of Maryland College Park.

“There’s no answer that keeps everybody whole. Either the students and the parents lose, or the university loses, or the lenders to MEDCO could lose. Given the state of the economy, a lot of people are suffering, and it probably isn’t fair to put all of the burden on one of the players,” Rosapepe said.

He’s urging everyone to compromise, and has called on the governor to intervene.

“He does appoint the members of the MEDCO Board, he does appoint the regents of the university system, and he does control the budget right now because the legislature isn’t in session, so he’s the major player in terms of the government,” said Rosapepe.

Mike Ricci, communications director for Governor Hogan, said: "The governor has repeatedly urged both the university and MEDCO to reach a workable solution to help these students."

"I think we’re waiting on MEDCO, and I think in my opinion, MEDCO is waiting on Governor Hogan to step in and make this right somehow," said Payne.

On September 16, there will be a joint hearing on how Maryland colleges and universities are handling the fall semester. Senator Rosapepe said this issue will be brought up for discussion.

In the meantime, many of the students and parents have mobilized and are considering taking legal action. Nearly 250 people have joined a Facebook group advocating for MEDCO to release Towson students from their leases, and a petition pushing for the same thing for UMD students has collected 2,300 signatures.