Candidate strategies ahead of the GOP debate 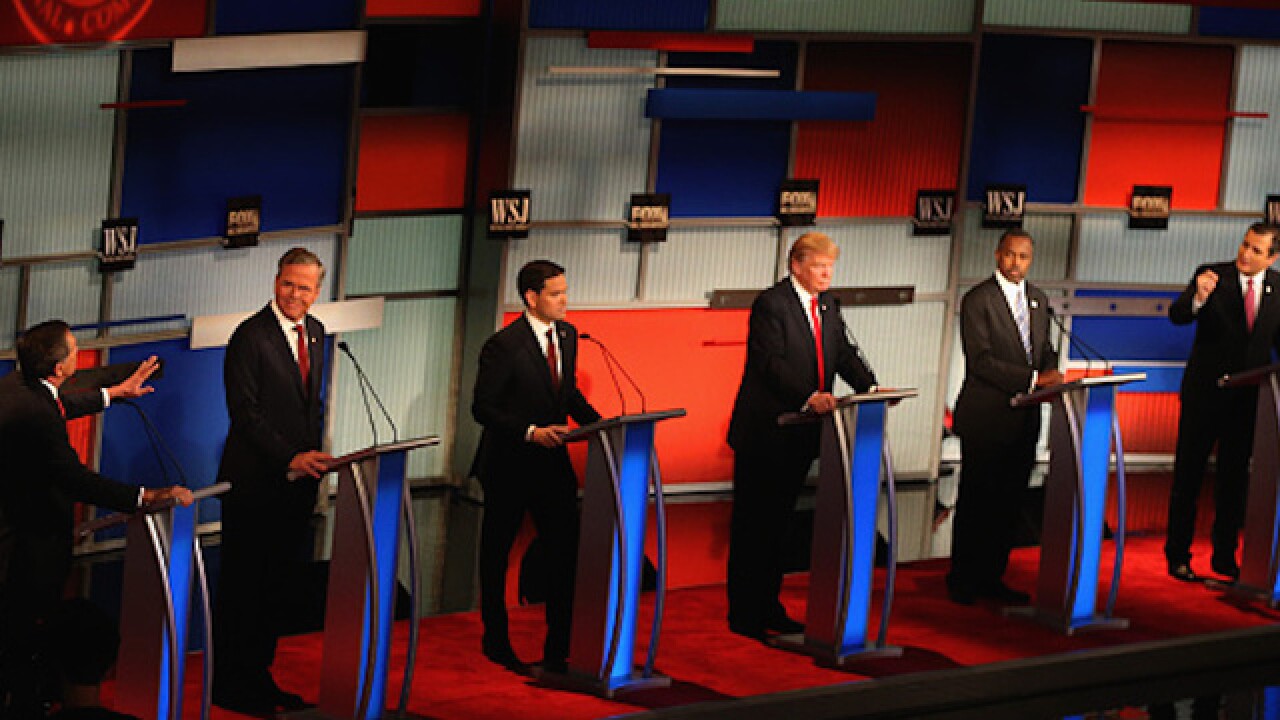 Nine Republicans hopefuls meet Tuesday in the next prime-time presidential debate, with a familiar slate of candidates looking to wrangle over what to do about the threat of terrorism and who has the right temperament and judgment to lead the nation.

At center stage will be front-runner Donald Trump, fending off a challenge from Ted Cruz. The Texas senator has surged ahead in Iowa seven weeks before the state's 2016 caucuses. New Jersey Gov. Chris Christie returns to the main stage after a downgrade to the undercard event in November. And Kentucky Sen. Rand Paul, who debate host CNN said was "on the bubble" of qualifying just days ago, gets to stay in prime time. Also appearing in the main debate will be Florida Sen. Marco Rubio, former Florida Gov. Jeb Bush, Hewlett Packard CEO Carly Fiorina, former neurosurgeon Ben Carson and Ohio Gov. John Kasich.

Here's a look at how some of the top candidates are previewing their approaches to key issues ahead of the debates.

The billionaire real estate developer spent the weekend defending his proposed ban on Muslims entering the U.S., a plan that's drawn nearly universal condemnation from government leaders around the world. In interviews with CNN and Fox that aired Sunday, Trump emphasized that the ban would be temporary and not "total and complete," as he had said initially. "You're going to have exceptions," Trump said on CNN's "State of the Union. Trump didn't name any, and he didn't back off the basic idea of a ban. He dismissed questions about the idea's constitutionality and suggested the proposal is not as bad as the potential attacks by extremists.

TRUMP ON OFFENSE vs. CRUZ

The rare detente between two GOP presidential candidates competing for conservative voters appears to be strained, if not over. Cruz was reported by the New York Times this week to have questioned at a closed-door fundraiser Trump's judgment, a departure from his public refusal to attack Trump.

Since Friday, Trump has taken aim at Cruz for opposing ethanol subsidies and alienating his colleagues in the Senate. On Fox News Sunday, Trump said Cruz has conducted himself "like a bit of a maniac."

"You can't walk into the Senate and scream and call people liars and not be able to cajole and get along with people," Trump said, referring to Cruz's accusation that Senate Majority Leader Mitch McConnell had not been truthful in negotiations. McConnell denied that. Trump suggested that Cruz's approach would impair his effectiveness. "He'll never get anything done. And that's the problem with Ted."

TRUMP ON OFFENSE vs CLINTON

Trump on Sunday bristled at Hillary Clinton's suggestion that his proposed policies are dangerous.

Clinton, he said, is "one of the worst secretaries of state in the history of the country. She talks about me being dangerous. She's killed hundreds of thousands of people with her stupidity," Trump said on Fox. Asked to elaborate, he replied that her work as President Barack Obama's secretary of state resulted in many deaths in Iraq and Libya.

Rubio on Sunday said he continues to believe that Trump is not qualified to be president because of his level of "understanding on some of these critical issues before our country," including foreign policy and national security. And he panned Obama's response to recent attacks in Paris, Mali and San Bernadino, California.

Casting himself as the most knowledgeable candidate on policy issues, Rubio said that he would have acknowledged the fear people are feeling, pointed out that potential attackers are a real threat and the Islamic State group is "not the JV team," as Obama had earlier suggested.

Rubio then said he would have finished by saying the U.S. can defeat IS with a combination of more air strikes, a force on the ground that includes special operations forces from the U.S. and elsewhere and more aggressive communications to counter the militant group's propaganda.

The retired neurosurgeon suggested Sunday on ABC's "This Week" that knowing all the issues is not what matters most in a presidential candidate.

"There is no way that I, or anybody else who is running, is an expert in every area," he said, and pointed to the way chief executives run their companies. "Do you know how to use the people around you? Do you have wisdom and judgment? And that is demonstrated by the life that you've led."

Kasich said he does not hear people in early voting states talking about whether to keep Muslims out of the U.S.

In an interview late last week with The Associated Press, Christie suggested two of his chief Republican rivals don't have the right experience or priorities to keep the country safe.

"You can't, in these dangerous times, take tools away from the government, and he's made the country weaker," Christie said of Cruz.

Christie is battling Marco Rubio for second place in New Hampshire and says the Florida senator simply doesn't have the necessary experience.

"He's not ready to be president, he's a first-term U.S. senator, we just went through that," Christie said. "You can't do on-the-job training with the presidency."