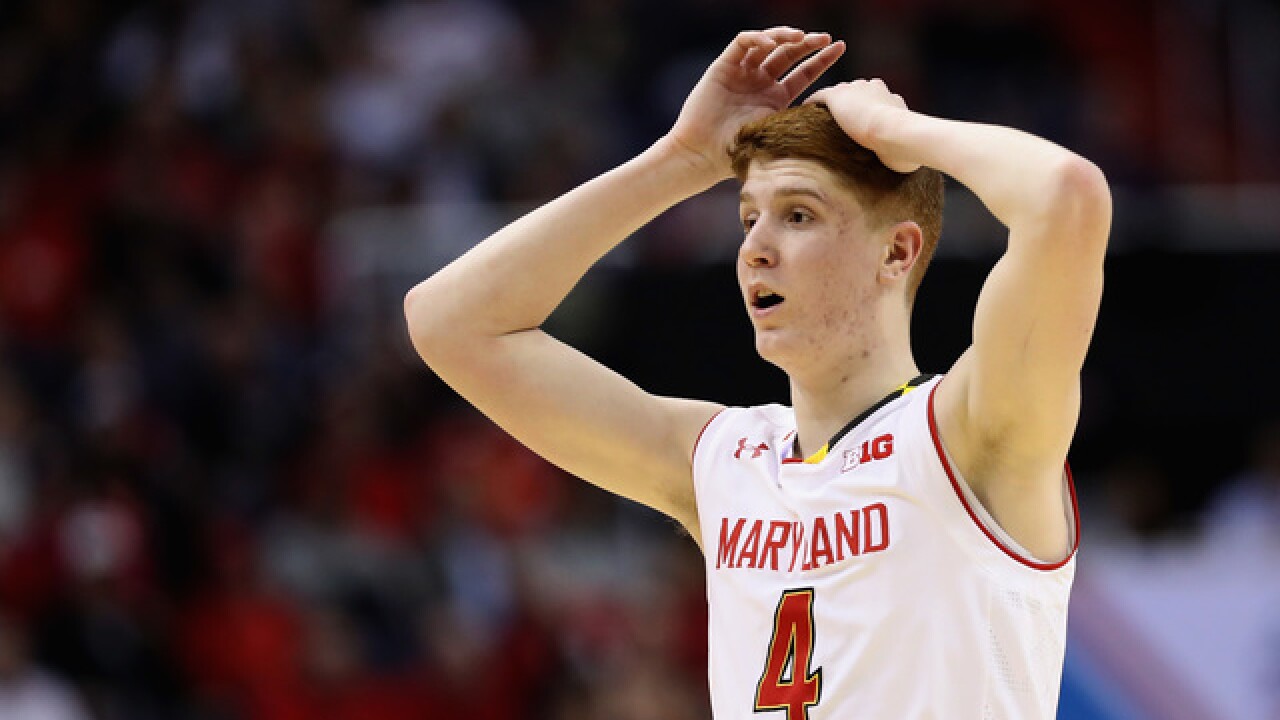 Copyright 2018 Scripps Media, Inc. All rights reserved. This material may not be published, broadcast, rewritten, or redistributed.
Rob Carr
<p>WASHINGTON, DC - MARCH 10: Kevin Huerter #4 of the Maryland Terrapins reacts to a call against the Terrapins during the second half against the Northwestern Wildcats during the Big Ten Basketball Tournament at Verizon Center on March 10, 2017 in Washington, DC. (Photo by Rob Carr/Getty Images)</p>

Kevin Huerter is leaving the Maryland Terrapins men's basketball program and heading to the NBA after two seasons in College Park.

The Maryland guard announced Wednesday that he will forgo his final two seasons of collegiate eligibility and remain in the NBA Draft.

“First off, thank you Terp Nation...for everything," said Huerter via social media. "The last two years playing for Maryland, and at XFINITY Center has been a dream come true. To all my teammates, past and current, not much needs to be said; you’re all my brothers. I waited [until the] last minute because I truly didn’t know what I was going to do. I love College Park, playing for Coach Turgeon, and everything else that comes with being a student at Maryland. But, I will be keeping my name in the draft, with the intent to hire an agent.”

BREAKING: #Terps Kevin Huerter posts on social media that he is hiring an agent and keeping his name in the #NBA Draft. pic.twitter.com/nFVPwP1JnZ

“Kevin has made a significant impact on our program during his two seasons in College Park,” said head coach Mark Turgeon. "He has worked extremely hard to put himself in this position to be drafted by a NBA Franchise. Kevin is an outstanding young man who comes from a great family and has a bright future ahead of him. This was a difficult decision for both Kevin and his family knowing how much he loved Maryland and enjoyed college. However, Kevin took his time and gathered the necessary feedback provided by NBA teams to make the best decision. We’re excited for Kevin as he pursues this next step in his career.”

Huerter was named an All-Big Ten Honorable Mention selection after compiling one of the top three-point shooting seasons in Maryland history as a sophomore. Huerter’s 41.7% three-point field goal percentage ranked ninth in the Big Ten this season, while his 14.8 points per game were second on the team and 16th in the conference. Huerter’s 73 threes are tied for the fifth-most ever in a season by a Terrapin.