Baltimore's Jalen Smith leading No. 15 Terps into rematch with No. 18 Iowa 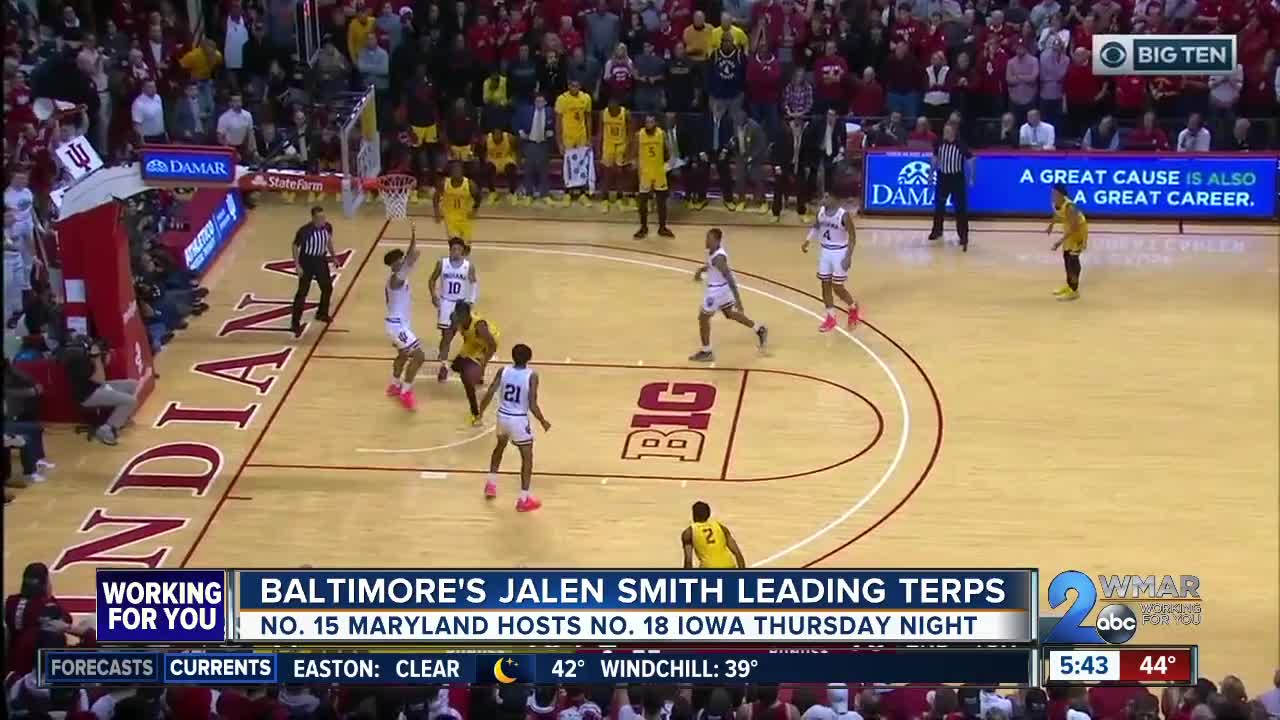 The sophomore forward from Baltimore is coming off Sunday’s career-high 29 points, and game-winning shot, in a one point win at Indiana. That eclipsed the previous career-high 25 points he set just days earlier in a comeback victory at Northwestern.

COLLEGE PARK, Md. — Jalen Smith is on a tear.

The sophomore forward from Baltimore is coming off Sunday’s career-high 29 points, and game-winning shot, in a one point win at Indiana. That eclipsed the previous career-high 25 points he set just days earlier in a comeback victory at Northwestern.

“Personally, I don’t even think he’s reached his peak,” said guard Darryl Morsell, who is a Baltimore native and played with Smith at Mount St. Joseph High School. “Jalen is just an impactful player that just affects the game in so many ways.”

Smith has reached a level emotionally we’ve never seen before. Following the win over the Hoosiers he was animated. He taunted the Indiana fans. Head Coach Mark Turgeon ran over to calm him down. Both apologized after the game.

“He’ll learn from what happened Sunday and he’ll be better with it,” said Turgeon. “But, I don’t want to take away the emotion and the enthusiasm that he needs to play with. He’s just got to channel it the right way.”

We’ll see if Smith can post a career-high in points for a third consecutive game Thursday night when the No. 15 Terps host No. 18 Iowa.

Maryland just lost to the Hawkeyes 67-49 on January 10. Iowa big man Luka Garza went for 21 points and 13 boards in that game.

“To me [Garza’s] been player of the year in the league so far and he’s a tough load. So it’s another really tough matchup for Jalen,” said Turgeon.

“We’re not going to get caught up in it being a game of getting back, like a revenge game with Iowa,” said Morsell. “We’re just going to come out and try to play how we play.”

Tip-off Thursday night at Xfinity Center is set for 8:30 p.m.