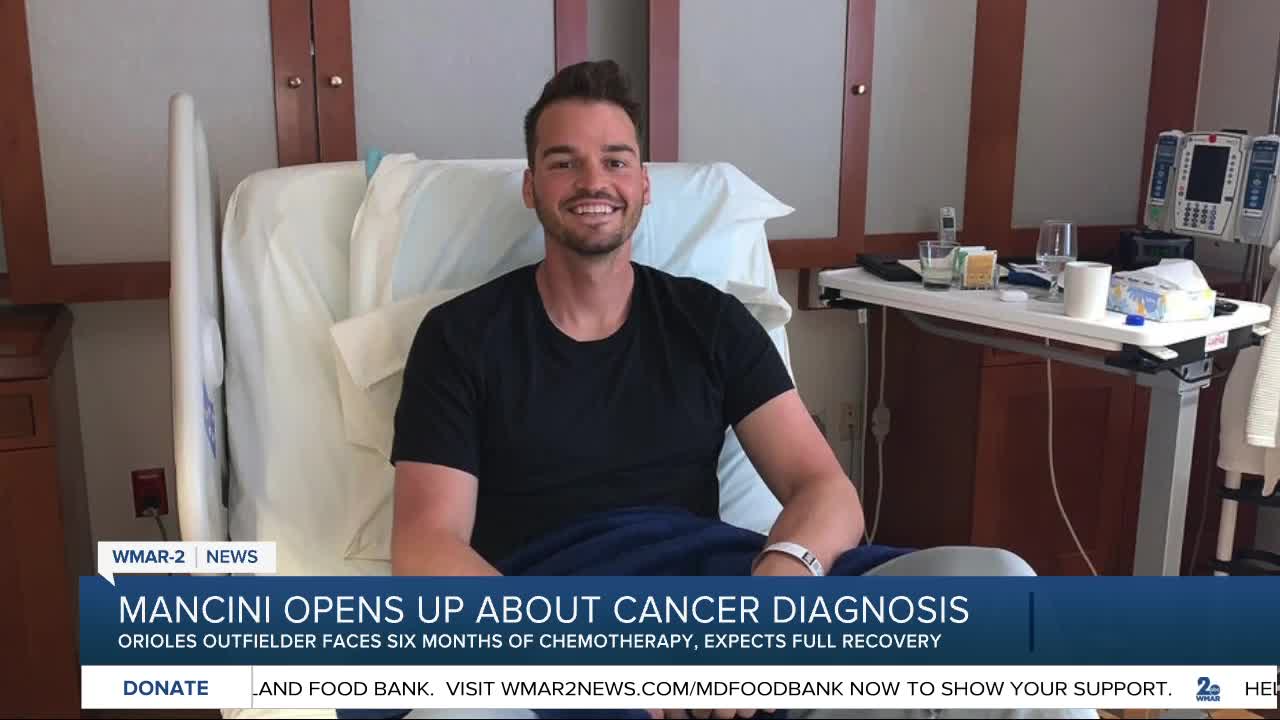 If and when baseball returns this year Trey Mancini said it will probably be without him. That’s because he’s battling Stage 3 colon cancer.

BALTIMORE, Md. — If and when baseball returns this year Trey Mancini said it will probably be without him. That’s because he’s battling Stage 3 colon cancer.

On Wednesday the Orioles’ best player talked about what he’s going through.

In typical Mancini fashion he was upbeat and positive speaking about what he described as a whirlwind last couple of months.

He was also thankful.

"If I didn't have a blood test or didn't play baseball or have the medical care that we do with the Orioles I would not have caught this in time and I feel pretty confident that it would have progressed another stage, which obviously would have been pretty devastating," he said.

The 28-year-old face of the Orioles franchise opened up about his cancer diagnosis and what his recovery now looks like. Mancini was told he had cancer on March 6. He had surgery to remove it on March 12. It was early Stage 3.

"From the second I got the diagnosis I knew I had to accept it pretty quickly and I think that’s helped me a lot," he said. "I didn’t really mope around too much. Don’t get me wrong, it was really tough, especially the first few days and talking to the team was really tough, too."

Wow. Great hearing from #Orioles OF Trey Mancini. Battling Stage 3 colon cancer. So upbeat, positive and thankful. "If I didn't have a blood test or didn't play baseball or have the medical care that we do with the Orioles I would not have caught this in time." @WMAR2News #MLB pic.twitter.com/KnMzgKQHJT

He is now facing about six months of chemotherapy.

"I’m going every other week. I started April 13. So, every other Monday. I just went April 27 so I’ll go again in two weeks."

The trips to the hospital are different. He is alone. He is not allowed any company or visitors due to the COVID-19 pandemic. Mancini is fine with that. As for his baseball future, he intends to once again run down the Orioles' opening day orange carpet.

"I fully expect to make a full recovery and be back. Even throughout the chemotherapy I’m going to be doing things - everything I can to stay in shape and try to maintain my strength and all that - and you have a whole off-season to get ready for next year, too. So, there’s no doubt in my mind," he said.

Mancini added that so far he has about ten days between chemo treatments when he feels well enough to get some physical work in like lifting lighter weights, running and using exercise bands.

He also said that after all of this is behind him he wants to start raising awareness for younger people to get colon cancer screenings and physicals or help get physicals for people who can’t afford them.

On Tuesday Mancini penned an essay for The Players' Tribune.