Maryland among bottom 10 states in timely delivery of benefits

In June, the state came in last place with 14 percent of claimants receiving their first week of unemployment benefits in three weeks. The federal standard is 87 percent and above.

The state improved in July to 23 percent, only beating out Nevada with nearly 22 percent. 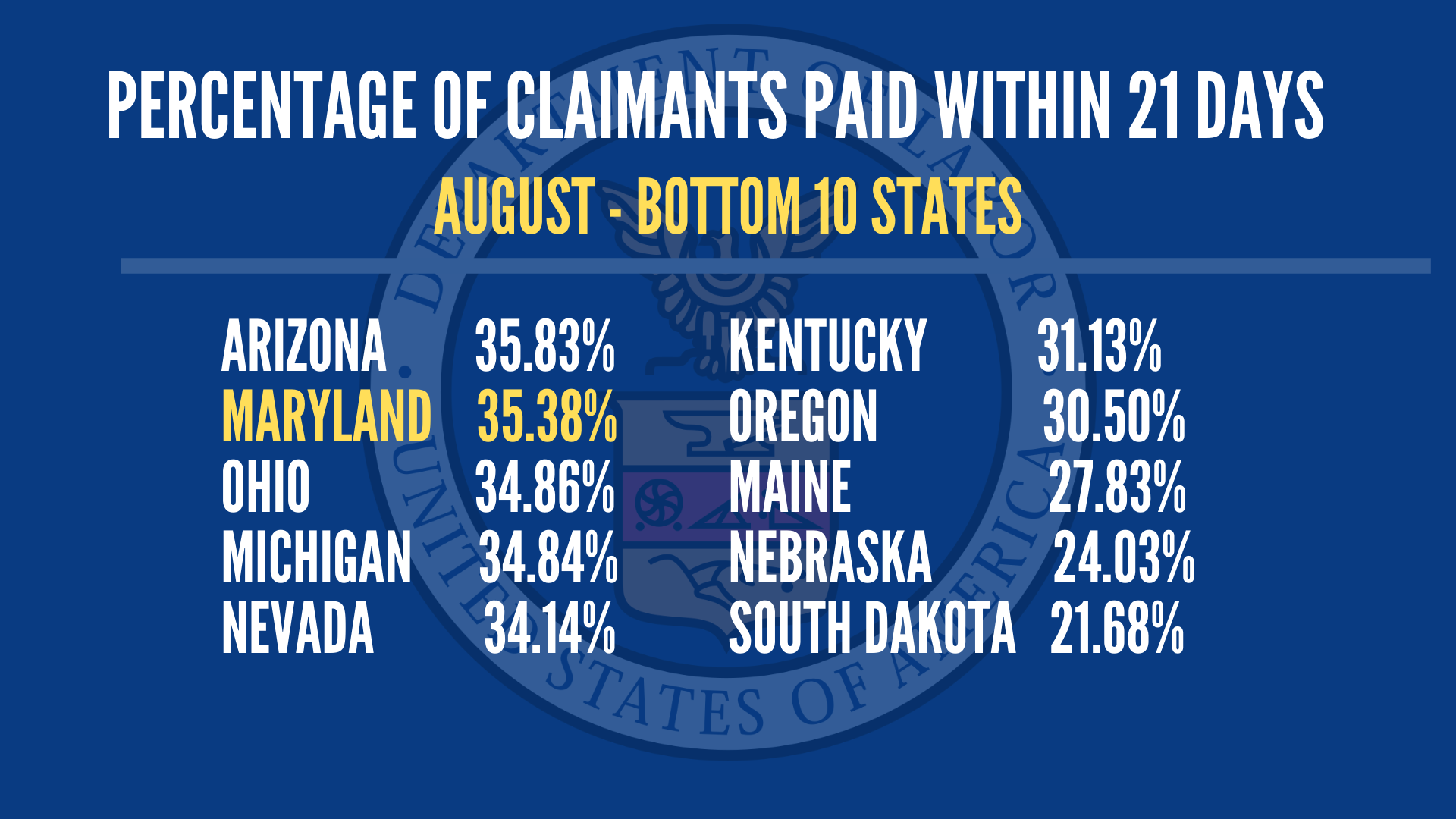 In August, Maryland paid 35 percent of first payments within 21 days. While this is an improvement, the state remains among the bottom 10 states, and claimants, like Brandon Haskins, are still waiting for their benefits.

The Maryland Department of Labor said it has processed over 91.2 percent of the complete claims that claimants have filed since the beginning of the pandemic and paid out over $7.3 billion in benefits to claimants from March 9 to October 3.

A spokeswoman stated that the first payment data does not paint an accurate picture of how quickly Maryland’s claimants have been paid benefits in recent months due to a claimant’s ability to backdate their claim with the assistance of a claims agent.

“The backdating of both regular UI and CARES Act claims allows a claimant to receive all benefits they are entitled to back to their earliest date of eligibility. However, this impacts the timeliness reported to USDOL because the "clock" starts counting based on the effective date of the claim, not the date the claim is actually filed. If an eligible claimant backdates their claim by 3 weeks, then the day that their claim is filed will already be greater than 21 days for first pay timeliness, even if paid immediately,” she wrote to WMAR-2 News Mallory Sofastaii.

She added that the chart only reflects regular unemployment insurance claims and not the timeliness of first payments for PUA, PEUC, and FPUC claim, which “Maryland has quickly processed and paid because of the streamlined eligibility requirements.”

Maryland adding more call center employees
Meanwhile, many claimants have been unable to reach a live representative by phone.

“Since August 10th, I’ve been trying to reach someone at the unemployment office but just as everyone else in the state, my calls and emails and other inquiry types have gone unanswered,” wrote Julia Smith.

The Maryland Department of Labor said they are increasing the number of employees available through their vendor to answer claimant phone calls by 300. In the coming weeks, they expect to have a total of 575 employees on phones. Fifty of these new employees have already started, and they are also continuing to hire more adjudicators. Many of their call center employees have been cross-trained to adjudicate claims as well.

Over 82 percent of claims flagged and investigated have been confirmed as fraudulent. The department provided the information below: