Maryland among bottom states in timely delivery of unemployment benefits

Nearly six months into the pandemic, and claimants in Maryland are still waiting for the unemployment insurance benefits they need to rebound.

BALTIMORE — Nearly six months into the pandemic, and claimants in Maryland are still waiting for the unemployment insurance benefits they need to rebound.

For several weeks, WMAR-2 News Mallory Sofastaii has requested an interview with Secretary of Labor Tiffany Robinson for an explanation on why legitimate claims frozen in the fraud investigation haven't been restored, and the difficulties many people are still experiencing when trying to speak with a claims center agent. Robinson has not yet agreed to an interview.

State Senator Katherine Klausmeier, a Baltimore County democrat and Senate Chair of the Joint Committee on Unemployment Insurance Oversight, said she continues to hear from claimants waiting on their benefits, and she's unsuccessfully requested weekly updates from the Maryland Department of Labor.

"My phone is still ringing off the hook," said Klausmeier. "I wish the governor would own it and say yes, we have a problem because you can’t fix a problem until you decide there is a problem."

In June, Maryland was the slowest of all 50 states to pay benefits to claimants for their first week of unemployment, according to data from the U.S. Department of Labor. Fourteen percent of applicants received their benefits within 21 days. The federal standard is 87 percent and above.

In July, Maryland was second to last with 23 percent, beating Nevada with nearly 22 percent. 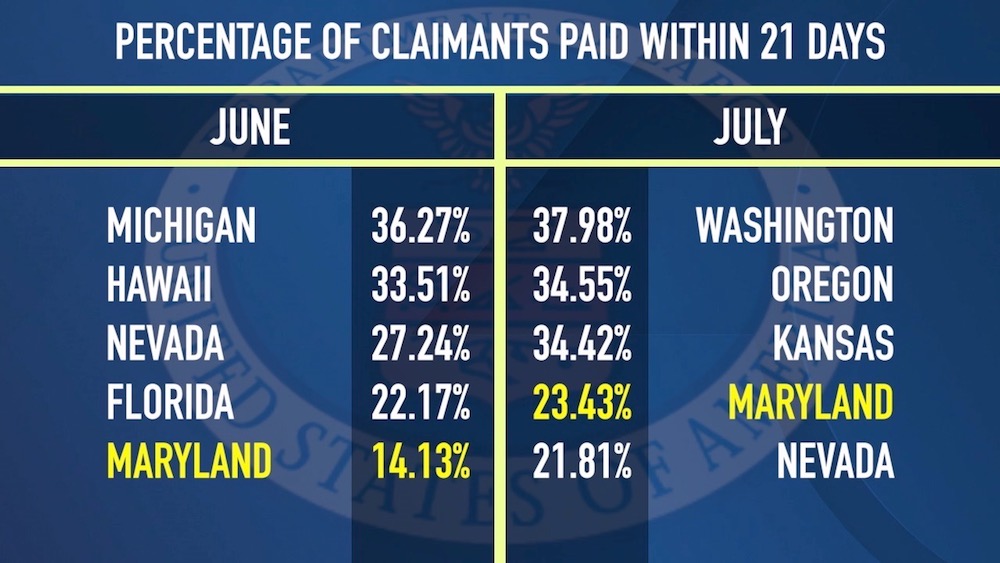 "It just hurts me that our folks are last. My constituents feel like they’re the last and no one’s listening," said Klausmeier.

Klausmeier wants to reassure claimants that legislators are listening, and constituents can contact their elected officals if they’re experiencing issues, however, their powers are limited.

Klausmeier said she's working with a group of legislators to send a memo or letter to the governor asking him to look into other solutions to the state's unemployment problems, and she's considering holding another oversight hearing.

Sofastaii contacted the governor's office and the Maryland Department of Labor for their response to the federal data, but hasn't yet heard back.

In a July, the Maryland Department of Labor reported that 96 percent of unemployment insurance claims had been processed with 78.8 percent of claimants receiving benefit payments.