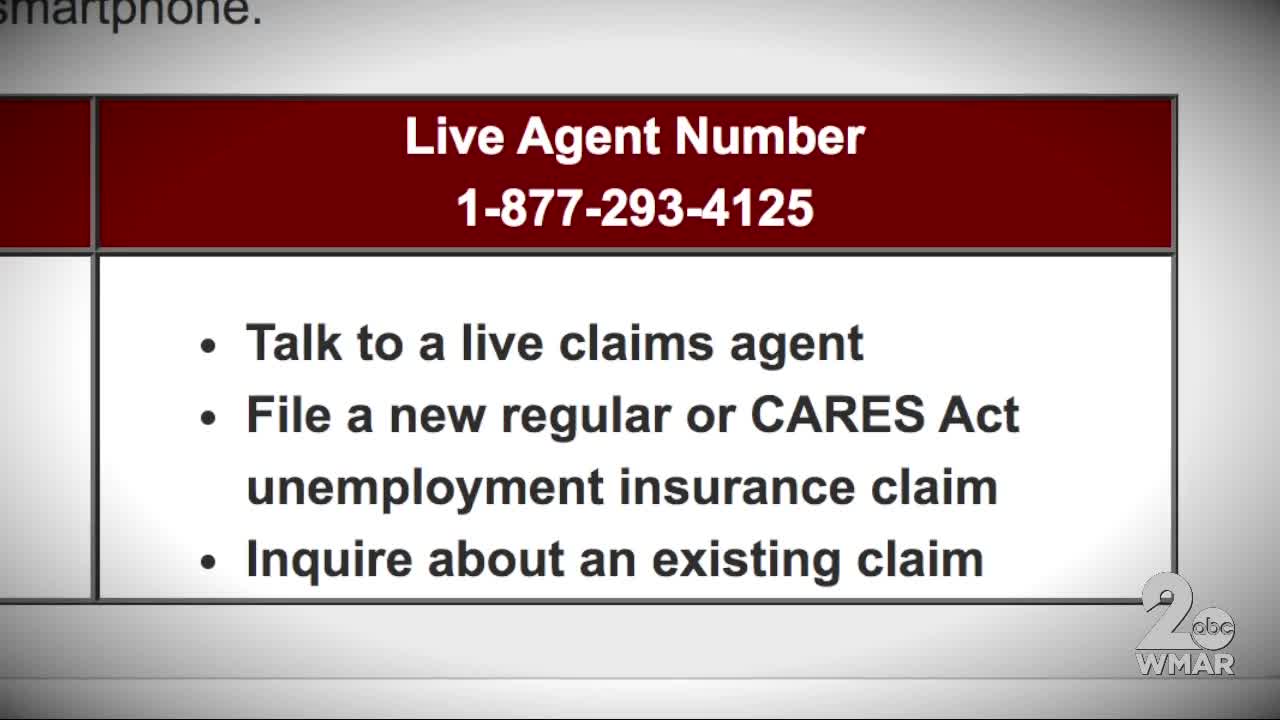 BALTIMORE — Despite the launch of a new phone system last Friday, calls about unemployment insurance claims are still going unanswered.

The Interactive Voice Response (IVR) system allows claimants to file weekly claim certifications by phone, reset their PIN, check on payment status, and a callback feature was added to reduce hours-long wait times. However, many have said that option isn't available to them.

In an email to WMAR-2 News Mallory Sofastaii, a spokeswoman with the Department of Labor explained why:

Accenture’s phone line (877-293-4125) is available for those who wish to speak with a live agent. If a claimant calls during business hours, they may provide a callback number. However, not everyone is receiving a callback option when they connect with Accenture because of the extremely high volume of calls. The system currently stops accepting callbacks when the vendor calculates the number of callbacks will take until the end of the work day to complete and/or if they are calling near the close of business hours. We cannot accept an unlimited number of callbacks because not all customers would receive a same day callback and live agents must remain available to help the customers that have chosen to stay on hold.

Dennis Oldigs estimates he's called over 10,000 times and has yet to speak with a live representative, which is why he decided to go to the Division of Unemployment Insurance's building on Wednesday.

"I feel like it’s just another dead end, another thing that’s making me go crazy. There’s no way to speak with someone, there’s no way to get through, none whatsoever" Oldigs said.

The building's been closed for several months due to the coronavirus pandemic. Even on a normal day, most claim issues are handled by phone.

"Maryland has had trouble with expansion of UI benefits while maintaining compliance with federal program integrity rules such as weekly certifications. But it has been more than two months since the CARES Act was signed into law on March 27," lawmakers wrote. "We understand that many of these applications require adjudication. However, not providing timely updates leaves our constituents desperately frustrated. We therefore request that the Department of Labor develop a process to provide timely information directly to applicants about the status of their applications."

In addition, the lawmakers are requesting a staff member be designated as a liaison to the delegation to better coordinate work by the federal and state governments. To read the full letter, click here.

The Department of Labor issued the response below.

"Maryland was one of the first states in the country to implement and pay unemployment benefits for all three CARES Act programs. Because we acted early, we have paid out well over $1.5 billion in benefits to hundreds of thousands of Marylanders. Two members of our team already serve as liaisons to our congressional delegation, and we have regular calls with lawmakers, where we continuously address the issues they write about."