Several stores in the Nottingham Square shopping center are without power after an underground powerline was struck by a construction crew, the White Marsh Volunteer Fire Company said Tuesday.

The fire company reported the problem on Facebook shortly before 3 p.m. All stores on the Lowes, Target, Best Buy, Panera, and Starbucks side of Campbell Boulevard are affected, the post said. Most of the stores have closed. Some are being powered by generators.

Some businesses also had smoke inside. An underground fire was burning where the line had been struck. Additional fire engines responded to check more businesses for electrical problems or carbon monoxide in buildings. Fire personnel also began checking businesses on the other side of Campbell Boulevard.

Click the picture below to see images from the Nottingham Square shopping center power outage: 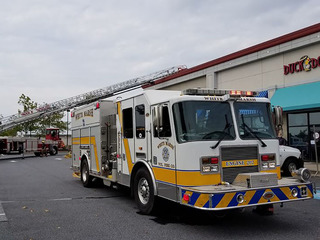