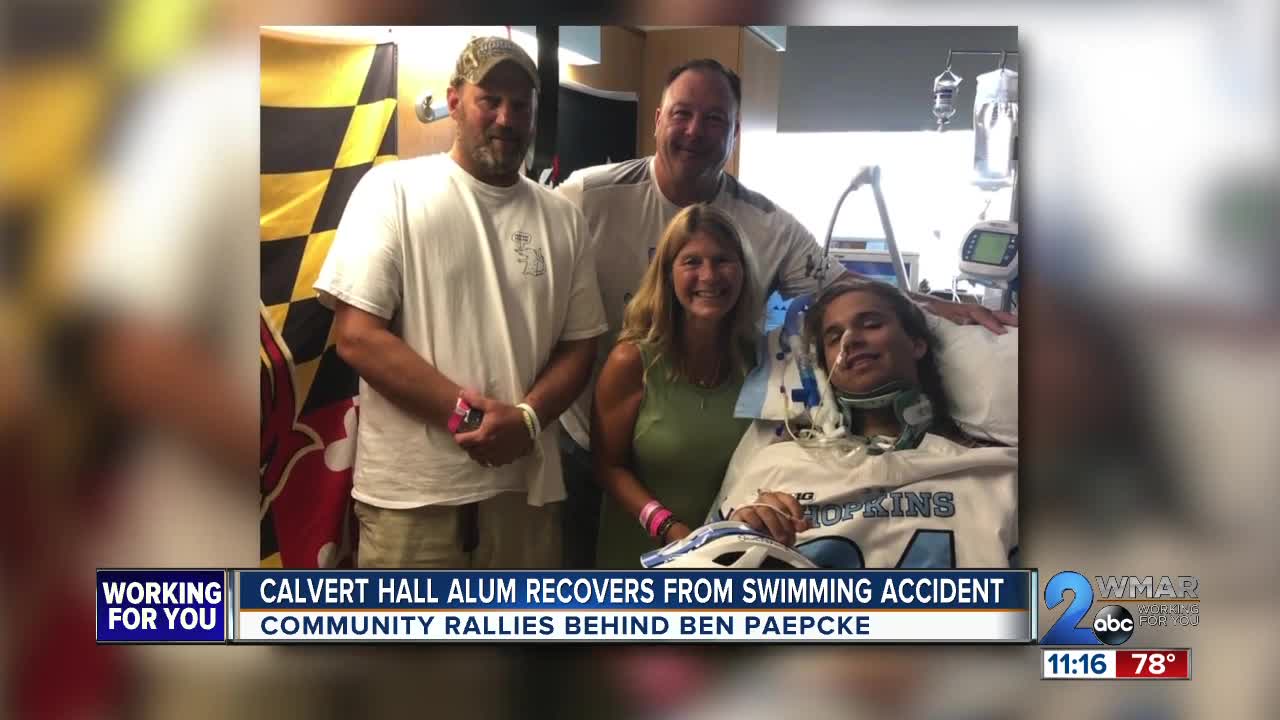 A fun day at the beach turned tragic for a 2018 Calvert Hall graduate. Ben Paepcke shattered his C5 vertebrae and seriously hurt his spinal cord after jumping into a wave at Ocean City on the Fourth of July.

TOWSON, Md. — A fun day at the beach turned tragic for a 2018 Calvert Hall graduate. Ben Paepcke shattered his C5 vertebrae and seriously hurt his spinal cord after jumping into a wave at Ocean City on the Fourth of July.

"Ben is always optimistic, always making jokes. He always lightens up the mood. He’s never one to bring someone down," Furnari said.

Paepcke has been making progress every day at shock trauma. He's gone through two surgeries, had his breathing tube removed and now is slowly able to move the right side of his body.

"He’s a fighter. He’s always been known as somebody who’s not gonna give up, somebody who’s not gonna give in to any trial or tribulation. We've absolutely seen just the resolve in him, the fight that he puts day in day out,minute by minute hour by hour," said Michael Clark, Paepcke family spokesperson and Director of Campus Ministries at Calvert Hall.

"He was just a huge personality at Calvert Hall," Clark said. "The brotherhood at Calvert Hall is quite strong and I think we’ve seen that after Ben's accident."

Dozens of friends, former teachers and lacrosse coaches have visited him in the hospital.

"I think it’s a testament to Ben's personality and who the Paepckes are," Clark said.

Now, they're all staying by his side as he fights to get back on his feet and eventually, back on the field. "He's gonna keep fighting and he'll make it through," Furnari said.

Friends made bracelets and shirt to show their support. The back of the t-shirts have a lacrosse helmet and show Paepcke's long hair. To buy one, click here.

The family also started a GoFundMe to support his recovery, click here for more information.

Family and friends are also holding a ‘Pies for Pap' fundraiser next Thursday on July 25 from noon to 8 p.m. at Earth, Wood, and Fire in Baltimore County; 50 percent of every pizza bought will be donated to Ben’s recovery.