Governor's race could play a role in voting 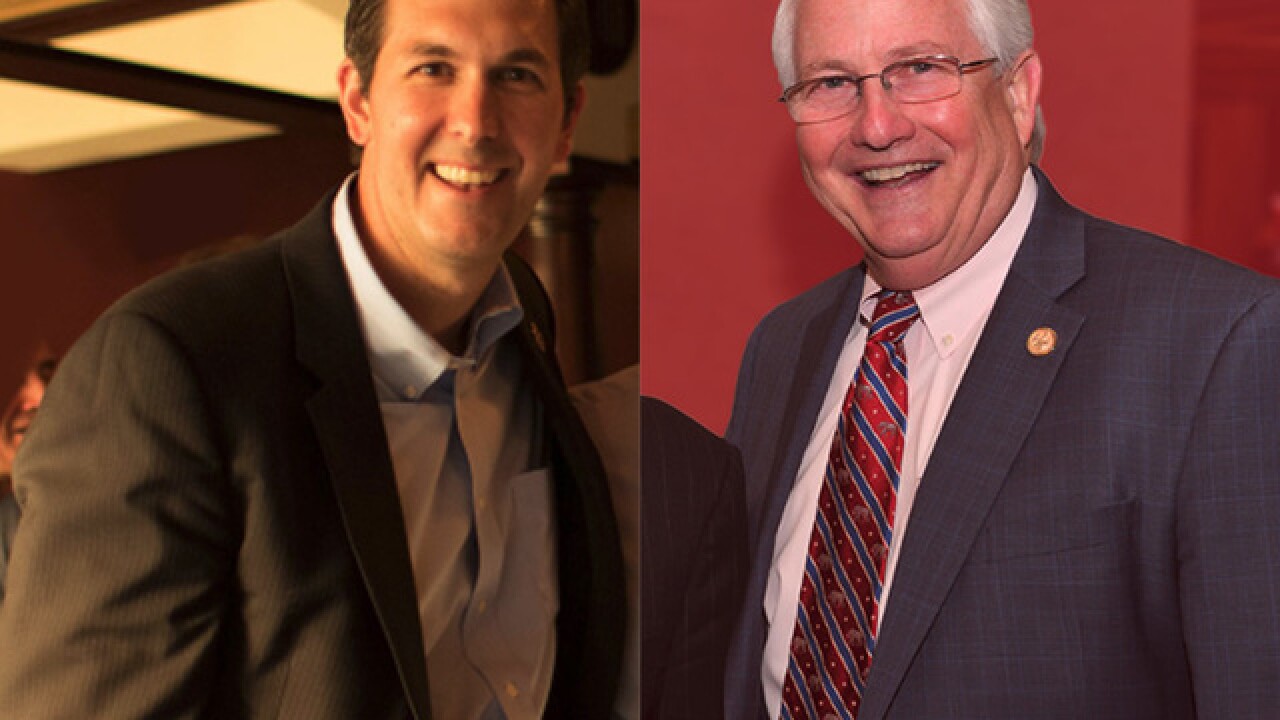 Copyright 2018 Scripps Media, Inc. All rights reserved. This material may not be published, broadcast, rewritten, or redistributed.
<p>Johnny O (left), Al Redmer (right) - Photos from both of their campaign websites</p>

One of the most difficult contests to forecast in the upcoming election is the race to become the next Baltimore County executive.

The previous executive, Kevin Kamenetz, died suddenly of a heart attack earlier this year.  Chief of Staff Don Mohler took over the office, but Mohler is not running; so there is no incumbent in this race.

Instead, Democrat John Olszewski is taking on Republican Al Redmer.  They’re both lifelong residents of Baltimore County; Redmer is from Perry Hall, Olszewski is from Dundalk.  They both served in the House of Delegates - Olszewski for eight years, Redmer for 12.  And they both survived tough primaries for the right to compete in the general election.  They even use similar terms when talking about why they want the job:

“I love Baltimore County,” Redmer said.  “It's a beautiful place, but we could do better.”

They both say they want to make the county’s budget process more transparent, attract new jobs and bring the county's schools up to date.

In Baltimore County, 10 schools did not have their first day of school until the second week.  The schools don’t have air conditioning, and hot temperatures meant hundreds of students missed four full days of school to start the school year.

Olszewski said one issue leading to crumbling buildings was a spending decision made by the county's previous school superintendent.

“I'm all for use of technology in the classroom but we spent $300-million on a laptop program for all of our students at a time when kids didn't have air conditioning fully up and running, we have schools with brown drinking water,” he said.

Redmer said the 10 schools could still have opened on time, if Kamenetz had accepted an offer from Governor Hogan to provide portable air conditioners as a short-term solution.

“Our county executive, who was running for governor, did not want to be in a position where he was subservient to the governor even though it was the right thing to do for the children of Baltimore County,” Redmer said.

Both candidates say if elected, one of their first priorities would be to bring the county's old school buildings into the present day.

“Under a Redmer administration those partisan political battles are not going to happen. We're going to seek common sense solutions and do what's best for the citizens of Baltimore County,” Redmer said.

“What we need is leadership who is willing to become transparent but also prioritize those needs and be very clear about where those dollars are going so that it doesn't become political,” Olszewski said.

Olszewski is a former teacher, and he's been endorsed by the union representing teachers in Baltimore County.

“By investing in our schools we're going to see more people move here, stay here,” he said.  “We'll see property tax (collections) rise. We'll grow our county. That's the first point. And if we don't invest we're going to see, I think, a decline because the first question people ask when they decide to move or stay in a community is 'What are the schools like?'"

But to avoid raising the property tax rate - to fund that investment - Olszewski said he would work with the state to secure money that's been promised for education and find more efficiencies in Baltimore County's $3.2-billion budget.

“I think taxes should be the absolute last thing that we should turn to,” Olszewski said.  “And part of why I'm running for executive is to make our budget more open and accessible and transparent, putting it online, showing people where the revenue is coming from and how it's being spent.”

As of June - there were 306,969 Democrats registered to vote in Baltimore County, compared with 142,029 Republicans, according to the Maryland State Board of Elections.  No Republican has won the office of Baltimore County executive since 1990.  Redmer hopes to change that.

Redmer is Maryland's insurance commissioner.  But he says if elected he would lean on his experience in the private sector, starting and running companies in Baltimore County.

“What is it that should have been done that has not been done?  Step two, we need to quantify, we need to put a price on what it's going to cost to fill those unmet needs,” Redmer said.

Despite that margin, Olszewski says he is not focusing his campaign on Democratic voters alone:

“I take no voter for granted.  We will absolutely reach out to every single voter,” he said.

He may have to.  Because on November 6th there will be another name on the ballot - Larry Hogan.

It's safe to say that Al Redmer has tied his campaign - tightly - to that of Larry Hogan.

Our interview with Al Redmer lasted about 15 minutes.  In that time, he mentioned the name "Larry Hogan" not once..

“If you like Larry Hogan then I'm your guy"

“Larry Hogan and Al Redmer for the next four years will be a great thing for Baltimore County.”

For John Olszewski, the strategy is different.  On Sunday, there was a news conference in Baltimore City, featuring dozens of the state's top Democrats, including Ben Jealous.

Olszewski did not attend the event.  A spokesman for his campaign said the candidate had a previously scheduled meeting at that time, and he also said Olszewski had dad duty (His daughter is two years old).

Olszewski said he does support Democrats on the ballot, but he has not committed to making campaign appearances with Ben Jealous.

Olszewski said during his eight years in the House of Delegates, he earned a reputation for working across the aisle.  He says that would continue if he wins, and Governor Hogan keeps his job:  “I could work with a Governor Jealous, I could work with a Governor Hogan,” Olszewski said.  “I have a long history of showing it doesn't matter who is in that role for me, because ultimately it's about driving results for the residents of Baltimore County.”

That’s a fact he plans to continue hammering home to both Republican and Democratic voters in Baltimore County.

For Olszewski, if Governor Hogan maintains his huge lead in the polls the election could come down to whether he can convince voters in Baltimore County to split their ticket.

“People aren't voting for us based on what other candidates are doing up or down the ballot,” Olszewski said.  “They're going to look at our race and, I believe, make a decision based on what's happening here in Baltimore County.”