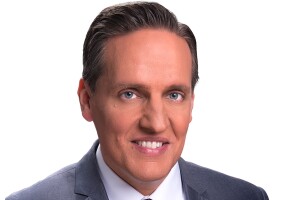 In May of 2016, Christian Schaffer was named the co-anchor of Good Morning Maryland, after spending 10 years reporting for WMAR-2 News in Baltimore.

Christian grew up in Prince George’s and Calvert Counties, playing soccer and baseball for his schools and club teams. Before his career in television news, he worked at a crab house, a wellness office and a pizza delivery chain. If you ever meet Christian in person, feel free to ask him how much money he made as a pizza delivery driver on the night of the OJ Simpson slow-speed chase…

Christian attended the University of Richmond, where he got a first-hand look at journalism and mass communication. In 1992, the university was chosen to host one of that year’s three Presidential Debates. Christian got to volunteer with CNN, working behind the scenes on the network’s debate coverage. He went on to be a reporter, and eventually the managing editor of the university’s student newspaper, “The Collegian.”

But he had been bitten by the television news bug, and in 1994 Christian started an internship at the ABC affiliate in Richmond, WRIC. That led to a job after he graduated, working on the assignment desk. Soon he was producing newscasts for WRIC, and in 1997 he was hired as a producer for the Fox affiliate in Greensboro, North Carolina, WGHP.

Two years later it was time to move again, and Christian took a producing job with WHDH in Boston, which at the time was that city’s NBC station. After a couple years of producing morning and evening newscasts in Boston, Christian decided it was time for a change. In 2001 he started a graduate program at Boston University’s College of Communication. He earned a master’s degree in broadcast journalism, and began looking for on-air reporting jobs.

The search led Christian to Harrisburg, Pennsylvania. In 2003 he was hired as a reporter at WHP, the CBS affiliate in Harrisburg. He covered politics, crime, fires, floods and whatever else you can think of for that station’s evening newscasts. In 2005 Christian provided extensive coverage of the “Intelligent Design” trial, which brought national attention to the federal courthouse in Harrisburg.

His final move happened less than a year later. In June of 2006 Christian came to Baltimore, and started working as a reporter for WMAR’s 11pm newscast. Over the next 10 years he covered just about every big story his home state had to offer, from state and local politics to crime, severe weather and breaking news.

In 2012 Christian provided extensive live coverage from Charlottesville, Virginia, of the murder trial of the man who was eventually convicted of killing University of Virginia student Yeardley Love, who grew up in Baltimore County. Christian has covered the cases of people who died in police custody in Baltimore City, including Anthony Anderson, Tyrone West and Freddie Gray – and he reported live from Mondawmin Mall during the unrest in Baltimore that started after Gray’s funeral.

He covered the post-conviction hearing of Adnan Syed, the man convicted of killing his ex-girlfriend Hae Min Lee back in 1999, whose case was featured on the podcast “Serial.” Syed was granted a new trial, which remains in the appeal process.

Christian also covered the Baltimore Orioles’ playoff run in 2012, with live coverage from the Wild Card win in Texas, and from New York for the Orioles’ series against the Yankees. He watched Nate McLouth’s fly ball hit the foul pole at Yankee Stadium in Game 5, which meant that it should have been called a home run, but was not.

In 2013 Christian spent a week in New Orleans covering the Baltimore Ravens’ trip to the Super Bowl. He was in the Superdome when the lights went out, and on the field interviewing players after the Ravens secured the franchise’s second Super Bowl win.

Now, you can watch Christian, along with Ashley James, Lynette Charles and Lauren Cook on Good Morning Maryland, every weekday morning from 4:30 to 7a.m.

Christian lives in Baltimore with his wife and daughter, who are both amazingly patient with his sleep schedule. He enjoys reading, trips to the beach and from time to time he’ll play a round of golf, poorly.