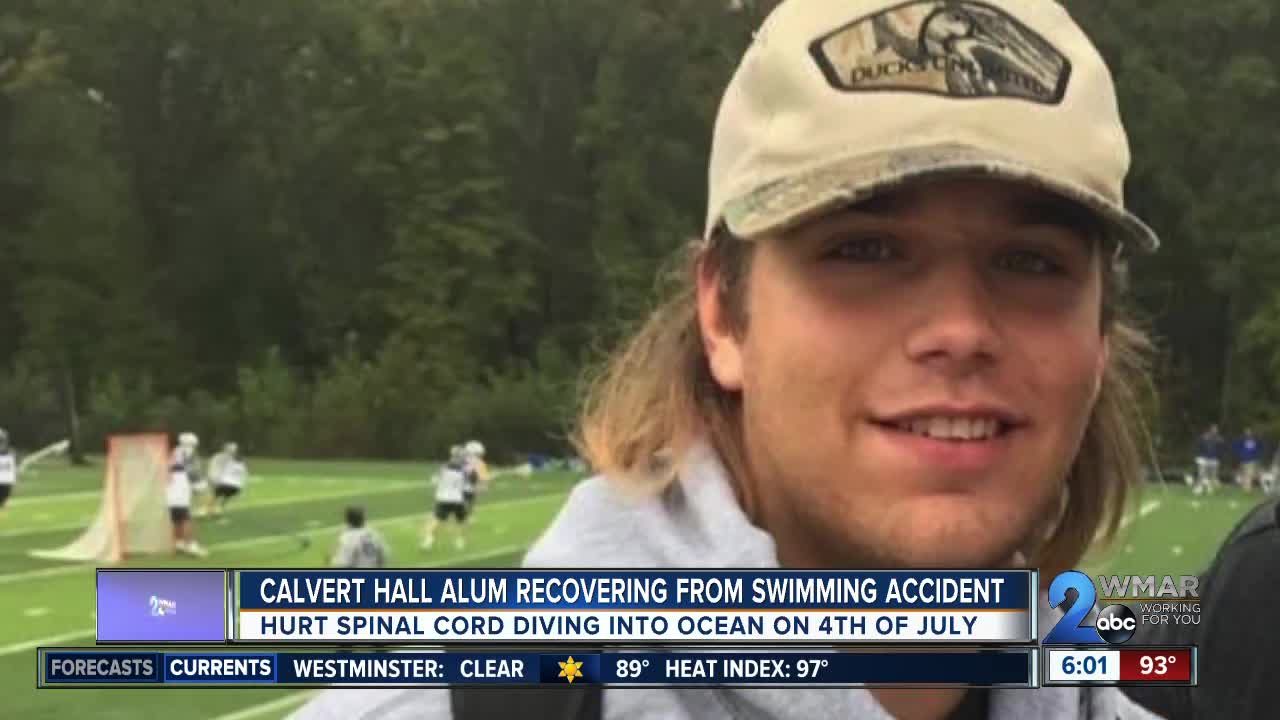 What should have been a relaxing Fourth of July at the beach and a refreshing dive into the ocean turned into tragedy.

TOWSON, Md. — What should have been a relaxing Fourth of July at the beach and a refreshing dive into the ocean turned into tragedy.

"All he was talking about was wanting to get into the water," said Joey Furnari about his best friend Ben Paepcke, who was at the beach with him. "I dove in first and I realized how shallow the water was. I thought to myself, 'I hope no on got hurt' and that's when I turned around and saw Ben face down in the water... it was very terrifying."

"He said the sand was just so hot so they were just trying to run as fast as they could into the water. He dove and the last thing he remembers is, 'Did I just break my neck?'," said Michael Clark, spokesman for the Paepcke family and Director of Campus Ministries at Calvert Hall College High School.

Ocean City life guards rescued the Baltimore County college sophomore from the water. He shattered his C5 vertebrae on impact and seriously hurt his spinal cord.

Two surgeries later, Ben's at Shock Trauma and is making progress every day.

"He finally got the breathing tube out, and it is something that he was really happy about because now it's so much easier for him to communicate. He can mouth words so you can read his lips a lot easier," said Clark.

Ben is slowly gaining mobility on the right side of his body, but the Calvert Hall alum has a long road to recovery ahead of him. He hasn't been able to break his fever yet.

"I think if Ben could say anything, he would want people to know that he's a fighter and he's gonna make it," said Furnari. "He’s always optimistic, always making jokes."

Ben graduated from Calvert Hall in 2018 and continued playing lacrosse at CCBC Essex.

"He stood out; he was a really good player," said Furnari.

And he hopes that one day he will make it back on the field again.

But he's also making the best of his time in the hospital. After hearing about the Baltimore Police officer that was shot in the city on Monday ...

"Ben was like, 'I really hope they put him next to me' and I got there late last night, and that's exactly where the officer was. Right next to Ben's room. Ben has a Blue Lives Matter flag hanging above his bed... so last night when there were a ton of people from the force visiting obviously Officer Shiflett, there were a ton of people also visiting Ben," said Clark.

He's had many visitors stop by his room to meet him.

"The Johns Hopkins [lacrosse] Head Coach reached out came and named Ben an honorary Captain so I think the outpouring love and prayer for Ben and his family is something the family is extremely grateful for and is actually getting them through what is really a hard time," said Clark.

To continue supporting Ben and his family, his best friends made t-shirts and wristbands as a fundraiser because Ben will need to transfer to a rehabilitation center to continue his recovery.

"It brought a tear to his eye," said Furnari.

The family also started a GoFundMe to support his recovery, click here for more information.

Family and friends are also holding a ‘Pies for Pap' fundraiser next Thursday on July 25 from noon to 8 p.m. at Earth, Wood, and Fire in Baltimore County; 50 percent of every pizza bought will be donated to Ben’s recovery.