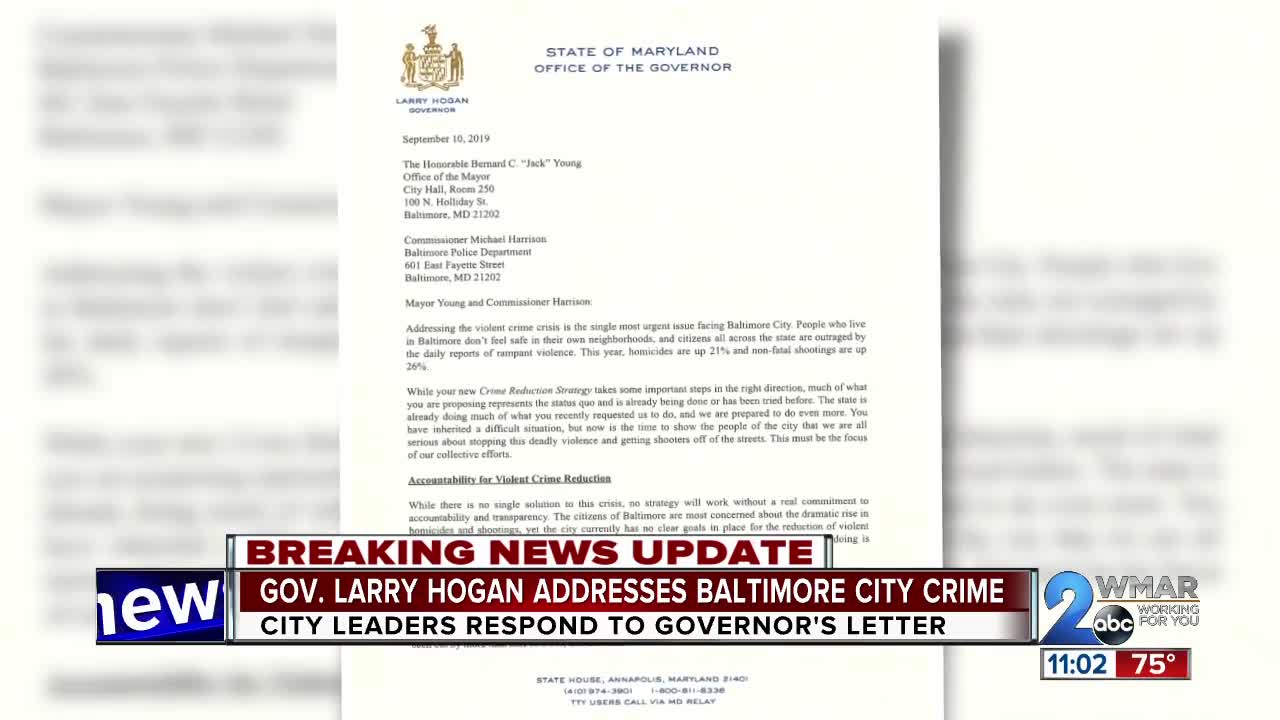 Now, Governor Larry Hogan demands more. He sent a four page letter to the Mayor’s office and the police department. The spokesperson for the Baltimore Police Department said the Commissioner won’t respond until Mayor Young does.

Baltimore City Council President Brandon Scott said his office didn’t receive the letter either. He was able to review the letter by looking at a copy given to the media.

“The Governor and I share goals, the common goal of reducing violence in Baltimore but I think the way that this was delivered seems that it‘s more about capturing political points than obtaining those goals,” said Scott.

The Governor’s letter addresses stricter sentences for repeat offenders and giving the city $21 million in funding.

"That’s money that should have never been held back in the first place. That’s money to aid the police department,” explained Scott.

The police department is a state run agency.

The Governor also addressed air support, stressing his support for a surveillance plane.

“I hope that the Governor talked to the police department itself, the police commissioner himself about their data from when the plane was up before because for him to say in that letter publicly that he wants the plane to come back up simply by listening to someone who essentially is a business man selling a product to the city would be irresponsible,” Scott said.

The Governor also stated he would give the city more state support. Councilman Yitzy Schleifer said they’ve been asking for help from state police.

“We’ve been asking for the state police to handle 83. Right now every time there’s an incident on 83, which is just about everyday, it takes 4-6 police officers from this very neighborhood and puts them on 83 doing traffic control and incident response. Where as the state police are actually handling that further north in the county on the same road,” said Schleifer.

Another major point in Governor’s Hogan’s letter is accountability for crime reduction, which Schleifer says council is doing.

“We have different benchmarks that we’re gonna be holding the police department to as far as implementing a plan. There’s been a lot of plans in the past there has not been a lot of implementation of those plans so that’s the role that the council really has is to publicly hold hearing and make sure that the police department is reaching those benchmarks and the consent decree is also holding the police department to certain benchmarks,” said Schleifer. "Between the combination we want to see momentum every single month that we’re moving forward and moving in the right direction and that should also correspond to what’s going on in the streets.”

WMAR-2 News plans on reaching out to the Mayor and the Police Commissioner on Wednesday to see if they have received the letter and what their response is.

Mayor Young did say he believes the crime plan is working in the city. Governor Hogan began his letter stating the crime plan contains methods that have already been done.