“This is breast cancer, and this is what I spend my day doing,” Dr. Jennifer Flaim said while staring at digital imagines from mammograms as she tries to point out a potentially concerning calcification in the duct tissue of a breast.

As a trained diagnostic radiologist and the Medical Director for Medstar Health Physician Offices in Bel Air, Flaim’s job often consists of long hours scrolling through detailed X-ray images of women’s breasts. The images are created when her patients come in for mammograms, either their recommended yearly examination, or a physician requested screening meant to suss out the potential of breast cancer.

“The reason we do that with mammography is because it’s readily available,” Flaim said. “It’s relatively easy to have accessible in most places. It’s relatively inexpensive, and because the disease process we’re looking for is very common.”

One in eight women will develop breast cancer in her life, Flaim said, emphasizing the utility of routine mammograms as a preventative health measure, particularly since cancer is easier to treat and has better outcomes for patients the earlier it’s detected.

“Most of us ladies have a group of maybe eight friends, so the odds are not really in our favor,” Flaim said. “Everyone gets affected by it, maybe not first hand, but you know somebody, you know somebody who knows somebody.”

Despite recent debates about how frequently women should be screened, Flaim believes the long-recommended practice of a yearly mammogram for women 40 and older, with young women potentially starting early based on factors like family history, genetic predispositions, and early cancer scares. By conducting yearly screenings, it’s easier for doctors to deduce what is normal breast tissue and what might be red flags of potential changes. For women who have been sent for a screening after being alarmed by finding a lump or some other signifier of potential cancer, mammography lets doctors evaluate the potential need for biopsy or further testing.

After becoming commercially available in the early 1970s, mammography has become the industry standard for breast cancer screening. Originally images were created with film, similar to traditional X-rays. The next big leap came when images could be created and examined digitally. But recently, Flaim and her Medstar colleagues are utilizing a technological advancement that produces more thorough screenings.

“Mammography we’ve been using for a very, very long time, but we have this wonderful and exciting newer technology called tomosynthesis imaging, which is commonly called 3D mammography,” Flaim said.

The process is almost exactly the same as what patients are familiar with, Flaim said. A woman would have her breast compressed in a mammogram machine like normal, where it will be scanned twice, once top to bottom, the next side to side. Each scan produces its own two-dimensional image that doctors traditionally evaluate.

The advancement provided by the new technology is the creation of a three-dimensional image “that allows us to scroll through the breast to try to see if there’s things that stand out,” Flaim said. “That’s particularly helpful for women with denser breasts, but it’s really shown to be helpful in essentially every breast density.”

The 3D screenings are made available to all women who come to Medstar for mammograms. A standard evaluation, or a “2D mammogram” is covered by all insurance, and many plans cover this new technology as well. If 3D scans are not covered, Flaim said they tend to cost patients an additional $50 to $60 out of pocket. In many ways the advancement of 3D mammograms is the technological fulfillment of the adage, “an ounce of prevention is worth a pound of cure.”

Utilizing 3D imaging, radiologists like her can more thoroughly examine the data collected in a mammogram and more confidently draw conclusions from what they see.

For a relatively small additionally fee, particularly when compared to the outsized costs of more intensive evaluations or cancer treatment should the disease be present, doctors can be more assured in determining the health of a woman’s breast tissue.

“What that does is reduces the number of call backs so when someone comes in for their routine mammogram, they come in and get pictures and go home,” Flaim says. “That 3D imaging lets us scroll through those areas of question, ‘Is this really something? Is it really not anything?’ So the number of women who get called back for additional screening would decrease from there.”

Breasts pose a particularly unique challenge to medical evaluators, Flaim explained. While most people can confidently point to their elbow, or can easily discern a liver from a kidney or a lung, the definition and location of breasts can be a bit more fluid, and the different sizes, shapes, and densities of breasts make for a lot of variety. That lack of uniformity can make it even more challenging to spot irregularities.

“It’s a more ambiguous part of the body to try to uniformly evaluate,” Flaim said. “There’s basically two normal things we expect to see in the breast, and that’s breast tissue” – the duct work that lets breast fulfill their biological purpose of carrying milk to the nipple, one of the essential things that make us mammals – “the second thing is fat.”

What radiologists like Flaim look for in the images produced by mammograms, both 2D and 3D, are three basic markers that might be signs of cancer: calcifications (white specks or dots made of calcium deposits that are typically benign but can be signs of pre-cancer or cancer), masses (cysts or lumps, again, often benign but potential signs of cancerous cells), or architectural distortions (changes in the structures of the breast that may be the result of developing cancer cells).

“It’s just a very subtle difference in the architecture of the tissue; those tend to stand out a little more on 3D imaging, and those are the most difficult to detect,” Flaim says. “That’s the one that is really tricky because it’s kind of like looking for a snowflake in a blizzard that looks a little different than all the other snowflakes.”

That ability to discern differences among snowflakes played a big roll in Flaim’s career as a radiologist and her championing of 3D breast imaging. To say she has a keen eye for such detail may be an understatement. Well before she was studiously examining the fine details of a 3D X-ray, she showed an innate skill seeing things most others missed.

“From even a young age, I had a very good eye for things like, ‘what’s the difference in this picture?’” Flaim said. “I have a knack for finding sharks’ teeth on the beach. I can pick out the thing that’s different and always have as a little kid.”

Flaim joked that on the rare nights she and her colleagues could go blow off steam during medical school, she could often earn her beers betting people she could beat them in those old bar video games where players had to best each other spotting more differences between two tableaus. As she progressed through her schooling, she realized radiology allowed her to both interact with patients and be analytical, and it allowed her to examine almost any part of the body and help people of all ages, shapes, and sizes.

“Radiology seemed like a really natural choice for something that allowed me a little bit of everything that I loved, plus what was sort of just like a God given gift; I have good eyes,” she said. “It worked out for me in that way.”

After completing her medical degree in West Virginia, Flaim was trained in radiology in Dayton, Ohio, doing her residency through Kettering Health Network. She interned at Case Western in Cleveland, then earned a fellowship in breast imaging at the University of Maryland Medical School in Baltimore. After a brief stint in private practice, she joined Medstar’s radiology department.

She commended her facility’s embrace of the new 3D mammography technology as part of an overall quest to stay on the cutting edge of medical technology. As a radiologist, she is part of a larger team working to create the best outcomes for their patients.

“As individuals, as a practice, we have a breast cancer tumor board weekly where we discuss cases with multiple specialities,” Flaim says, describing a group composed of surgeons, oncologists, radiologists, “anyone who might be involved in that patient’s care from a cancer perspective.”

Much as mammograms became the industry standard, particularly once their effectiveness was proven as detection rates went up and mortality rates went down, Flaim thinks 3D mammograms will become the norm in the near future, with insurance companies standardizing coverage of such exams and 3D scans becoming the default for women during their yearly screenings.

“I think this is a ball that’s going to be rolling. I think the more and more we research it we’re finding it really is helpful for all women, basically for all breast densities. In fact, I think there’s more of a movement towards ensuring that this is covered,” Flaim said. “It took a while to transition from screen film [images] to digital [images], and I think we’re just kind of in that same spot, where we’re seeing definite benefits of it. ….. No, I don’t think that it’s going to be going anywhere.” 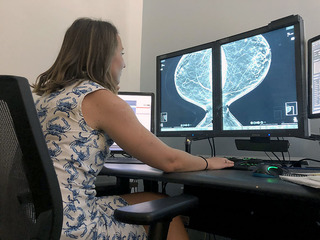