Putting together the pieces: What we know so far about Jacquelyn Smith's murder 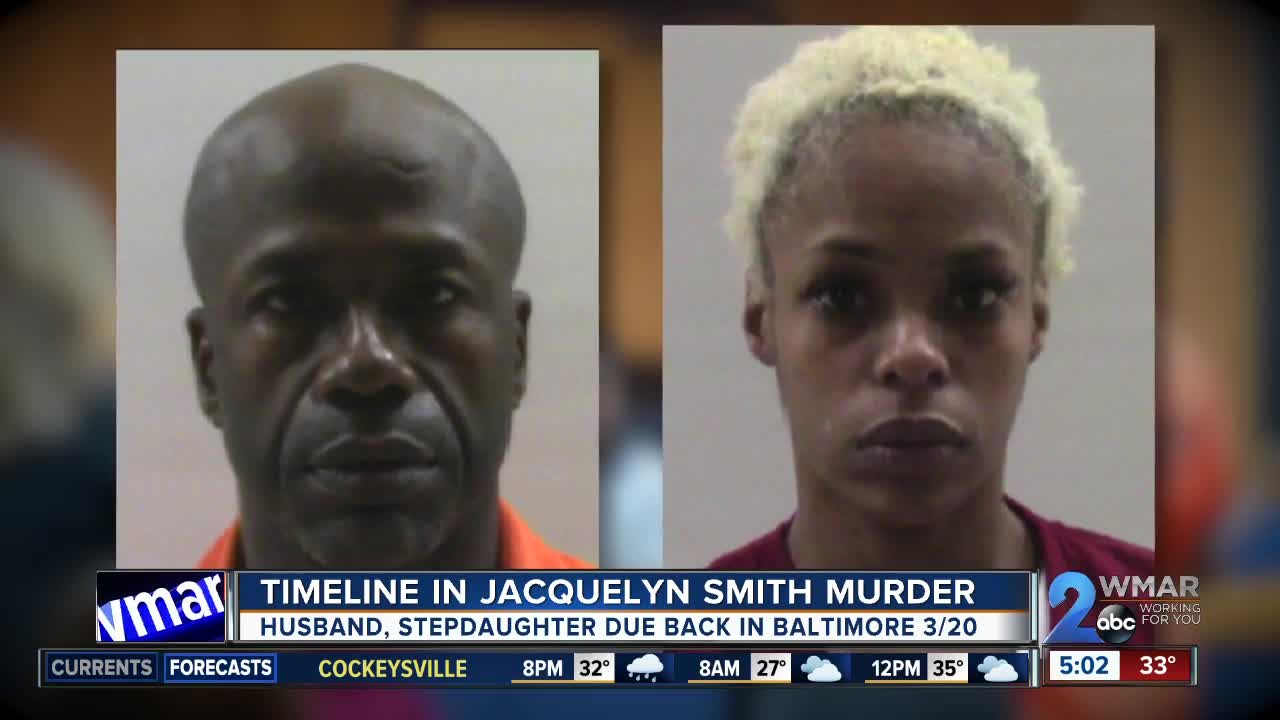 People in the Baltimore area and across the nation were shocked to hear the truth about how Jacquelyn Smith was murdered after months of believing a heartbreaking story. 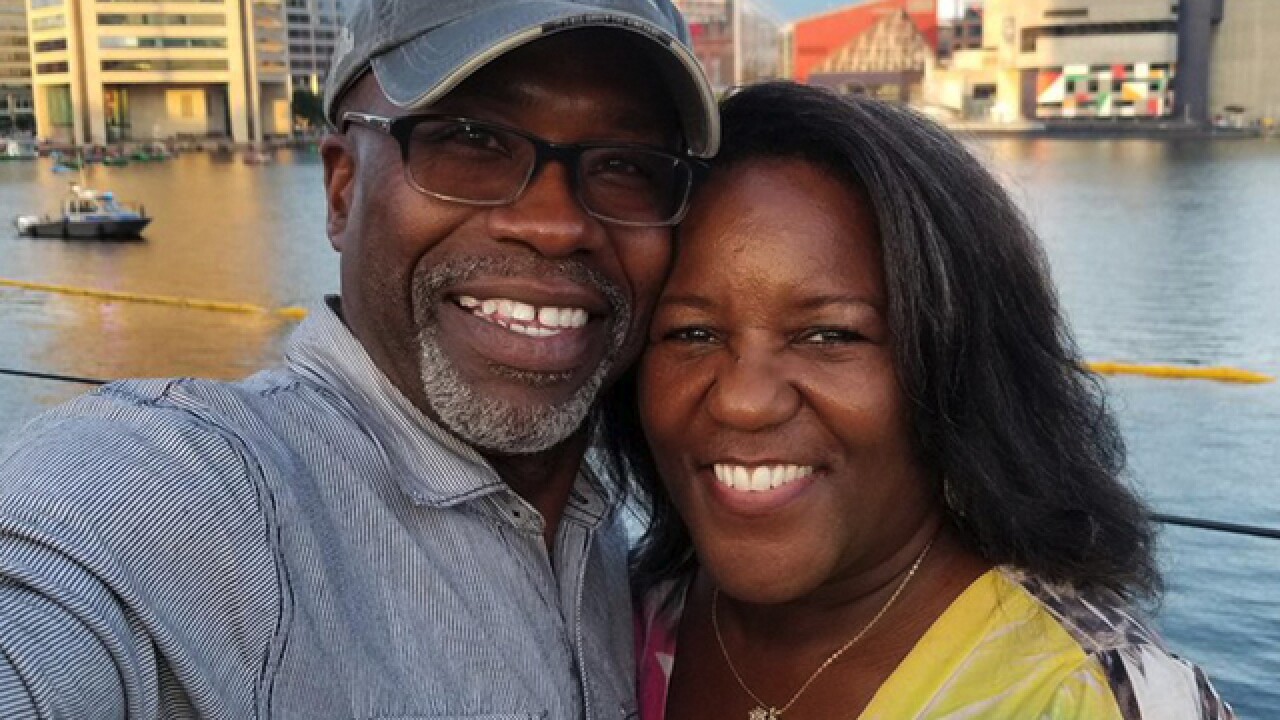 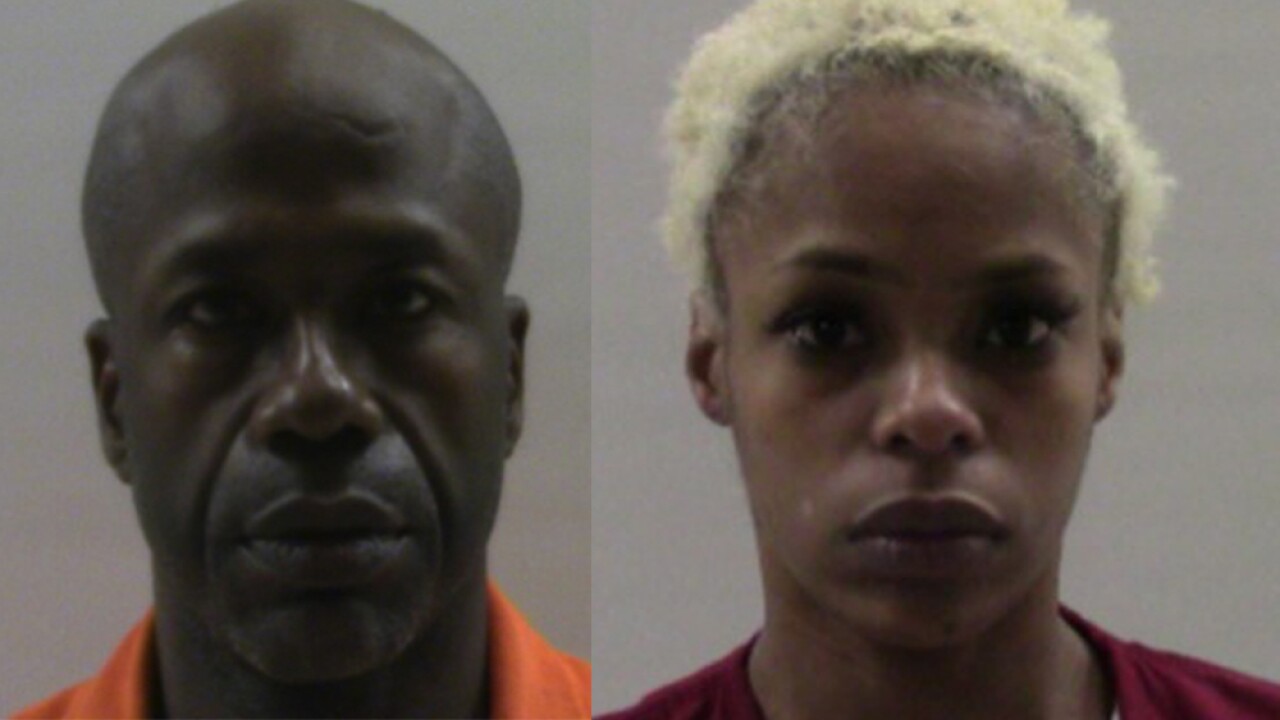 People in the Baltimore area and across the nation were shocked to hear the latest about how Jacquelyn Smith was murdered after months of hearing a heartbreaking story.

On December 1, 2018, Jacquelyn had died after being stabbed by a panhandler who she was giving money to, according to Baltimore Police. Months later it was revealed that her husband and step-daughter were the ones who allegedly murdered her.

“I just want to make sure my father is okay. He has never been through this, now he is a widower. He hasn't eaten, he doesn’t sleep. I am just worried about him. I am just trying to be strong for him,” Valeria said.

They told Brian Kuebler they were celebrating Valeria's birthday at a VFW hall in West Baltimore. Jacquelyn and her husband Keith were on their way to drop Valeria off on the east side of the city when Jacquelyn reportedly saw a woman she wanted to help.

Keith was at the wheel and lowered the window, he told WMAR-2 News, “My wife just felt moved to give her something. So at the stop sign, she waved her over to come on over to the car and out of nowhere some guy came over while walking with her. I hit my window and Jacquelyn went to hand the money out and the guy leaned over and said can I thank your wife? I said you can thank my wife and, within that split second, this guy commits to stabbing my wife...”

Keith said the man snapped off Jacquelyn's necklace while the woman grabbed her purse and ran off. Keith says he chased after the panhandlers before hearing his wife's screams.

“Blood was everywhere. It was something that, it was horrific for something like that to happen. But right now, I am just absorbing all of it,” said Keith.

Her husband drove her to the hospital, where she later died.

Both Valeria and Keith said this tragedy made them think twice about giving to panhandlers, and Keith even vowed to create a law that would ban panhandling and soliciting at every intersection in Baltimore. He said he is going to make that clear to the mayor and that it should be named Jacquelyn's law; he won't give up until it happens.

Watch the raw interview Brian Kuebler did with Keith and Valeria below:

After hearing the shocking news a woman was murdered while giving to others, support flowed in from across the country.

One of the most prominent voices of support came from Oprah Winfrey, who tweeted a CNN link to the story.

This story struck my heart. I’ve done this a 1k times. But will think twice before ever doing again. To J.S. family I hope her death gets people “woke” to change! https://t.co/ZbFqkLsdF9

Support also came from city leaders who were looking to take action, as well as the church she used to go to.

"There's not just one solution to what's happening in the streets but when we have families, people who are trying to help someone in need become a murder victim in the city of Baltimore, we have children getting shot a line has to be drawn," Councilman Brandon Scott, told WMAR 2 News.

“We were actually in service and a lot of people were crying and so forth, but we have consolation from God's Word,” said Bishop Roger Tatuem, “She lived the life of the Lord and in her demise, she's going to heaven, but she'll be greatly missed. People loved her. She was devoted to the Lord, to her husband, to her family. She was a loving person and a helping person.”

But little did they all know, the sad story that Keith and Valeria had told was allegedly a lie.

Almost exactly three months after Jacquelyn Smith was killed, Baltimore Police announced the panhandler story we all heard, was not true.

On March 3, Acting Baltimore Police Commissioner Michael Harrison announced the crime was staged and that Jacquelyn's husband and his 28-year-old daughter had been charged with her murder.

Harrison said police in Texas arrested the Keith and Valeria near the U.S. and Mexico border, after word got around they were trying to leave the country.

"During the course of our investigation, we developed evidence that Mr. Smith was leaving Maryland," Harrison said. "So we made the appropriate national notifications and the Texas State Police arrested him this morning."

READ MORE: Father, daughter held without bail in Texas on charges in murder of Jacquelyn Smith

Until this news was released, police hadn't publicly released any leads in the case. Harrison said the case was solved due to "good detective work".

"People took advantage of Baltimore," Harrison told reporters. "We want to make sure that the truth comes out and justice is done."

The pair were denied bail in Texas and are waiting extradition back to Baltimore. The Baltimore Police Department says the Smiths will be back in Baltimore on March 20.

Charging documents looked at by a Baltimore Sun reporter say Keith was looking to kill Jacquelyn because she was planning on divorcing him. The documents say Keith and Valeria were giving police inconsistent stories, and through various wire tappings and investigations, they were able to conclude that Keith and Valeria were suspects in the murder.

After the news of the supposed ruse was released, information about Keith's Smith's past started to resurface.

Officials say Keith Smith had confessed to robbing the First Union Bank in Timonium on three separate occasions between December 1999 and August 2000.

Smith's robbery spree came to an end on September 1, 2000, when Baltimore County Police spotted a gold Maxima that fit the description of the wanted vehicle involved in a bank robbery four days before. The driver, who was later identified as Keith Smith, led police on a car chase throughout the city when he crashed into a Baltimore City Police cruiser at the intersection of Ashburton Street and Edmondson Avenue in West Baltimore.

Later that day, Smith admitted to committing the bank robberies and went into great detail on how and why he did it.

According to Baltimore County Police reports, Smith told police he had recently found out that he was HIV positive, and that he lost his job at FedEx after racking up too many points on his driving record. He told police he was a single parent and needed money to pay overdue bills.

Smith also told police he robbed the bank the same way each time. He would enter the bank wearing a ski mask, armed with a pellet gun, and ordered everyone inside to lay on the ground as he jumped over the teller counter and stole money from the drawers.

He also told detectives, the reason he chose to rob First Union Bank, was because it was close to I-83. Smith told police he had thrown the mask and gun out the window near I-83 following the last robbery, but officers never found either item.

Officers, while serving a search warrant on Smith's home, were able to recover $20,239 bundled together in a black bag, that was reportedly used in the third robbery. Police also found outfits Smith wore during the two other robberies. Detectives were able to connect some of the money to the bank with matching stamps and serial numbers.

Smith was found guilty of the robberies and was sentenced to 12 years in prison.

“Not shocked not surprised, I knew it from day one and I commend the Baltimore Police Department and the detective they did an incredible job,” said Jacquelyn's brother Marcel Trisvan.

He said he didn’t talk to Keith or Valeria Smith much, despite the fact that they lived so close by.

“Not much about him at all other than my sister loved him and she probably thought the world of him.”

Jacquelyn Smith’s mother Anna lives in Rhode Island where she grew up. She’s had her doubts since she heard what the Smith's said happened that day.

“It was so phony why would he stay in the area with her in the car after the man pulled the chain from her neck as he claims. It was too phony it wasn’t real,” said Anna.

Bishop Roger Tatuem of Helping Hands Ministries in Churchville helped comfort Keith and his daughter in their time of need.

"I was devastated, because there was no real indication of anything other than what he had conveyed to me and we had talked many times, and he had the same story," said Tatuem.

A story, which held up, even as Smith came to the bishop a few weeks ago to tell him his work was taking him to Florida.

Outside the Aberdeen home the Smith's shared, there are signs of a hasty departure, and the bishop says, in retrospect, something had been distancing the couple from the church in the months leading up to her murder.

"They had been absent from the church, participation here, for about seven months and so the only contact we had was telephone contact and the absence was due to some situations they were trying to get straight," said Tatuem.

It also seemed odd the same man who had shared the bogus story of his wife's violent death with the media so freely a few days after the stabbing, then refused all interviews later that same week after the story drew national attention.

"His initial conversation to me was that it was recommended to him. I don't know if it was an attorney or some official person that said he should cut his communication with the media for right now," recalled Tatuem.

The bishop says Keith Smith recently sent him a picture, a selfie of him in front of a swimming pool with palm trees, claiming he had made the move to Florida. But now he's shocked after learning Smith and his daughter were captured in Texas.

Keith and Valeria are expected to be moved back to Baltimore on March 20. Additional details about the motive and how police were able to see through the ruse will be available when they are moved.