Zander Homes closed in January leaving retirees and families struggling to get back deposits and finish work on their homes.

Zander Homes, an award-winning builder that constructed homes for families and local athletes, is accused of taking home deposits and failing to pay subcontractors.

Caitlin Hicks is one of at least nine families now dealing with the fallout of Alex Trakhtman’s, owner of Zander Homes and Trak Homes, LLC, business practices.

“We've lost about, I mean I don't want to put an exact figure, but it's multiple hundreds of thousands of dollars,” said Hicks. 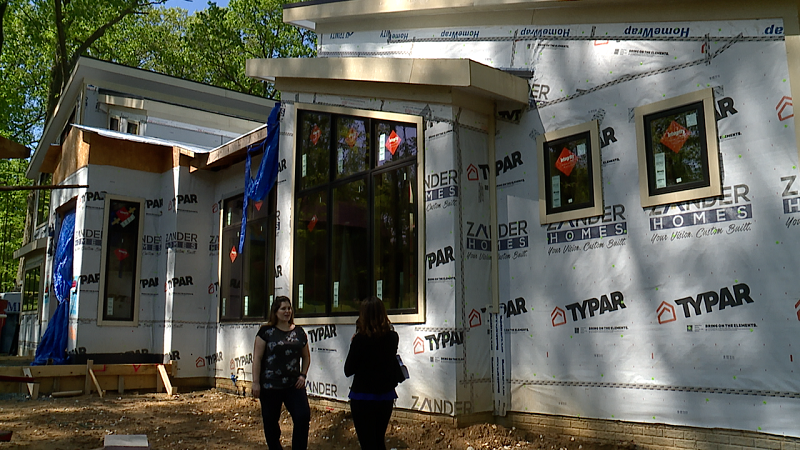 Trakhtman began work on Hicks's Lutherville-Timonium home in March of 2018. By October, she and her husband knew there was a problem.

“Things were getting very expensive. He kept giving us upcharges and what not, which were beyond our original fixed contract,” Hicks said.

In January of 2019, Trakhtman shut down his business.

In a letter to the Maryland Attorney General Office of Consumer Protection, he wrote in part:

I borrowed where I could just to keep things going, including taking on more personal debt and depleting personal savings to pay staff, subcontractors and vendors. I took out loans from various high interest vendors to keep things operating that eventually led to the inability to pay the debt … Unfortunately I was not able to convince any investor or partner to join us and I was tapped out.

Hicks, who should’ve been moving into her new home this month, will have to wait until December when her new builder completes construction.

“We're pregnant; we're due in September," said Hicks. "We thought we were going to be in our new house for our new baby and our new family, and now we're going to be living in our little condo with the baby and trying to move, and, it's just, the whole thing is just a mess.”

On top of that, she’s facing liens filed against her property by subcontractors who never received payment for their work.

“We have about six liens against us equaling about $200,000 for things that had been paid out of the bank but were never paid from Zander [Homes] to the subcontractors,” Hicks said.

Former Ravens Wide Receiver Torrey Smith took to Twitter to share that he was also a former customer of Zander Homes and was left with an unfinished home. He expressed his frustration towards "white collar" crimes and says at first he wanted his money back, but now he just wants Maryland Attorney General Brian Frosh to jail Alex Trakhtman.

"I’m one of the folks that got burned by this dude. He is just chilling with his family like everything is normal. White collar crime is lovely. @BrianFrosh hasn’t done a thing."

The privilege that comes with white collar crimes is disgusting. You can’t even call 911 and be like “Yo, this dude stole millions of dollars and committed fraud”. They will be like “We can’t do anything about it but let us point you in the right direction”.

Since then, 12 families have filed complaints against the company with the Maryland Attorney General.

Nicole and Ken Suter hired Korey Smith of Korey Homes to build their house in 2016. Right after they moved in, they received an unexpected bill.

“He slid across the table an invoice for an additional $84,000 worth of work that was bid on and completed under the terms of our agreement,” said Ken Suter. “I told him that it was bogus; he fought me on it.”

In December of 2017, Korey Homes placed a lien on the Suter’s property.

“It was devastating. This was supposed to be the house of our dreams, and it just has turned into a very stressful situation,” said Nicole Suter. 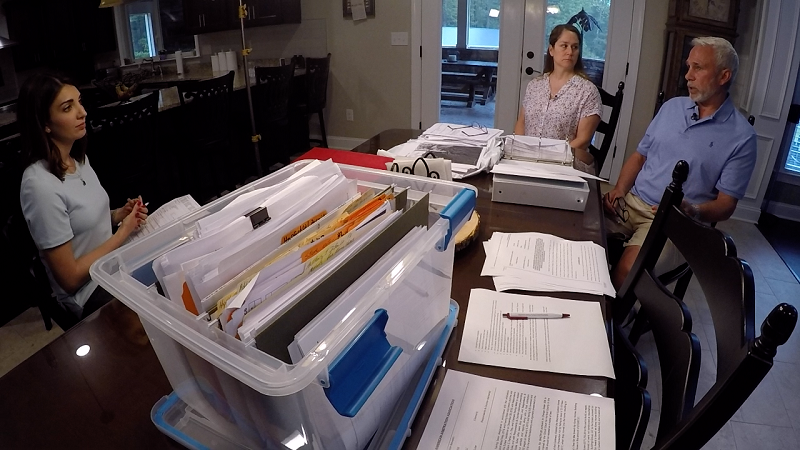 The Suters with a box of records and paperwork

Smith went out of business, sold his home, and moved out of state. The company abandoned projects still in the framing process, failed to provide home warranties, and left families battling liens from unpaid subcontractors.

The Suters may be considered the lucky ones. After having a lien on their home for more than a year, they finally went to arbitration in January of 2019 where a judge awarded them more than $500,000 to cover defects, legal fees, and other court costs.

Despite the ruling, they haven't seen a penny from Korey Homes.

“Whether we'll ever obtain the award we received through the arbitration process, I don't know,” said Ken Suter.

Consumer protections & new legislation
The Suters are hoping to get something from the Maryland Home Builder Guaranty Fund, a safety blanket of sorts that offers minimal protections.

The Fund reimburses homeowners up to $50,000, with a cap of $300,000 per builder, which doesn’t make a dent in the financial hole some clients of Zander Homes and Korey Homes now find themselves in.

Delegate Teresa Reilly (District 35B, Cecil and Harford counties) proposed a bill this past legislative session that would’ve suspended a contractor’s license if they failed to pay subcontractors.

“There is a problem between contractors, subcontractors, and homeowners that does exist, and I believe we have to get to the bottom of it so we protect all three entities,” said Reilly.

A constituent first made her aware of the problem when some Cecil County subcontractors weren’t getting paid.

“The customer's paying for the job, the employer's getting paid, but he's not paying his employees," Reilly said. "Any other situation, that doesn't happen.” 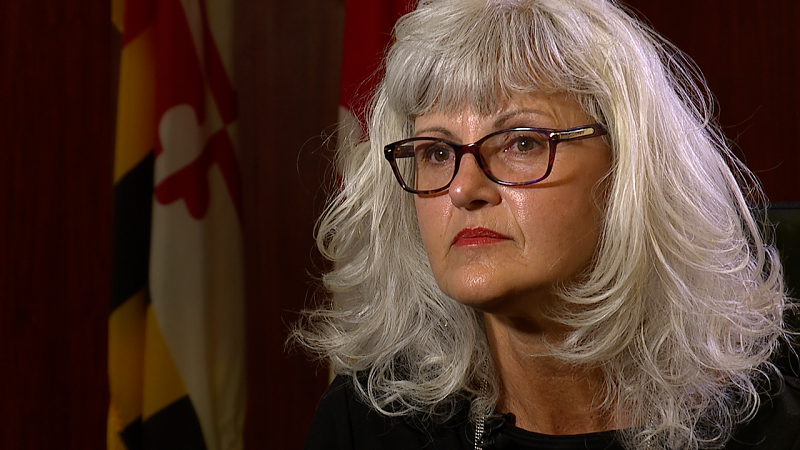 Reilly’s bill was defeated because of the potential impacts it could have on other projects. Looking back, she agrees the bill could’ve been drafted better, but she’s not letting go of the issue.

“What the answer is yet, I do not know, but I certainly hope from today's date until we get back into session next year that we can come up with some kind of solution,” said Reilly.

New legislation could better protect future families, but for the Hicks and Suters, they’ve run out of options.

“Three years later, it's not finished, it's not settled, we're not relaxed,” said Nicole Suter.

“This is our dream home, and, unfortunately, it's become a bit of a nightmare,” Hicks said.

While some money from the Fund is better than nothing, these families will have to wait. The reimbursement process can take up to two years.

The Harford County Sheriff's Office has been investigating Korey Homes for the last six months and says it's still ongoing.

Korey Smith’s attorney sent the below statement in response to our request for comment.

Korey Homes Building Group faced significant financial stress, and had accrued debts that it was unable to pay. In September, Korey Homes engaged a bankruptcy attorney to advise the company and develop a plan to restructure its liabilities outside of bankruptcy court because it did not appear that the company could afford the substantial costs that would be incurred in attempting to reorganize in bankruptcy. There was nothing nefarious whatsoever about the prompt cessation of business; it was dictated by financial realities. Korey Homes was a family owned and operated business. Korey Homes’ management and dedicated employees took great pride in the fine custom homes it built for so many families over the years, and deeply regret that the company was unable to continue to serve its valued customers and regrets that it could not fulfill its contractual obligations to its customers. Korey Smith and his family were also devastated by the closing of the business, and feel greatly for those that were affected. Eighteen years of blood, sweat and tears went into the business. Korey Smith lost everything and his family has suffered greatly as well, having to start over. They borrowed against their house to try to keep the business operating, and ended up selling their home to repay the bank, which still left some of the debt unpaid. Everyone has suffered in this unfortunate situation.

Resources for consumers working with custom home builders
Thinking of buying a custom-built home? Be sure to read the Maryland Home Buyer Booklet and hired a licensed builder.
Click here to view the Home Buyer Booklet
Check for Registered Home Builders

If you have a Matter for Mallory, she wants to hear from you. Email her using the form below.