WMAR-2 News Mallory Sofastaii first reported on these incidents in October. Dozens of claimants have since reported similar fraudulent activity.

“A thousand dollars was taken out of my account,” said Donna Hooper.

“On or about November 6 or 7, my debit card was hacked,” said Vincent Trakney.

Glenn Cooper realized $1,000 had been stolen from his account when he was buying groceries and his debit card was declined.

Matt Kelley was also surprised to see several withdrawals from his account when his Bank of America unemployment insurance debit card had been in his possession the entire time.

“Three withdrawals for $900 taken out across various ATMs in Maryland,” said Kelley.

Bank of America knows fraud is an issue, however, claimants aren’t being provided with the same protections as regular bank customers.

Maryland unemployment insurance claimants are sent swipe cards, while other bank customers are issued cards with a chip, an “added layer of security,” according to Bank of America’s website.

In addition to losing these crucial benefits, claimants accounts are frozen. It often takes weeks for new cards to be issued, and in many cases, claims filed to recoup the stolen funds are denied by Bank of America. 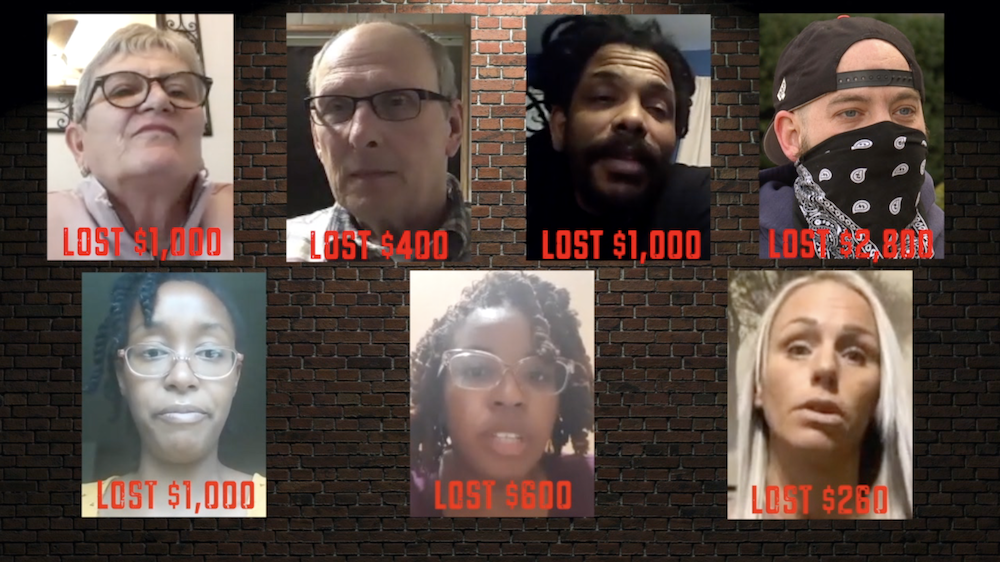 “How could you dismiss that when someone is on unemployment and needs to be financially sound as they possibly can?” asked Hooper.

A bank spokesperson told Sofastaii it’s harder to identify fraud with claimants cards because there isn’t an established spending and banking history like there is with other bank customers.

“The investigation was actually closed the day after I initiated the claim, so they’re not even investigating,” said Trakney.

“I can’t get a straight answer from anybody let alone get my money back, which we need,” Kelley said.

Bank of America has said they’ve been in discussions with Maryland about options for card technology. However, there's no guarantee a chip would protect against this current fraud pattern.

“That’s the thing about a chip is it’s really hard to recreate. With a magnetic stripe, it’s just so easy to replicate. I mean, if I can capture one swipe almost any place, I could recreate your card physically. The difficult part is I have to get your pin,” Sieglein said.

In an interview on December 11, Sofastaii asked Maryland Secretary of Labor Tiffany Robinson about the security vulnerability.

“Can you explain why UI debit cards don’t have chip technology?,” asked Sofastaii.
“That would be a question for Bank of America, our partner,” said Robinson.

Bank of America did not respond to Sofastaii’s request for an interview.

In an email, a spokesperson wrote:

“We continually work to prevent fraud and use a number of tools to achieve that goal. We do not publicly disclose those efforts.”

“It’s likely they’ve done the math and they’ve said if we issue chip cards to all these people, it’s very expensive. Chip cards are not cheap. And I’m issuing a card where we’re going to load $600 a month for a couple of months or $300 a month for a couple of months, and they might not even be a customer of our bank they’re just doing this for this, so it’s not worth our efforts to do that. It sounds callous, but it is just business, right?” said Sieglein.

In the absence of chip cards, Sieglein said there are other things the bank can do.

“If Bank of America or any issuing bank turns up their fraud protection, they would’ve caught this. Gheez, why is an ATM withdrawal in Florida happening on a card that was issued to a Maryland resident?,” said Sieglein.

Claimants feel like the bank is choosing its bottom line over protecting the money they need to pay their rent and feed their families.

“It does feel like hey, me and my family were the victim of something here and you guys are further victimizing us. And on top of not giving us back the $2,800, you’ve now frozen my accounts so I can’t get any of my other unemployment payments,” Kelley said.

“I feel like I’ve been treated like a criminal for somebody that did something to me,” said Trakney.

A spokesperson with Bank of America said if a fraud victim’s claim is denied, to ask the bank to reconsider.

“In instances where we deny a claim, we encourage people who disagree with our decision to ask for reconsideration. We take any new information or further identity verification from the account holder, and if it addresses our concerns we will credit the customer’s account.”

Sieglein added that direct deposit could potentially cut down on some of this fraud, however, Maryland is one of only three states that doesn't offer direct deposit without issuing a debit card first. In a news conference last week, lawmakers said they’re working to ensure that people can receive their unemployment benefits through direct deposit and or a paper check.