Emails show DAT was aware of the miscalculation as early as 2016 when Louis Wilen, a retired programmer and Montgomery resident, discovered other property tax credits were being subtracted before calculating the Homeowners' Property Tax Credit, and he notified the department.

The department disagreed with Wilen. DAT’s justification for calculating credits in this way was a 2011 tax court decision against a senior who represented herself.

Wilen refused to let it go. He reported the miscalculation to the Office of Legislative Audits (OLA), but didn’t receive a response. He brought it to his state delegate, and in 2017, Delegate Al Carr (D-Montgomery County) introduced legislation correcting the state’s formula.

“But the bill died in committee and that was the end of it in 2017,” said Wilen.

He went to his County Council, but nothing came of it, then at the beginning of this year, Wilen reported it once again to the OLA.

This month, the agency released their findings.

“A scathing audit came out that found all these problems at the DAT including the problem that I had reported,” Wilen said.

Wilen is relieved that he was finally heard and that auditors agreed with his assessment, but more importantly, he said it’s about what’s just and fair.

Instead of relief, as advertised, the audit shows recipients awarded the credit plus other credits were worse off.

READ MORE: Renters, homeowners running out of time to apply for "forgotten credits"

“Here we have the people who are the worst off financially and they’re getting these credits taken from them and they don’t even know it,” Wilen exclaimed. 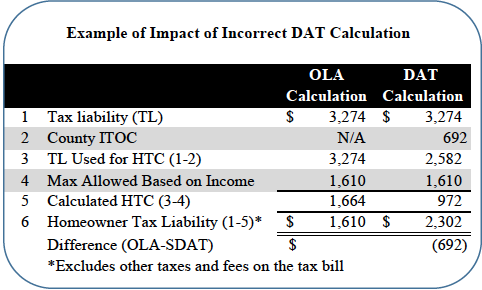 In its response to the auditor’s findings, DAT stated that beginning with the 2020 application, it will change procedures so that only the Homestead Property Tax Credit is considered a deduction, but not any other real property credits.

RELATED: The tax credit nearly half a million Marylanders are missing out on

However, the department does not feel as though prior year calculations were inaccurate, and therefore doesn’t plan on issuing any additional payments for prior year tax credits.

“The state, the government, I hope does not just get to say, “Oops, we made a mistake but too bad we get to keep the money,’” said Wilen.

Delegate Carr intends to reintroduce legislation aimed at rectifying the error. It would require the state to go back three years, recalculate the credits using the new method, and issue refunds to anyone overtaxed.

“It’s become more clear that that’s the way they should’ve been calculating it all along and so, I’m happy the auditors have confirmed that and SDAT is voluntarily calculating it that way going forward,” Carr told WMAR-2 News Mallory Sofastaii.

“Going forward? But you brought this up four years ago. Four tax cycles have passed, so those were low-income families who could’ve kept an additional hundred dollars or more,” Sofastaii said.

“Yes, and if the situation were reversed, if you or I or anyone out there and we made a mistake on our taxes, the state would surely ask us to pay, so it’s the right thing to do for the state to go back retroactively and make those people whole,” Carr responded.

DAT declined an in-person interview. A spokesperson sent Sofastaii the statement below:

Our administration is always looking for ways to provide relief for constituents. In 2018, we initiated a review of the methodology that was used by previous administrations. We determined that a policy change to eliminate the deduction of these tax credits would potentially increase some tax credits for homeowners in the future. In 2019, we requested and received a legal opinion that justified and supported the change, which has now been implemented for the 2020 tax credit application.

When Sofastaii asked if the department will return any money for previous years, the spokesperson wrote “this change applies going forward.”

Even though the state is now calculating the credits correctly, DAT said they will not use the 2020 methodology for seniors over 70 who are able to retroactively file for the HTC going back three years.

When Sofastaii asked why SDAT wouldn’t apply the 2020 method if the applications are filed in 2020, a spokesperson wrote:

The department's updated methodology for the Homeowners Tax Credit became effective in 2020. Any 2020 tax credit application, which was made available in February, will not have local credits deducted. The only credit presently deducted is the Homestead Tax Credit, which is required to be deducted by law. Applications submitted for prior years will remain under the methodology practiced for the applicable years. It would be inconsistent to use two different calculation methods for prior years, depending only on when the homeowners submitted the application.

If you believe you may have been impacted by this miscalculation, Mallory wants to hear from you. You can email her at Mallory@wmar.com, or find her on Facebook and Twitter.