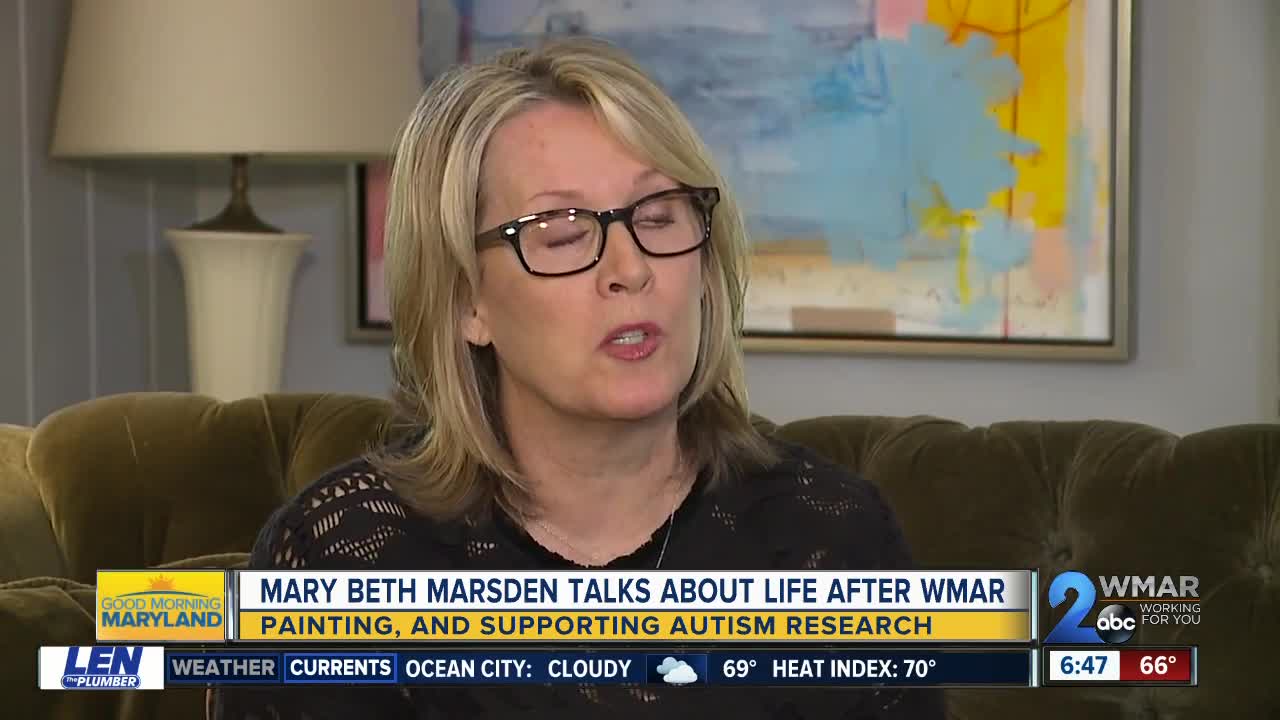 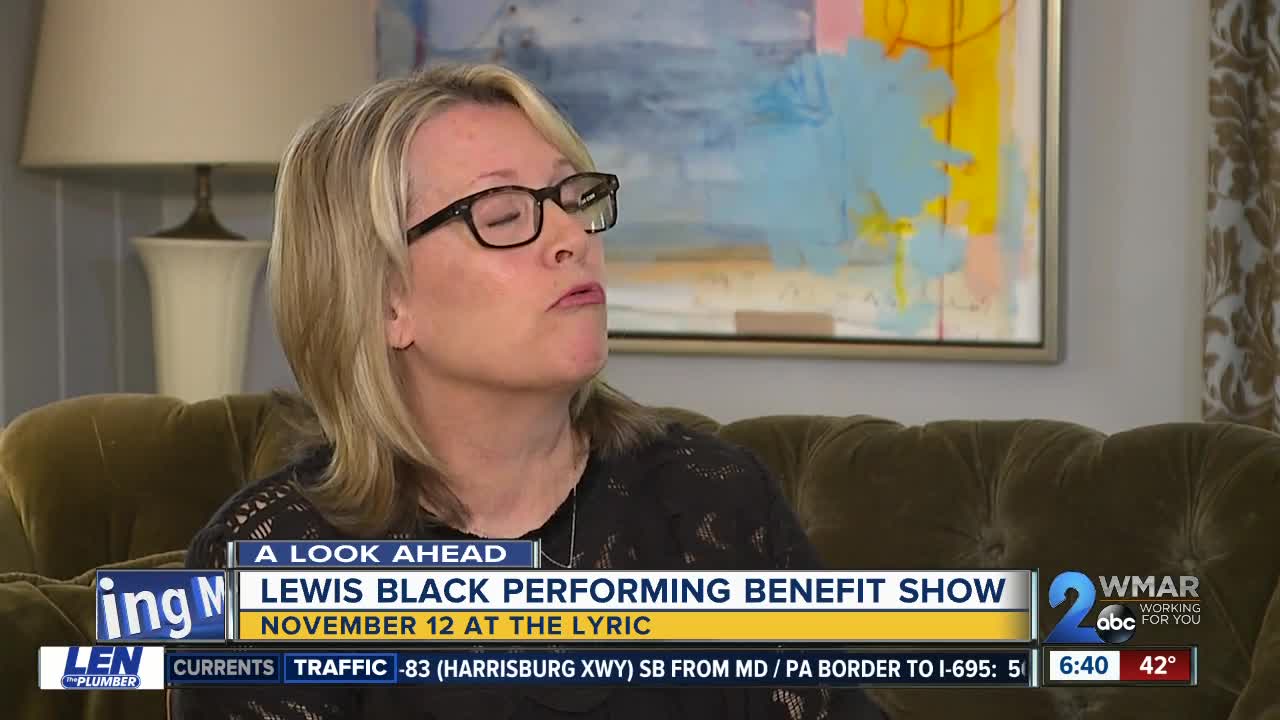 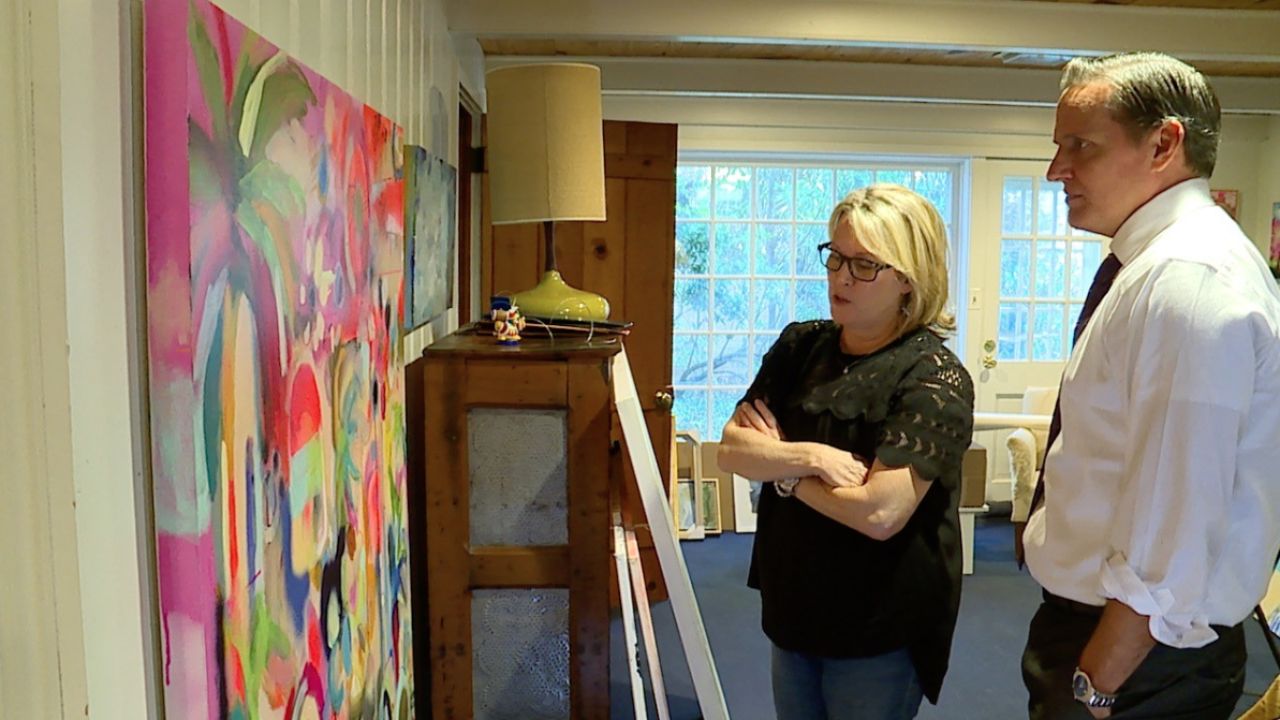 BALTIMORE (WMAR) — It's been almost 10 years since Mary Beth Marsden left Maryland's first television station. Since her departure, Mary Beth has been busy — doing some radio, painting, and taking care of her three children, including a daughter diagnosed on the autism spectrum.

There's a world-famous comedian coming to Baltimore in a couple weeks, doing a show to benefit a local organization that helps families deal with autism. So, we decided it would be a good time to sit down with Mary Beth Marsden. But it turns out, she's rarely sitting anyplace for very long.

After 21 years at WMAR, Mary Beth Marsden signed off, for good on December 2nd of 2009.

“Ten years, I can't believe it's been that long,” she said, in an interview with WMAR-2 News’ Christian Schaffer. “I have filled my days with three kids, who have now grown into almost young adults.”

Three kids, and painting. Lots of painting, which she had not done in decades..

“That is truly my meditation, my zen, my therapy,” she said. “It really brings me a lot of joy, and it's something I picked up again after TV.”

Marsden has converted a small room in the basement of her home in Baltimore County into a studio.

“I come down, and then I grab a bottle of wine in my wine cellar drink up the wine and then I start painting,” she said.

She does not have an easel; she often works on the floor- so some paintings are stippled with paw prints.

“The animals will step on my art sometimes,” she said. “I just don't care. It's allowed.”

And she doesn’t use a palette; paper plates are just fine.

“You should see me here when I'm really in the zone. I'll have paint on my clothes, paint in my hair,” she said.

But the results are stunning. Works by Mary Beth Marsden are now displayed in a local gallery, and in the homes and businesses of buyers.

“I want people to feel happy when they look at my paintings,” she said. “Life is too difficult, so I don't really go dark and moody.”

Having that studio at home, saves time, which gives Marsden more time for her husband and three children.
The youngest, her daughter, was diagnosed as being on the autism spectrum when she was three years old.

“By the time she was in second grade, at a typical school, in a typical classroom with support, it really wasn't enough. And that was really the year that I left Channel 2 so that we could kind of figure out what we should do for her and what would be best for her,” she said.

While she says it can be difficult to raise a child with autism, it has gotten easier over the years, thanks in part to organizations like Pathfinders for Autism” which was started by former Baltimore Oriole BJ Surhoff and his wife, after their son was diagnosed.

“At the time they had nowhere to turn,” Marsden said. “And so they decided to start this organization as a resource group to help other parents just like them find their own path.”

It’s a path to support families with a child on the autism spectrum, but Pathfinders also tries to educate the wider public, about autism.

And it’s getting even bigger One in 50 children in Maryland is diagnosed with autism.

“You have children, you never know what God's going to give you exactly. And it's your job to love them and raise them the best way you can and support them and support their needs, and some kids have special needs.” She said.

Marsden says since signing off, from WMAR one last time, she’s found her focus in that basement studio, and in finding something for children with autism to do as adults; a purpose for all those children, that has be supported by their families and their community.

“Individuals with autism, as soon as you know a little something about it, they're wonderful!,” she said. “They’re funny, they add something to the community and they can be great in various workplaces. It’s just a matter of finding the right place for them.”

Marsden said she does not have any plans to work in local TV news as of right now. Her daughter is now 17 years old, attending a local public high school, with what she describes as terrific support.

There is a fundraiser coming up, to benefit Pathfinders for Autism. It's the Lewis Black comedy show, that's set for November 12th at The Lyric.

Tickets are still available. Lewis Black is not taking a fee for the show; all proceeds will go to Pathfinders for Autism and the Maryland chapter of the Cystic Fibrosis Foundation.