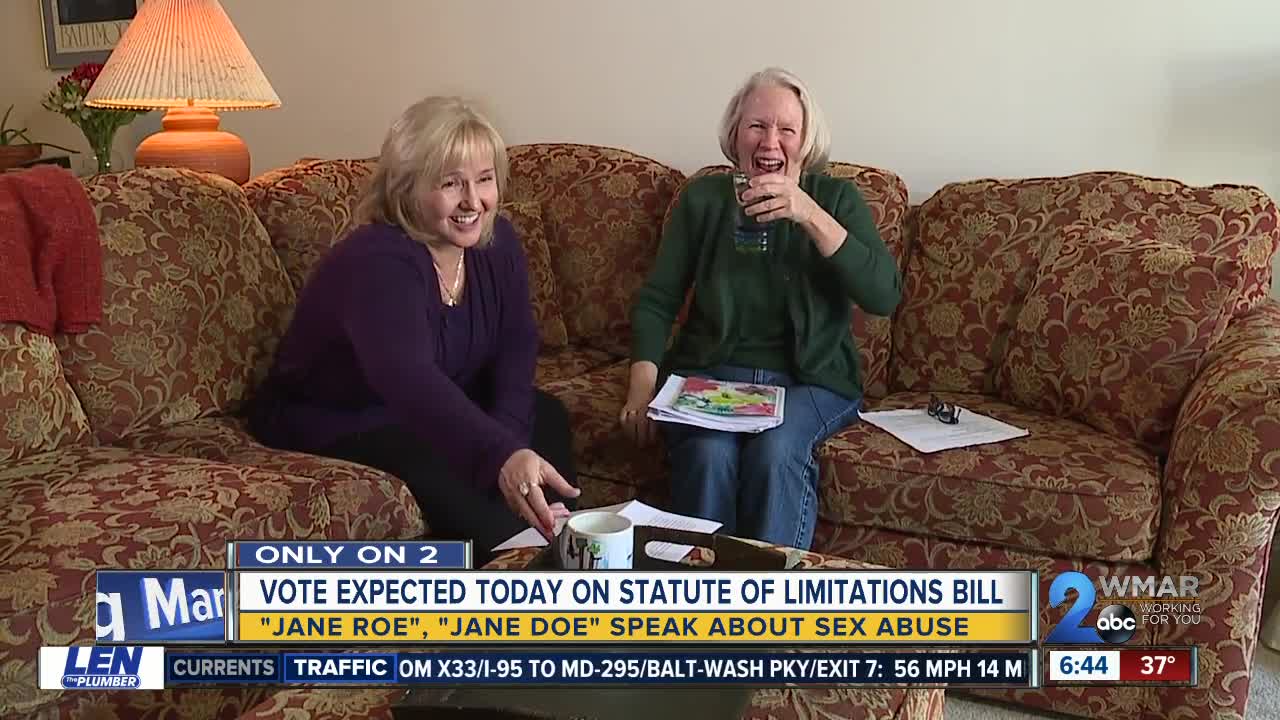 In an exclusive interview with WMAR-2 News, Jean Hargadon Wehner and Teresa Lancaster support bill that would allow survivors to sue their abusers at any age. 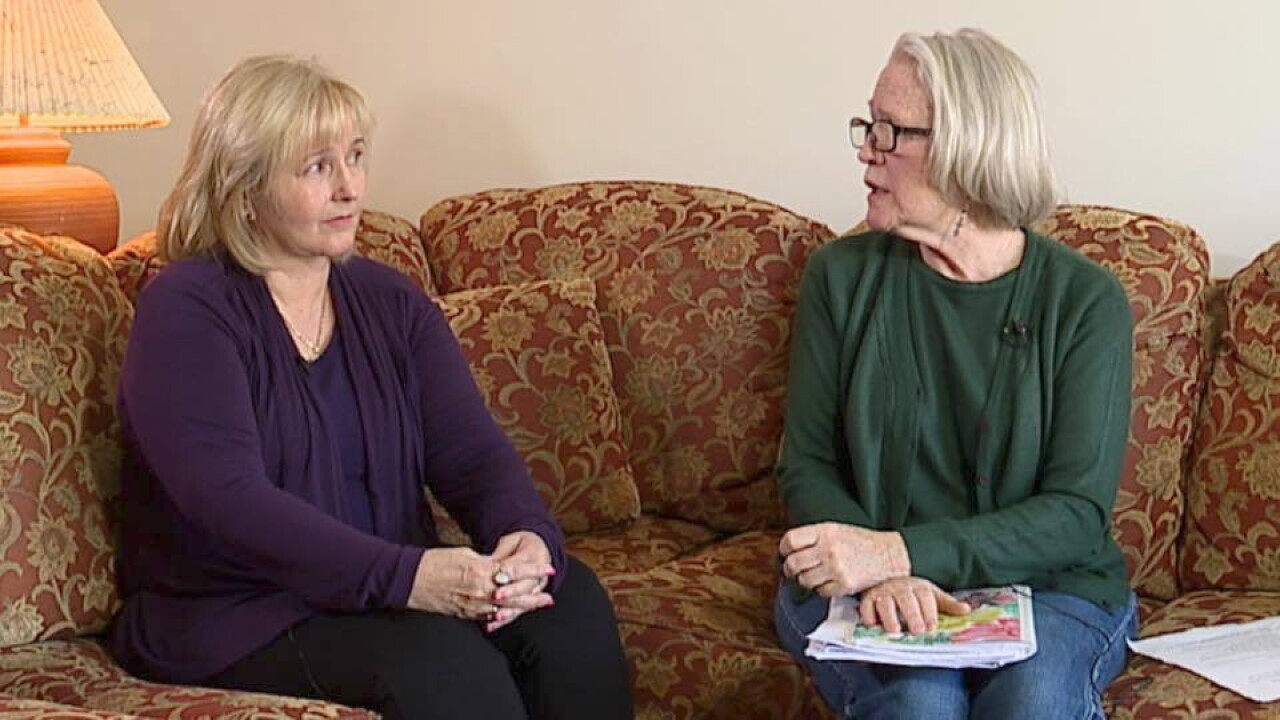 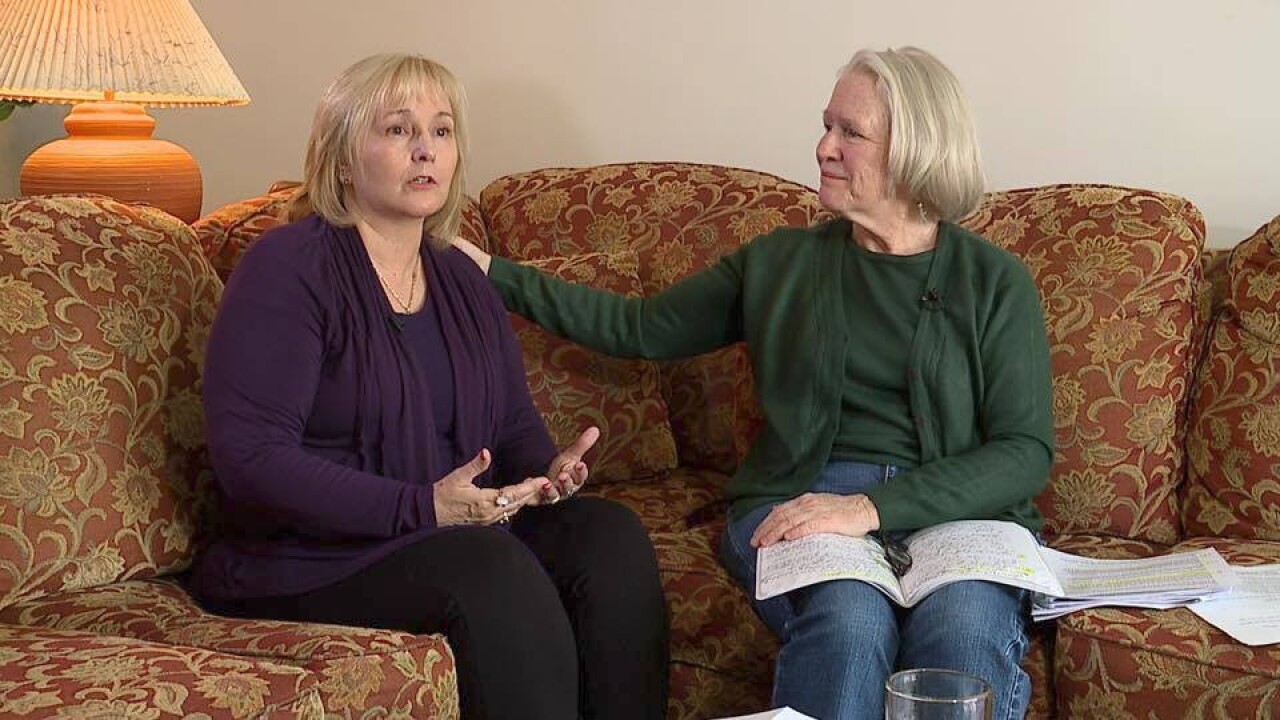 BALTIMORE — On Monday there is a vote scheduled in the House of Delegates on a bill that would allow victims of child sexual abuse to sue their abusers, regardless of how long ago the abuse happened.

The sexual abuse of several teenage girls, decades ago at Archbishop Keough High School in Southwest Baltimore, formed the basis of the Netflix series “The Keepers.”

For years, two of those women – now in their 60s - have been fighting the same battle, separately.

When WMAR-2 News’ Christian Schaffer and photojournalist Bill Fink sat down with Jean Hargadon Wehner and Teresa Lancaster – known as “Jane Doe” and “Jane Roe” when they sued the Archdiocese of Baltimore back in the 1990s – they started talking, to each other.

Their conversation lasted nearly eight minutes; they talked about their abuse at Archbishop Keough High School, the murder of Sister Catherine Cesnik and how they’ve coped in the decades since then – before Christian ever asked a question.

Below is the raw video of their interaction. (Warning, explicit content)

“Your case made me feel like I wasn't completely insane and imagining for all those years,” Lancaster said to Hargadon Wehner.

It all came out. Years of being kept separate, on purpose, so that memories from one, would not contaminate the memories of the other.

In fact they didn’t stop talking - back and forth - for almost eight minutes. Both of them have known other victims of sexual abuse who have experienced drug and alcohol abuse, depression and even suicide.

“That we're even functioning and sane is amazing,” Hargadon Wehner said.

“I know,” Lancaster replied. “I often think of that. That I'm even alive.”

“I kind of feel a little guilty about that, to tell you the truth," Hargadon Wehner said.

They did meet during a brief interview shown in "The Keepers" and at an event for the group "Survivors Network of those Abused by Priests.” But they've never really had a chance to talk to each other.

READ MORE: Director of "The Keepers" talks with WMAR-2 News

You would think they would have met back in the early 1990s, when they both sued the Archdiocese of Baltimore. But their attorneys at the time made sure no meeting ever happened.

“I didn’t even know what Jean looked like,” Lancaster said. “I knew nothing about her.”

“And I would ask Beverly Wallace (one of their attorneys) about it and she said, you have to be sequestered from each other I mean you’re going to sit and talk because it will give them more ammunition, like what did you tell Jean about Father Maskell doing this this and this and they would say we made up the stories,” Lancaster said.

Jean Hargadon Wehner was the first to come forward, after she started remembering, in 1992, what had happened to her at Archbishop Keough High School more than 20 years earlier. In “The Keepers” she described, in graphic detail, the abuse by that school’s counselor, Father Joseph Maskell. She also says she was abused by other men that Maskell knew, including other clergy and police officers.

“I had begun remembering in '92 as if I had just left that school,” Hargadon Wehner said. “And all I know is what I was remembering, and living through it for the first time."

Her attorneys designated Hargadon Wehner as "Jane Doe." They wanted to prove her story, so they started looking for more victims.

In the pre-Facebook days, that meant placing an ad in the Baltimore Sun, looking for Keough alumnae who might have had memories of sexual impropriety. They also mailed the ad directly to graduates – including Teresa Lancaster. She called the lawyers' office not from home, but from a phone booth.

“I would not use my home phone because I figured they would trace the number and somebody would come and shoot me. Because I was scared to death. It was very intimidating,” she said.

After telling the attorneys her story of abuse by Father Maskell, Lancaster joined the lawsuit, as "Jane Roe."

Her story was also featured prominently in The Keepers. In 1995 they both testified before a judge in Baltimore City Circuit Court.

Before one of them would enter any room in the courthouse, the other would have to leave. The plan was for Jane Roe's story and Jane Doe's story to corroborate each other, in court, in an attempt to prove the Archdiocese of Baltimore knew about the abuse and did nothing to stop it.

“This person (Lancaster) was saying horrendous things in a whole different way, by the same person (Maskell) that I had told them,” said Hargadon Wehner. “So as much as they wanted to act as if there was nothing to corroborate it, they knew. I was her witness and she was mine."

Still, in the end, the judge ruled that the statute of limitations for claims of sexual abuse had expired. The lawsuit was over.

Now, Hargadon Wehner and Lancaster are speaking out, in an attempt to end the statute of limitations for cases of child sex abuse in Maryland.

Lancaster went to Annapolis last month, to testify in favor of House Bill 687, which would do just that. After a recent change in Maryland law, survivors have until they are 38 years old to file a lawsuit. Lancaster and Hargadon Wehner say that doesn’t go far enough.

“They don't understand this crime if they believe you can put a statute of limitations on it,” Hargadon Wehner said.

When they started speaking out, they thought no one would believe them. Now, after The Keepers, they hope that by working together they might be able to stop what happened to them from happening to anyone else.

“I feel very close to Jean, even though I haven’t been with her hardly at all because we share so much misery,” Lancaster said. “And I understand - and I can say I understand - because I’m dealing with it too. And it’s hard. It does infiltrate every day of your life. Every single day since I was 16, that man has had an effect. The name comes up. The abuse comes up but it’s always in my head.”

Monday is the so-called "crossover day" for the 2019 General Assembly session. So to stand a reasonable chance of passing this year, any bill needs to get through either the State Senate or the House of Delegates before the end of the day Monday.

The vote on House Bill 687, which would end the statute of limitations on child sex abuse has been scheduled for Monday, after passing in the House of Delegates in a preliminary vote on Saturday.

Officially, the Archdiocese of Baltimore has not taken a position on the bill

Teresa Lancaster and Jean Hargadon Wehner are also once again calling on the Archdiocese to release any record it has on Father Joseph Maskell, who died back in 2001.

And they're hoping Maryland's attorney general is performing a large-scale investigation into sexual abuse by priests, like the one that came out in Pennsylvania last year.