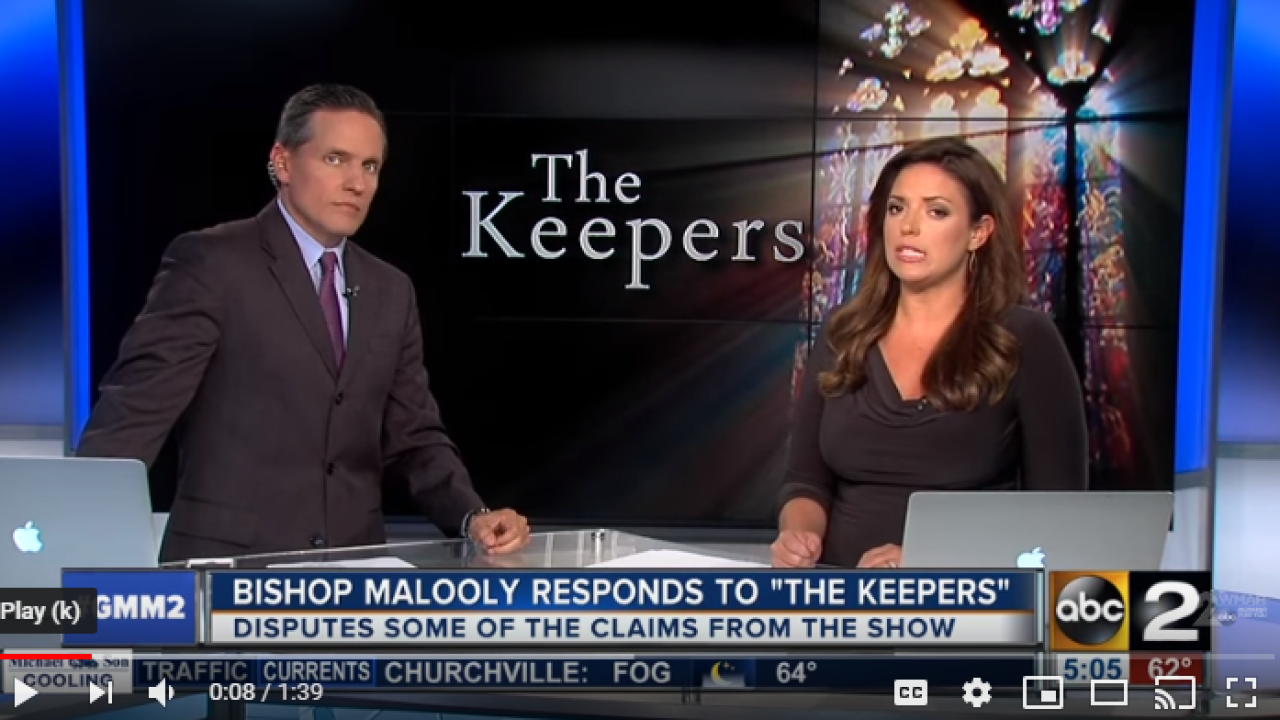 The Netflix series "The Keepers" suggests thatBishop Malooly might have participated in a cover-up related to Father A. Joseph Maskell's alleged abuse of his students in the 1960s. Bishop Malooly worked various roes with the Baltimore Archdiocese beginning in 1984, until his appointment as the Ninth Bishop of Wilmington in 2008.

Bishop Malooly released a statement Monday, claiming he wanted to clarify the insinuations made in "The Keepers."

He said he was not aware of the accusations of sexual abuse until 1992 while he was serving as Chancellor and Vicar General. When additional allegations came forth in 1994, Maskell was permanently removed.

Bishop Malooly confirmed that he did meet with Dr. Charles Franz at his Catonsville dental office, as depicted in "The Keepers." However, the bishop says "at no time did I offer Dr. Franz a boat." He continues his statement, "Charles Franz states that his mother made some kind of a report about Maskell to unidentified Archdiocesan authorities in 1967. I am not aware of any such report. I was a college student in 1967. As far as I know, there is no record of any report by Mrs. Franz in Archdiocesan files."

Here is the full statement released by Bishop Malooly:

“In the spirit of truth, I would like to make some clarifications regarding some of the claims and insinuations that were made in ‘The Keepers.’ My intention is to set the record straight, and in no way do I wish to minimize the pain and suffering caused by the abuse perpetrated by Joseph Maskell, or any other priest.

In 1992, while serving as Chancellor and Vicar General for the Archdiocese of Baltimore, I was first made aware of the accusations of sexual abuse of minors by Joseph Maskell. At that time, the adult survivor and her attorney were urged to report the abuse to civil authorities, and the survivor was offered counseling assistance. Maskell was removed from ministry and referred for evaluation and treatment with full disclosure to the facility as to the reason for the treatment. Maskell denied the allegation, and after months of evaluation and treatment, he was returned to ministry in 1993 after the Archdiocese was unable to corroborate the allegation following its extensive investigation.

When additional allegations were made in 1994, Maskell was permanently removed from ministry on July 31, 1994. The Archdiocese of Baltimore publicly stated that it wanted to speak with individuals who had information regarding Maskell. A detective was hired to search for anyone who may have been abused by him. In 1994, a music director at a Catholic church told the Archdiocese that Dr. Charles Franz may have information regarding Maskell, and so we reached out to him and set up a meeting for October 20, 1994.

The meeting occurred at the Catonsville dental office of Dr. Franz, with Dr. Charles and Mrs. Denise Franz, Fr. Richard Woy, Director of Clergy Personnel for the Archdiocese, and myself in attendance. There were no canon or civil lawyers present. I explained to Dr. Franz that Archbishop Keeler would have attended the meeting to express his apology and to reach-out personally, had he not been in Rome at the time. I explained the policy of the Archdiocese to offer counseling and spiritual assistance as needed. I also encouraged them to report the information to the State’s Attorney. At no time did I offer Dr. Franz a boat.

Charles Franz states that his mother made some kind of a report about Maskell to unidentified Archdiocesan authorities in 1967.  I am not aware of any such report.  I was a college student in 1967.  As far as I know, there is no record of any report by Mrs. Franz in Archdiocesan files.

The crime of sexual abuse of a child or young person is inexcusable, especially when it is committed by a member of the clergy – the very person who should be looking out for the spiritual well-being of all persons – particularly the young. The survivors of clergy sexual abuse should be commended for speaking out. It is because of their bravery that the truth of these heinous crimes has come to light. We as a Church must continue our best efforts to help survivors deal with the painful after-effects of sexual abuse.”