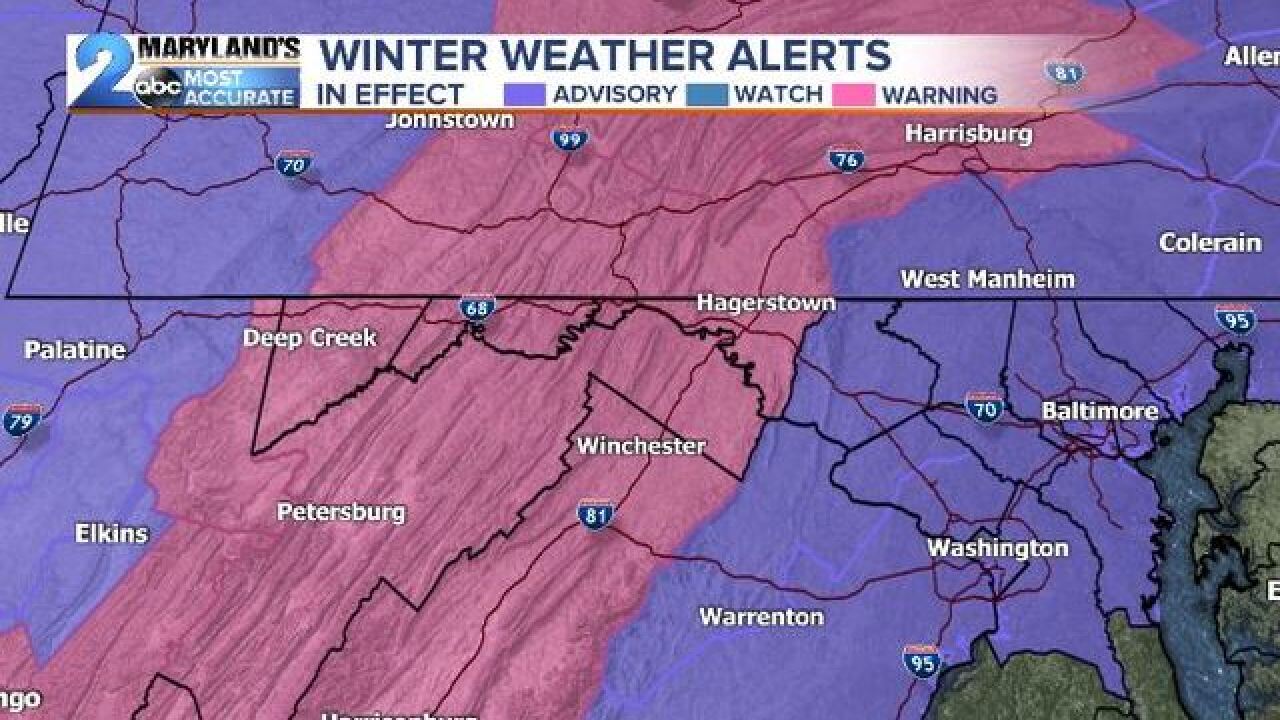 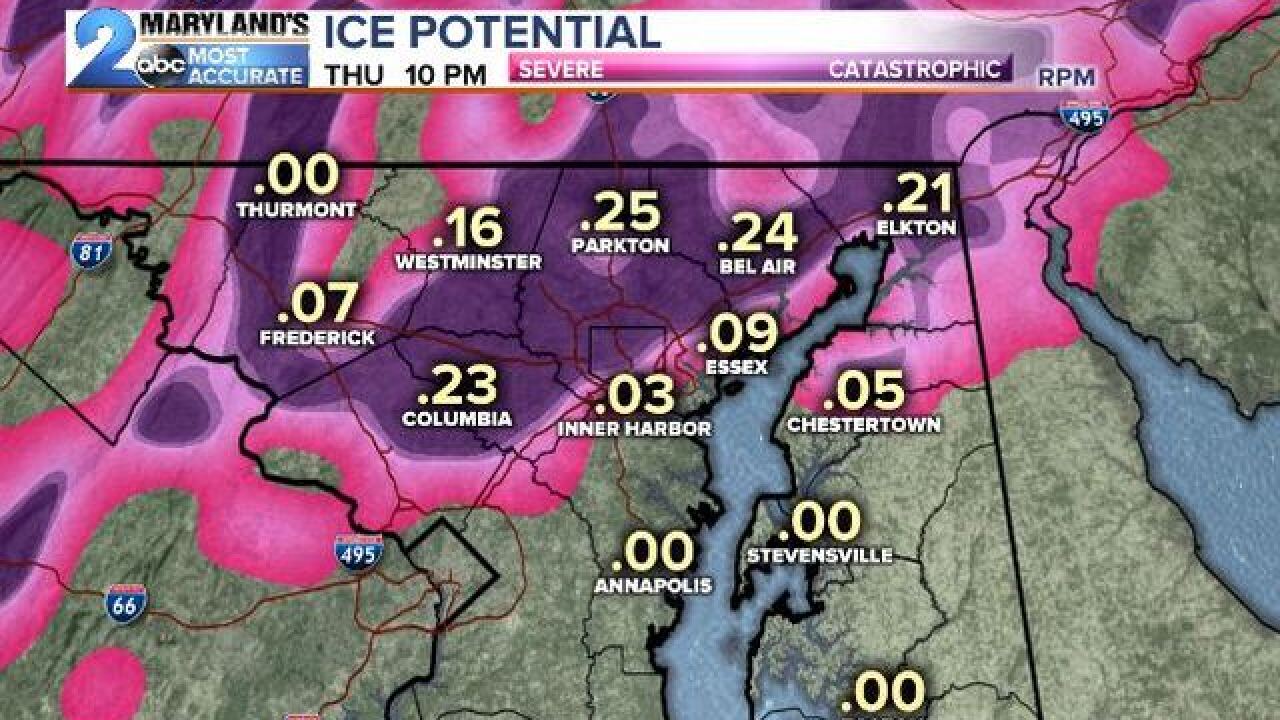 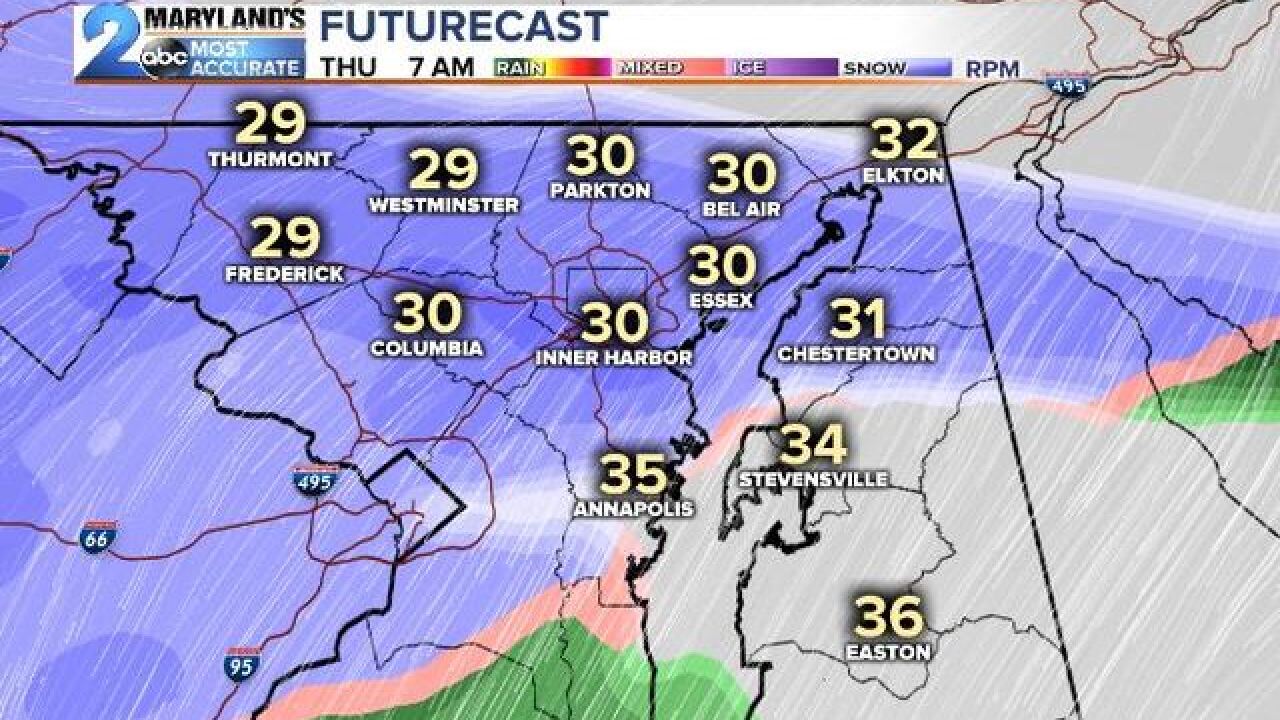 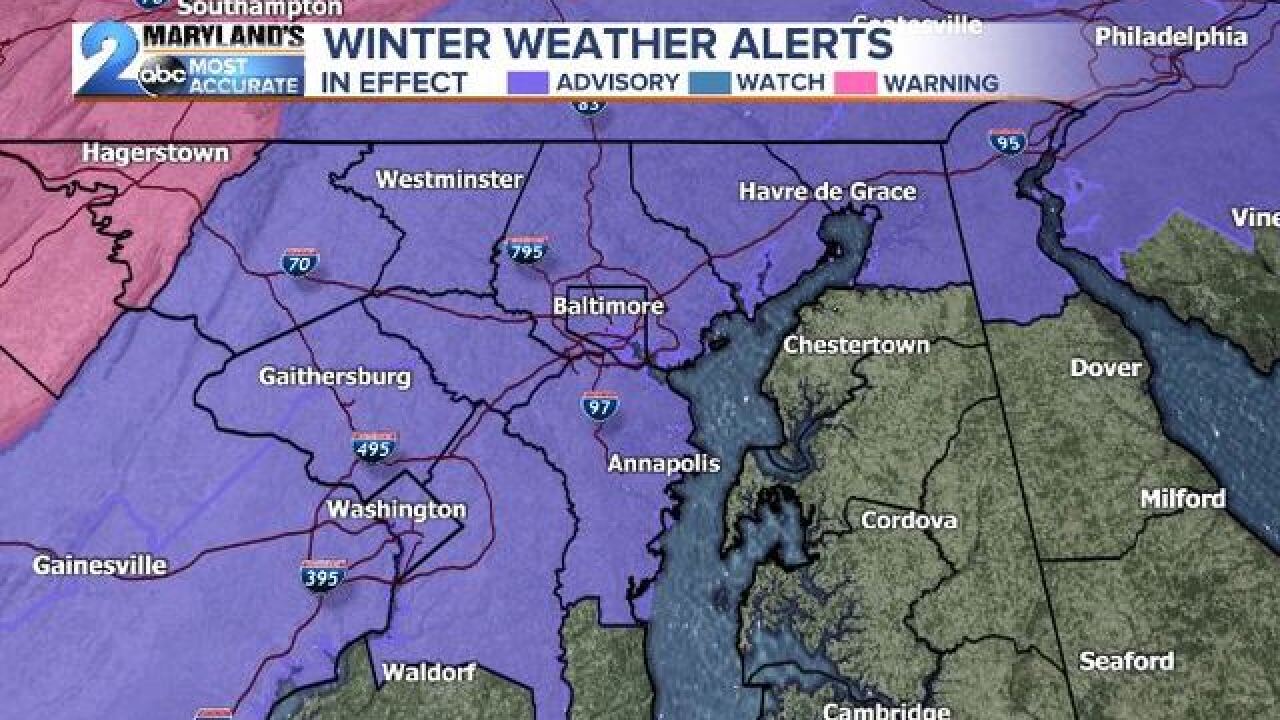 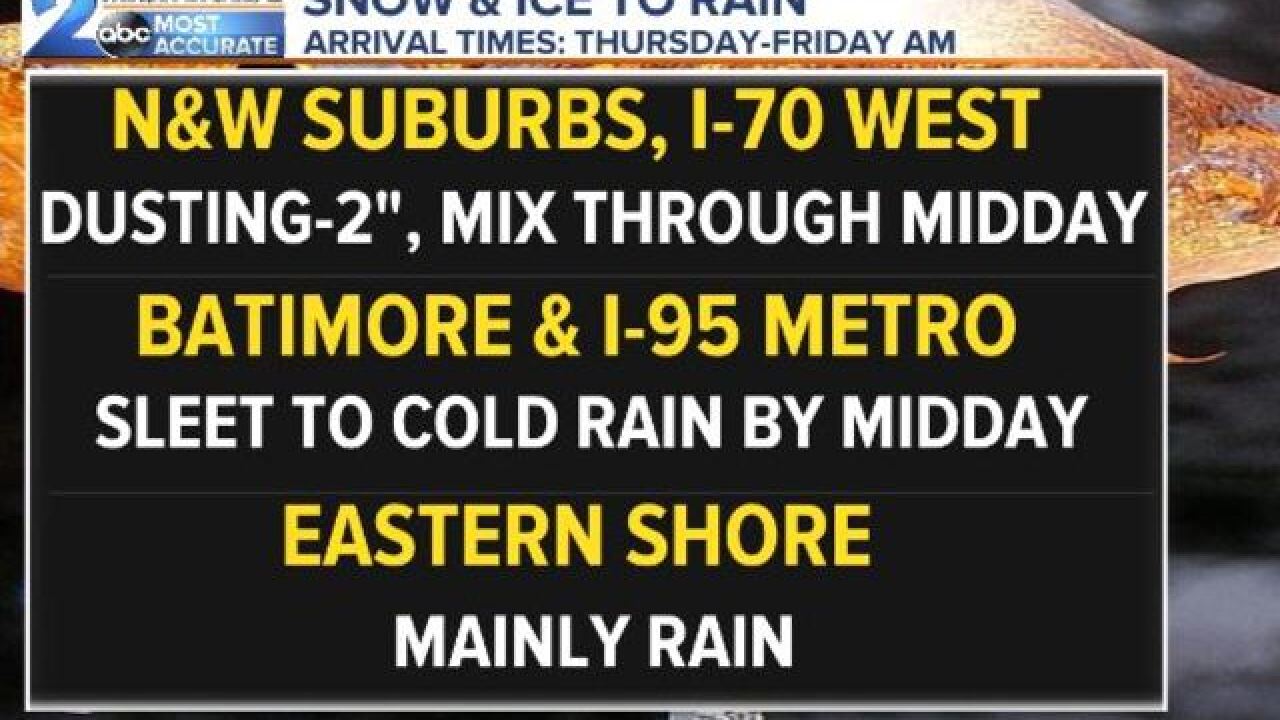 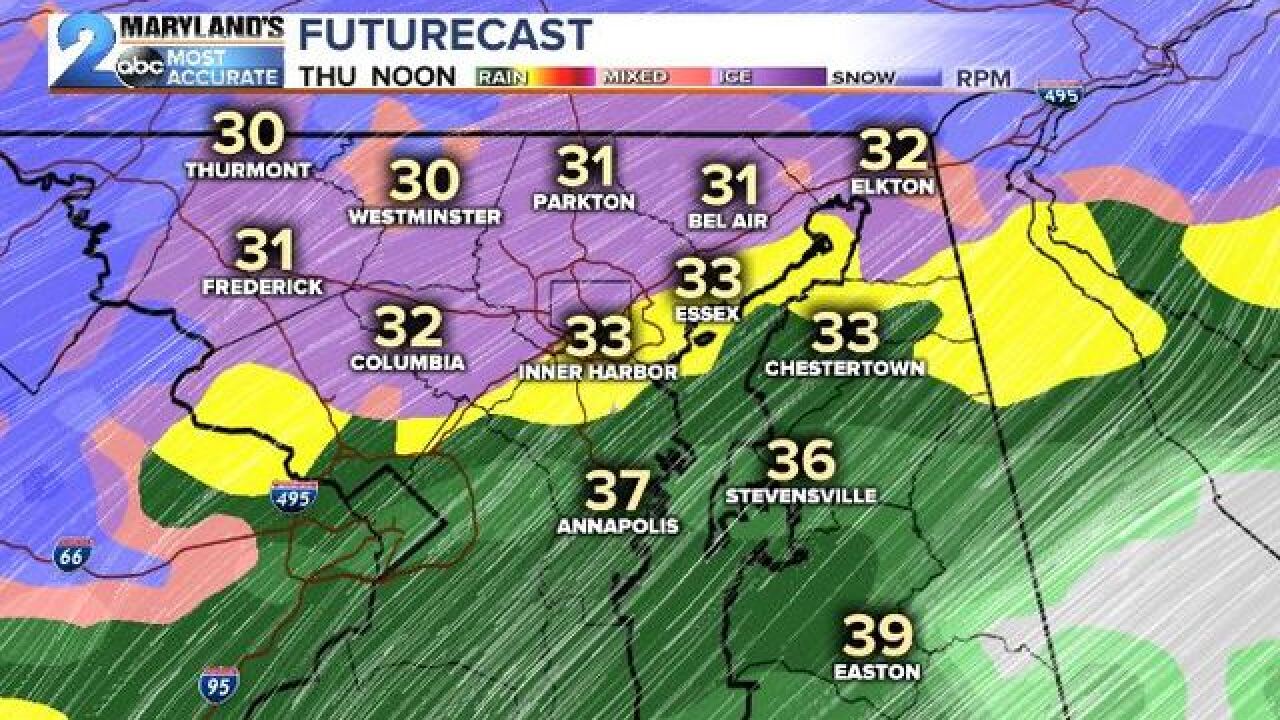 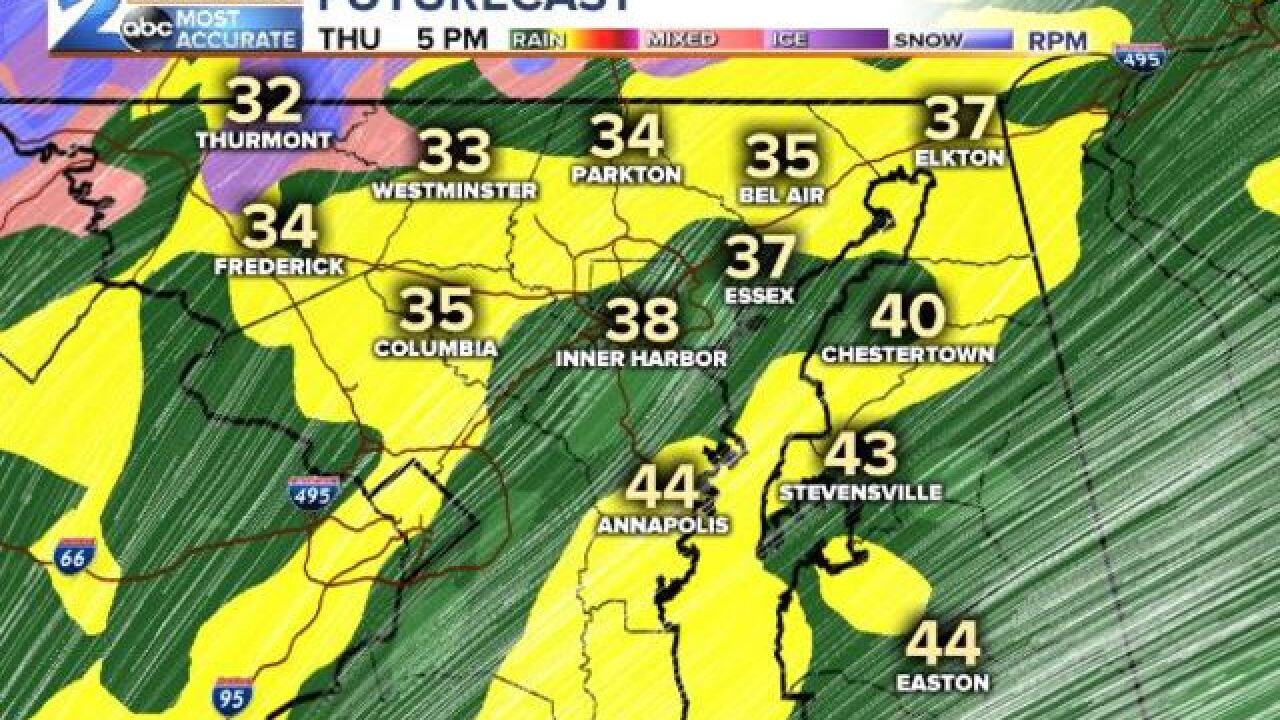 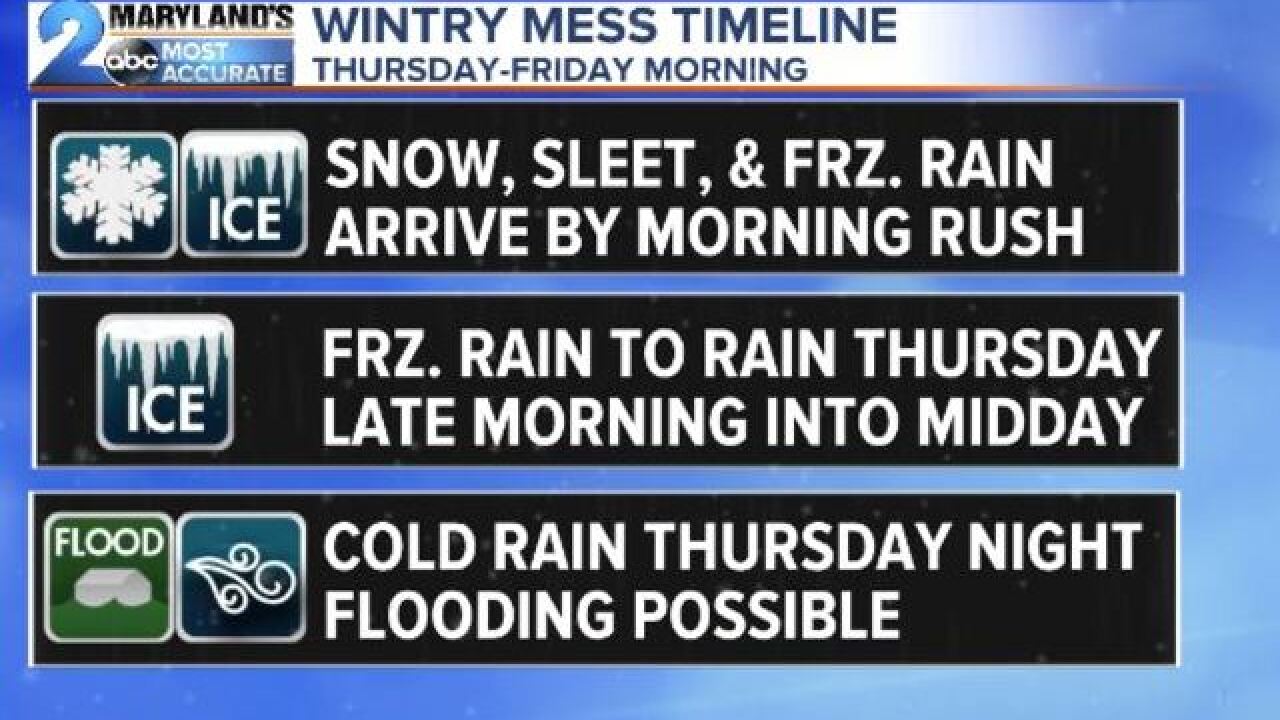 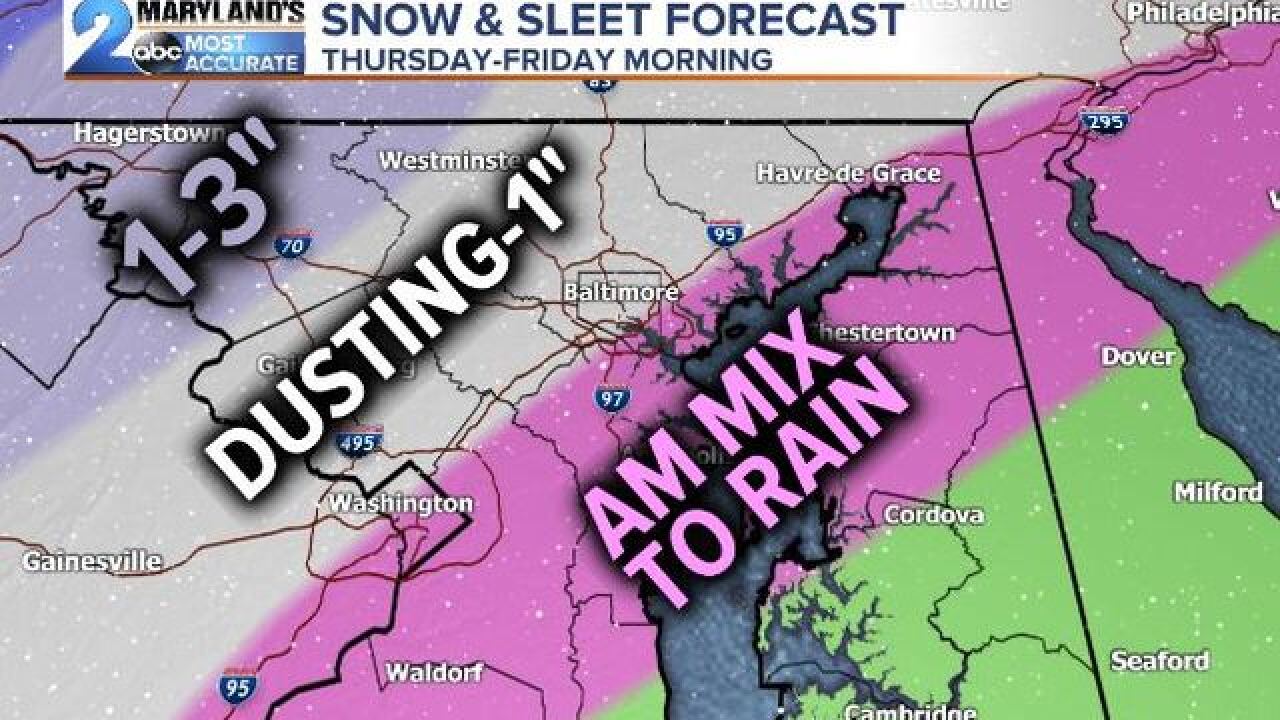 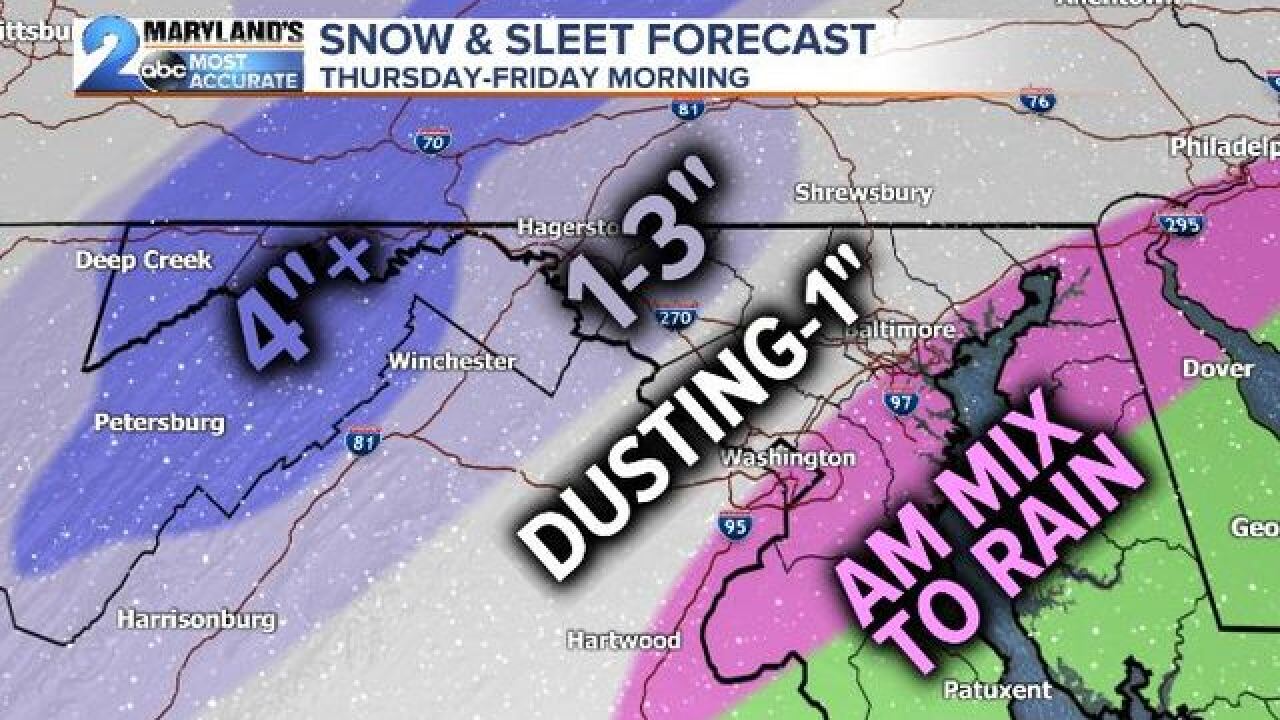 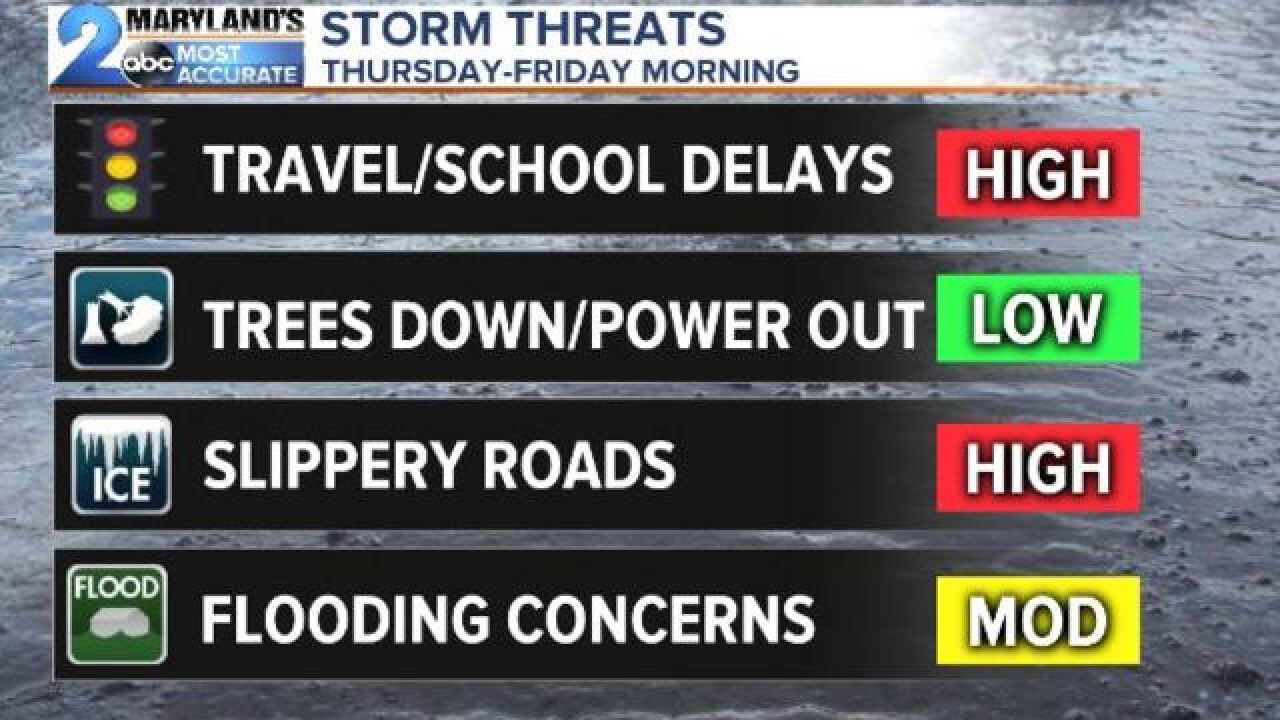 A wintry mess is set to move into Central Maryland by the morning rush Thursday morning and looks to continue into Friday morning. This storm system will bring a variety of precipitation troubles from snow to rain and even some significant icing concerns across western portions of the state.

Winter Weather Advisories are in place for every county across our area with the exception of Queen Anne's and Kent counties through early Thursday afternoon for the potential of slick travel due to ice. Winter Storm Warnings are in effect from Thursday morning into Friday morning for significant icing concerns across our mountain counties of Allegany, Garrett, and Washington. Ice accumulation upward of 0.25"+ is expected along with 4"+ of snowfall. Travel disruptions and power outages are likely.

Snow begins around 7am with an icy mix just to the south and west by the early morning rush. By lunchtime, warm air aloft will start to transition the ice over to mainly rain. Icing concerns though will remain across Washington, Allegany, Frederick, Carroll,  & northern Baltimore counties through the early afternoon (after 1pm) as temperatures float around 32 degrees even with the warm air takeover. A glaze of ice is likely in these counties mentioned above while the rest of the area sees wet roads during the afternoon hours.

The mountains of Western Maryland along I-68 from Cumberland to Oakland will keep the snow/ice around for most of the day. Dangerous travel concerns are likely through the afternoon. By late Wednesday evening, we anticipate most of the precipitation exiting the area as gusty winds out of the northwest bring in colder and drier air to begin the new workweek.

Here is where the word "complex" plays into the forecast. With a variety of precipitation from rain to ice and even snow mixing together it becomes hard to nail down totals. Our best guess suggest that much of the area will see a quick coating of snow before its washes away. Our northern counties such as Frederick, Carroll, northern Baltimore, Washington, and northern Harford could receive a dusting to 2" before the changeover. Roads could be slick to start as the ground temperatures sit just around freezing after our recent cold snap. Ground temperatures though turn in our favor by late afternoon as the warmer air wins out.

The big difference would be in Western Maryland, where the snow/ice will be falling most of the day. In particularly the higher hilltops above 1000 ft across Garrett/Allegany Counties could see totals of 2-5" through Thursday evening.

In the Baltimore metro area and Eastern Shore this is a rain event with a light glaze of ice remaining north/west of the I-95 corridor.
Overall, models are still trying to figure out total precipitation totals. It appears that we could see anywhere from .50-.2", but could see higher totals. This is something to pay attention to as higher totals could result in a more problematic weather scenario.
**Remember to keep tabs on the forecast anytime on our free WMAR2News mobile app available at the Apple/GooglePlay Store. The latest updates on this changing situation will be available there as well as on our Facebook and Twitter pages.**