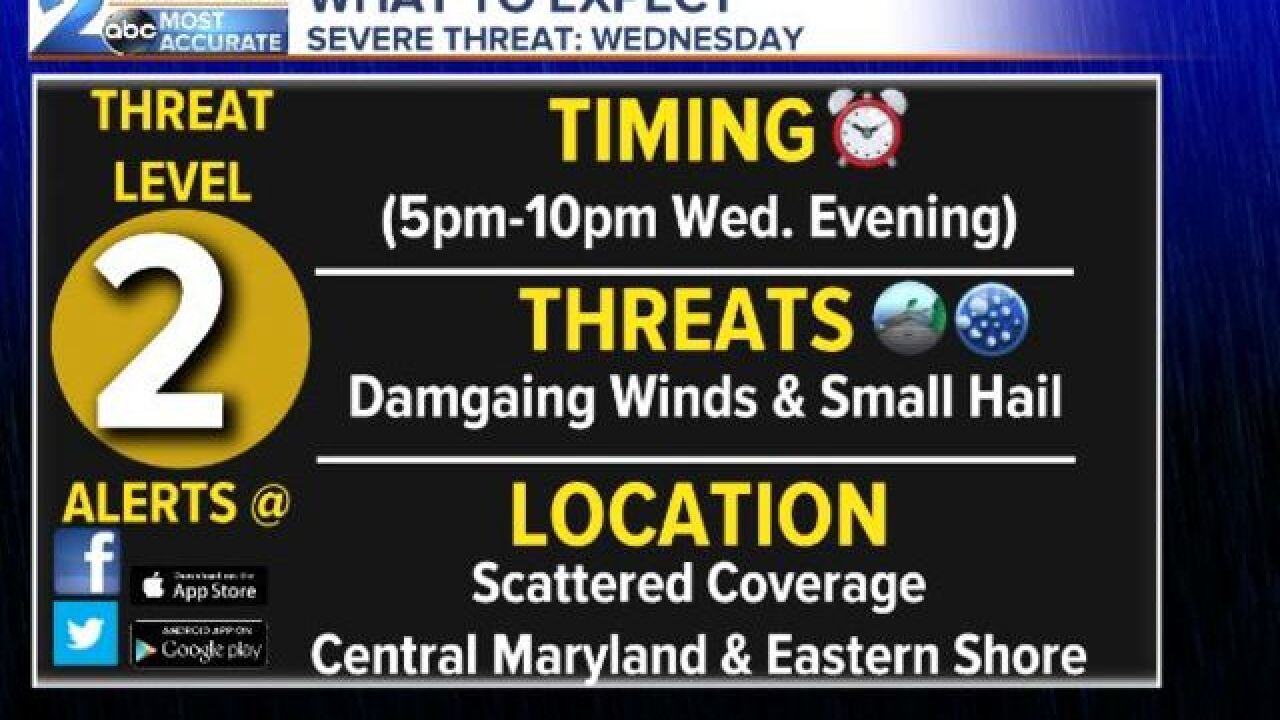 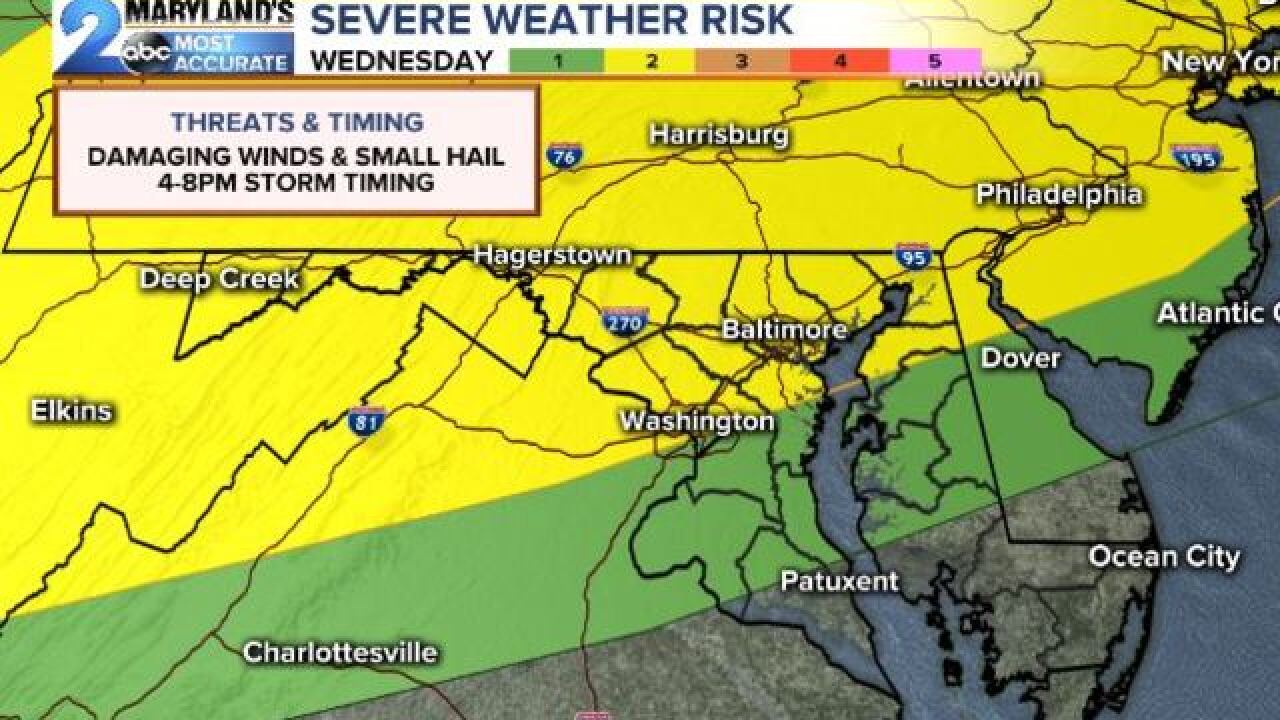 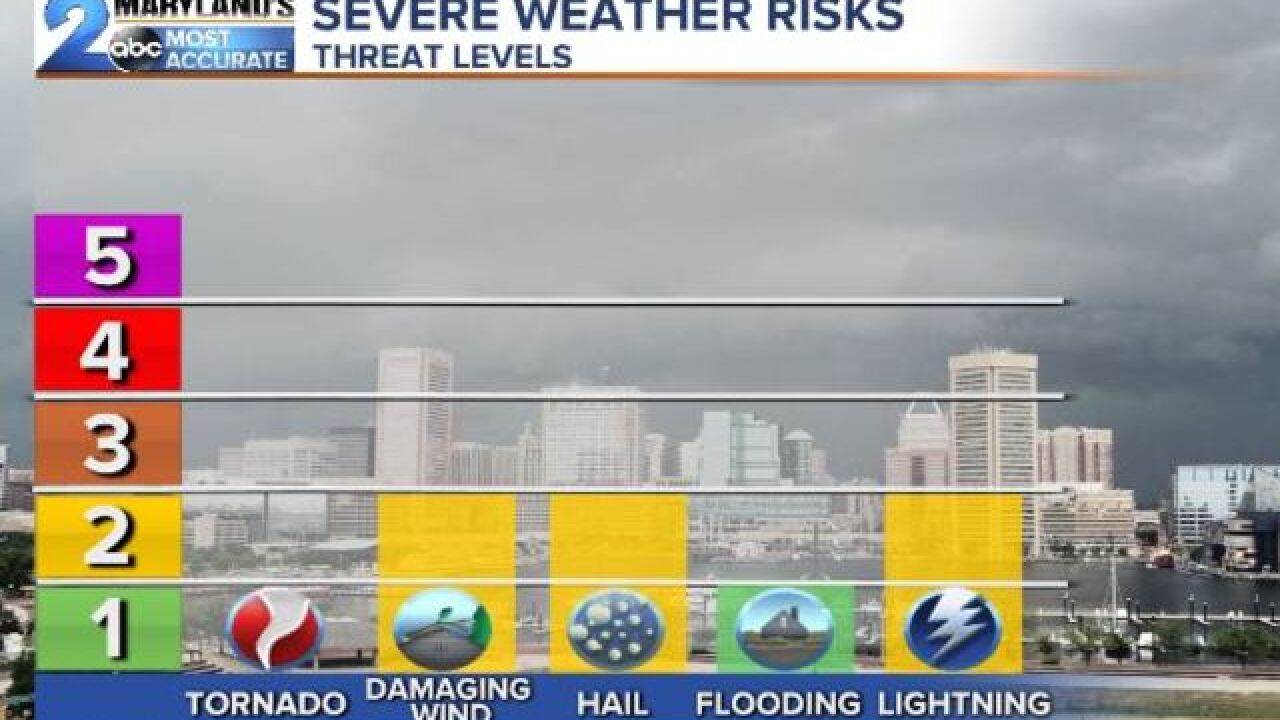 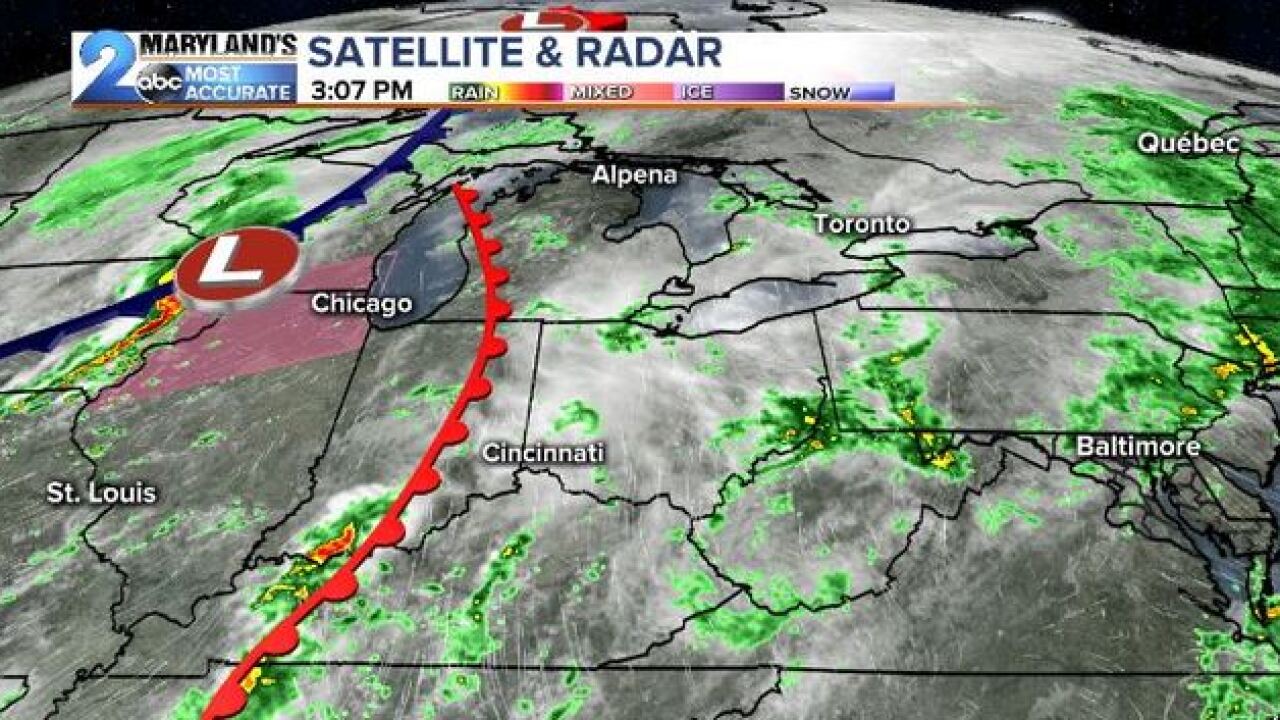 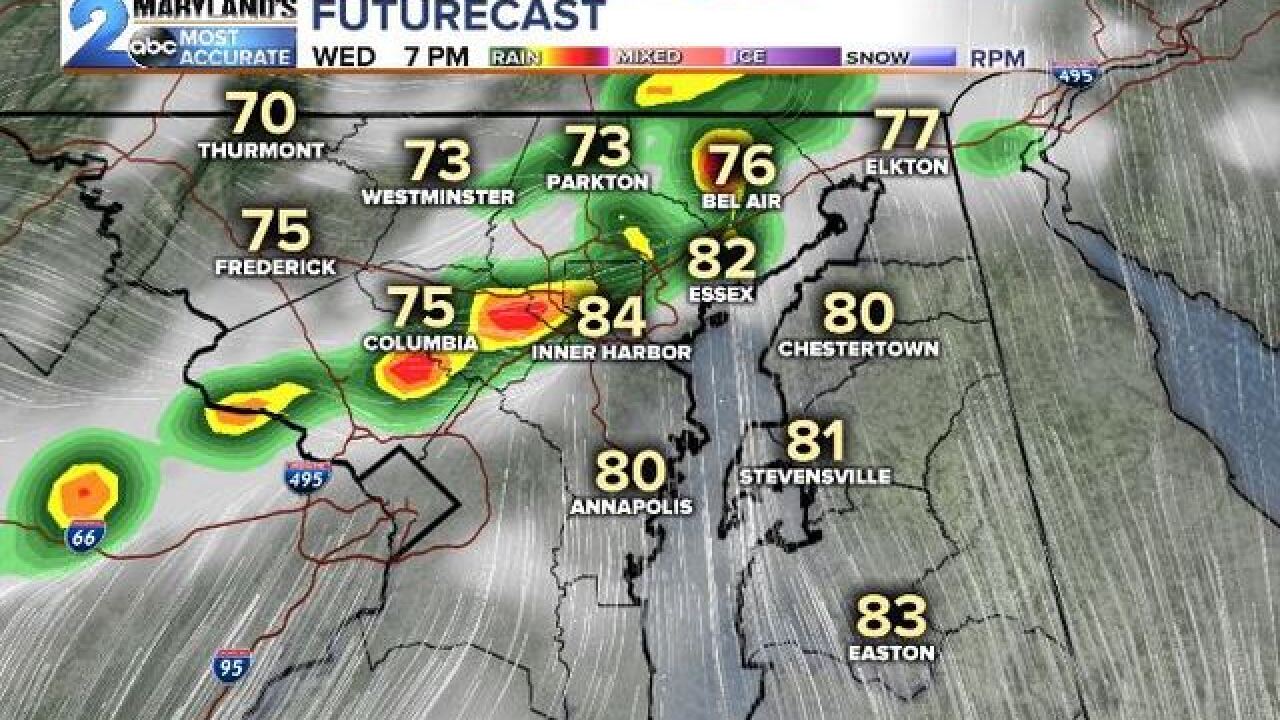 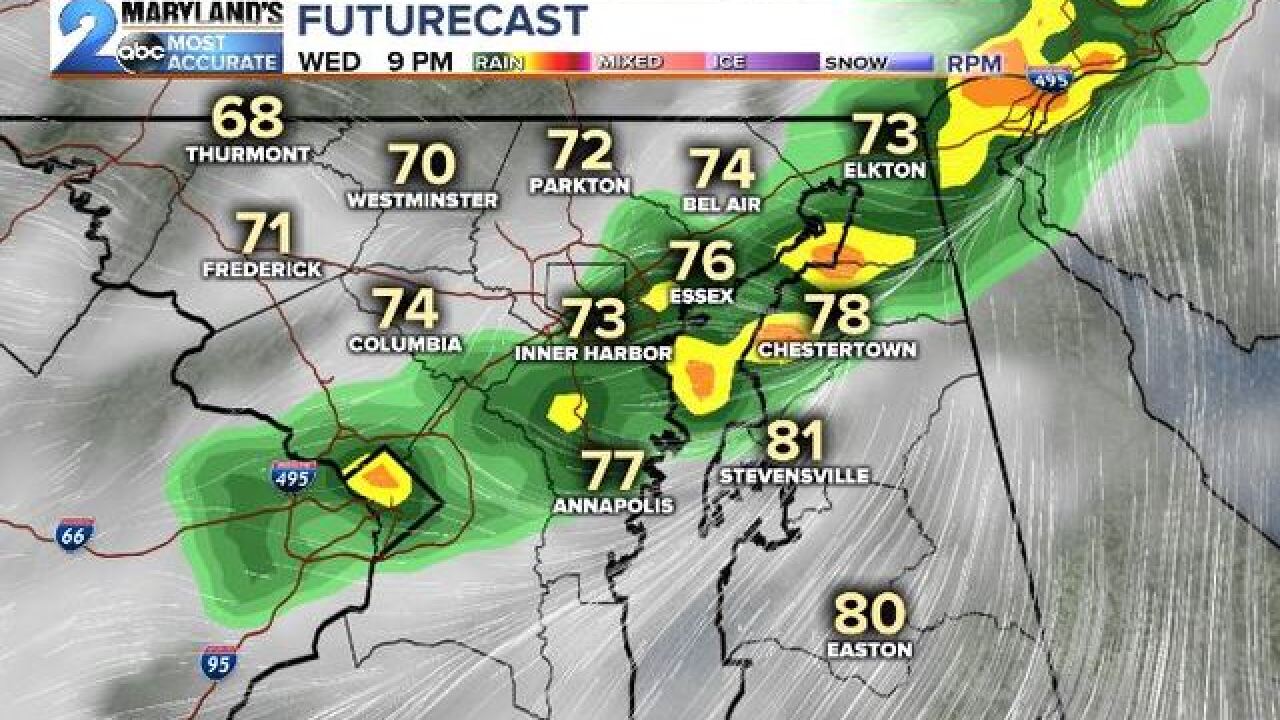 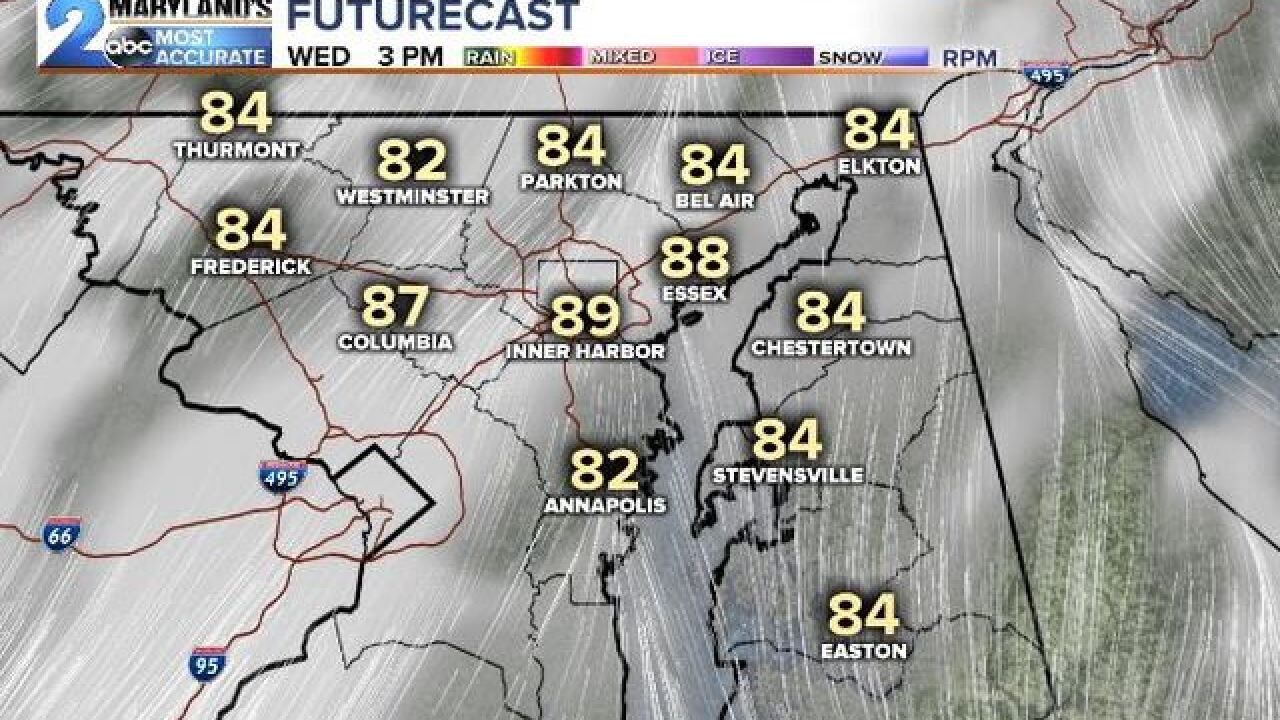 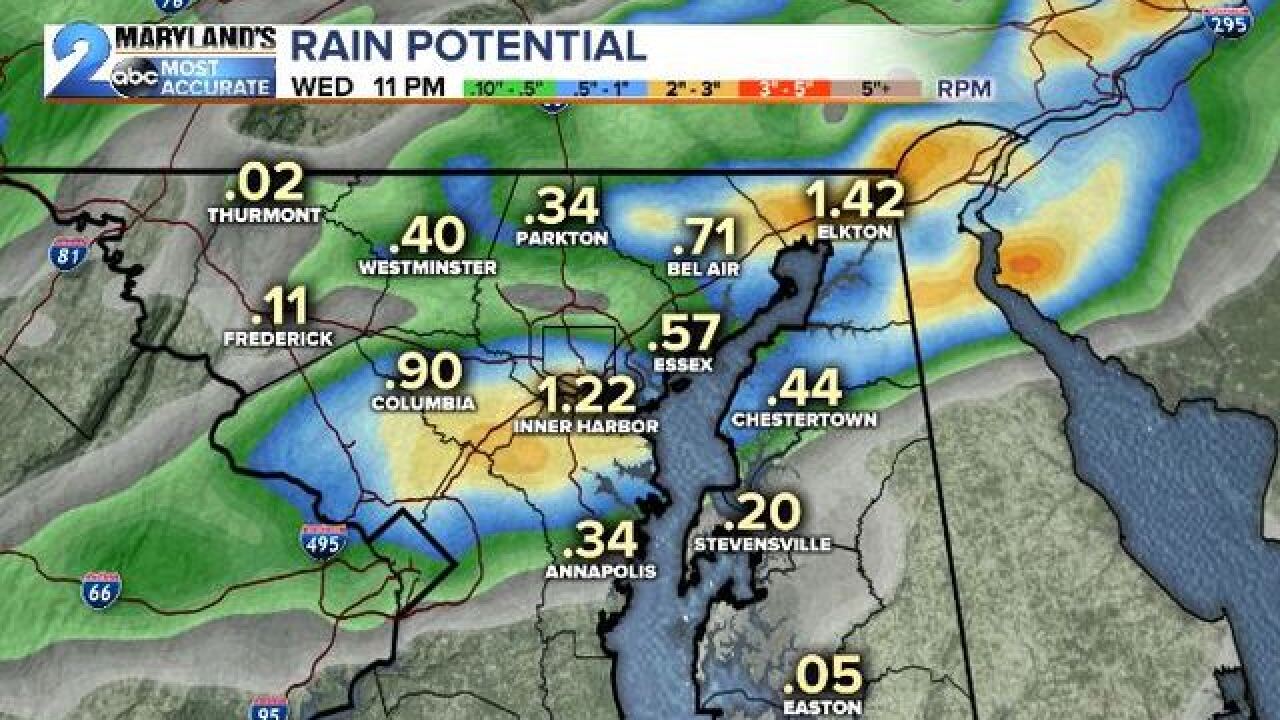 Severe weather is back in the forecast for central Maryland as a powerful cold front plows our way Wednesday. Out ahead of the front we have temperatures right around 85-90 degrees and plenty of humidity to equal great storm fuel. There is also a bit of wind of aloft at airplane level 5,000ft off the ground which will be forced to the surface to give us our damaging wind threat with any storm that forms.


The potential for Wednesday's severe storms are somewhat dependent though on how much sunshine we can see during the first half of the day and the timing of the front. Of course the more sunshine means more storm fuel and a higher threat for severe storms come early evening. If the front arrives later and the low clouds/fog hold tighter in the morning the threat could be reduced.

As of now the Storm Prediction has us in a "Slight Risk" for severe weather. On a scale of 2 to 5 we are running about a 2 which simply means that we have a low end risk for severe weather with gusty winds and small hail as the predominant threats. Southern Maryland is sitting right on the fringe of the threat since the front looks to push through those neighborhoods later Wednesday night.

Storms should begin developing after 4pm and continue through at least 8-9pm in the evening. The best chance for strong to severe storms would be between the 5-8pm since this will be when most of the storm fuel will be available for the taking.


Winds at the surface will be coming in from the southwest, while the wind higher up comes in from the west. This leads to some extra lift and convergence in the atmosphere above precluding a damaging wind threat across the area. The best chance for this to happen looks to be over the Eastern Shore and up to the north across Baltimore/Carroll/Cecil/Harford counties. Tornado threat looks to be at 0 for this event. Rainfall amounts around 1" with poor drainage flooding concerns.


The time is now to remember your weather action plan. Know your safe spot to go and remember when a warning is issued to take immediate action. Make sure you have a way to get weather information, should any alerts be issued. Our WMAR2News app is free for any smartphone or tablet. If you can't get alerts by phone be sure to stay with us throughout the day on Facebook and Twitter for the latest.