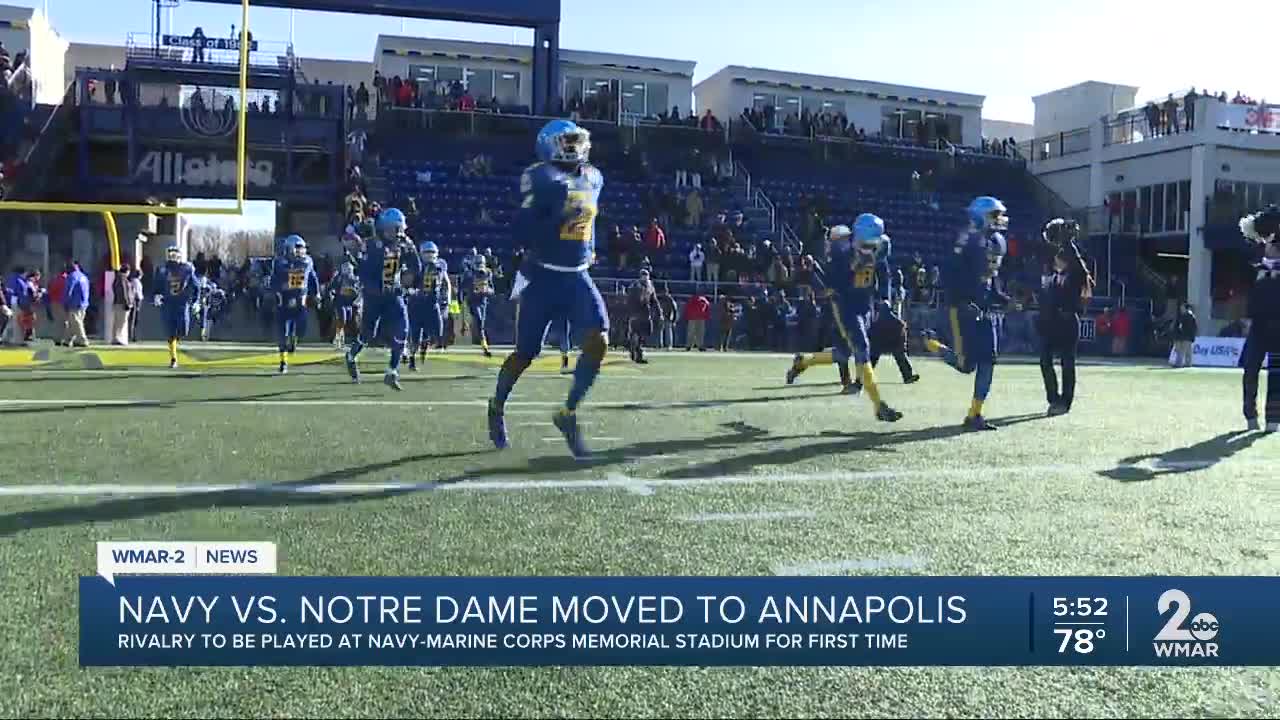 The Navy vs. Notre Dame football game will be played in Annapolis for the first time in the rivalry's 94-year history. 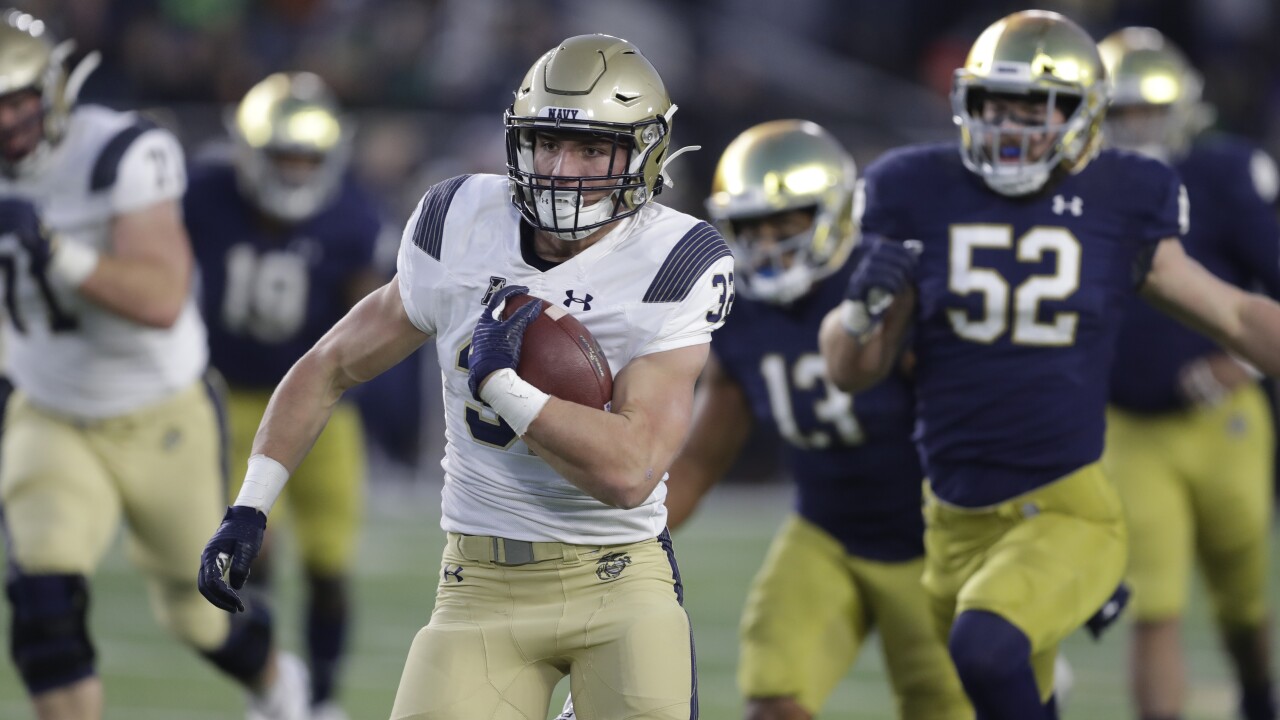 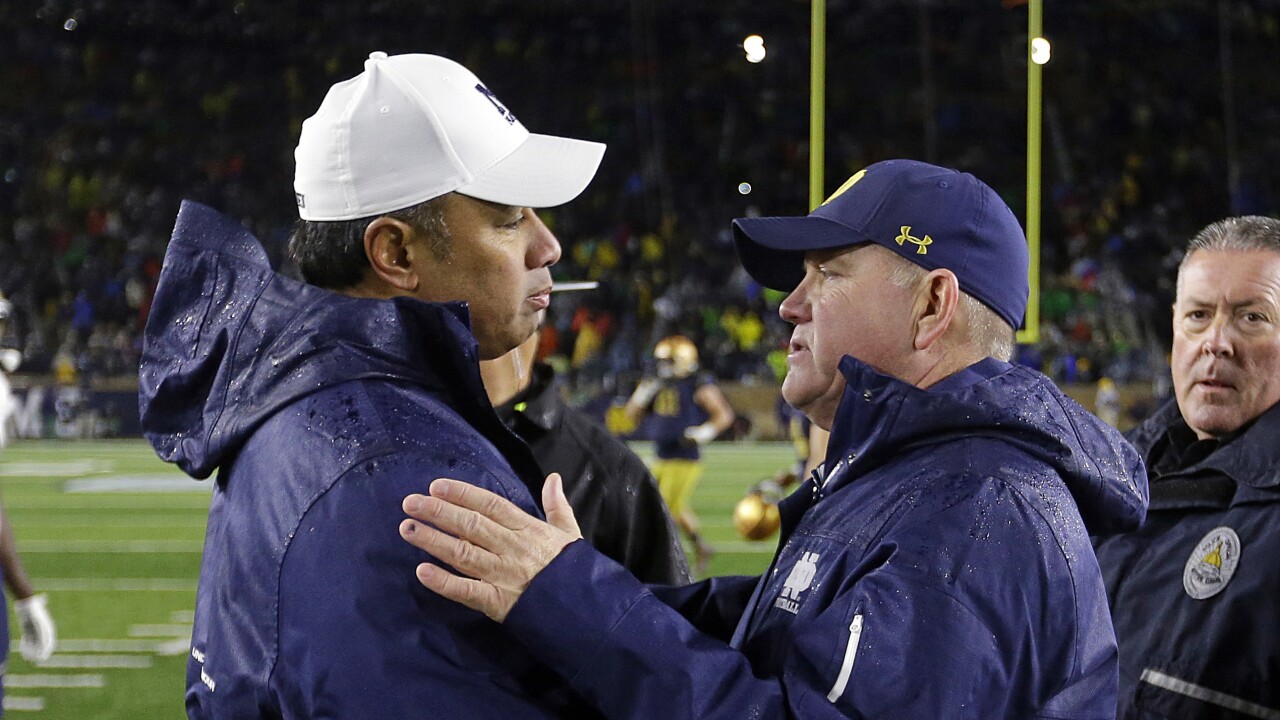 ANNAPOLIS, Md. — The Navy vs. Notre Dame football game will be played in Annapolis for the first time in the rivalry's 94-year history.

The game is set to be played at Navy-Marine Corps Memorial Stadium on either Saturday, September 5 or Sunday, September 6. It was originally scheduled to be played in Dublin, Ireland on August 29 but was moved due to the coronavirus pandemic.

Below is a press release from the Naval Academy:

Following extensive consultation with the Irish government, medical authorities and the leadership teams at Navy and Notre Dame, the Aer Lingus Classic football game scheduled for August 29 will not be played at Aviva Stadium in Dublin, Ireland.

It is the intention of both Navy and Notre Dame to open the 2020 college football season with the 94th consecutive playing of the longest continuous intersectional rivalry in the country at Navy-Marine Corps Memorial Stadium in Annapolis, Md. The game will ideally be played Labor Day weekend (Saturday or Sunday) and televised nationally by ESPN or ABC.

"We are obviously disappointed not to be traveling to Ireland this August,” said Naval Academy Director of Athletics Chet Gladchuk. “But, as expected, our priority must be ensuring the health and safety of all involved. I am expecting that we will still be able to play Notre Dame as our season opener, but there is still much to be determined by health officials and those that govern college football at large. Once we have a definitive plan in place, we will announce the specifics pertaining to the game. I am extremely grateful to all that were involved in the planning of our game in Aviva Stadium, especially John Anthony and Padraic O’Kane who created what would have been another extraordinary event in Dublin. I realize many are disappointed and were looking forward to the spectacle of this event and a visit to the Emerald Isle, but I do know there is a complete understanding of why it's in our best interests to make every effort to relocate the game."

“Our student-athletes have had great experiences competing in Ireland and are very disappointed not to be returning to Dublin in 2020,” said Jack Swarbrick, Vice President and James E. Rohr Director of Athletics at Notre Dame. “The change of venue has been a very difficult decision for our colleagues at the Naval Academy, but we are in full support of their choice. We are also grateful for everything our partners in Ireland have done to make this a smooth transition. We look forward to going back to Ireland for a game in the not too distant future."

“College football is one of the greatest spectacles in world sport and we had been thoroughly looking forward to welcoming Navy and Notre Dame here this summer for the first game of the Aer Lingus College Football Classic Series,” said Leo Varadkar the Prime Minister of Ireland. “Unfortunately, due to circumstances beyond our control, that is now not possible, but we hope to see both universities return to Aviva Stadium in the coming years. I want to personally thank both Chet Gladchuk and Jack Swarbrick for their efforts to bring the game to Ireland and we hope to welcome both teams back in the near future”

Navy and Notre Dame will continue to work closely with the event organizers to plan for a return to Ireland in the coming years. Information on ticket refunds will be forthcoming.