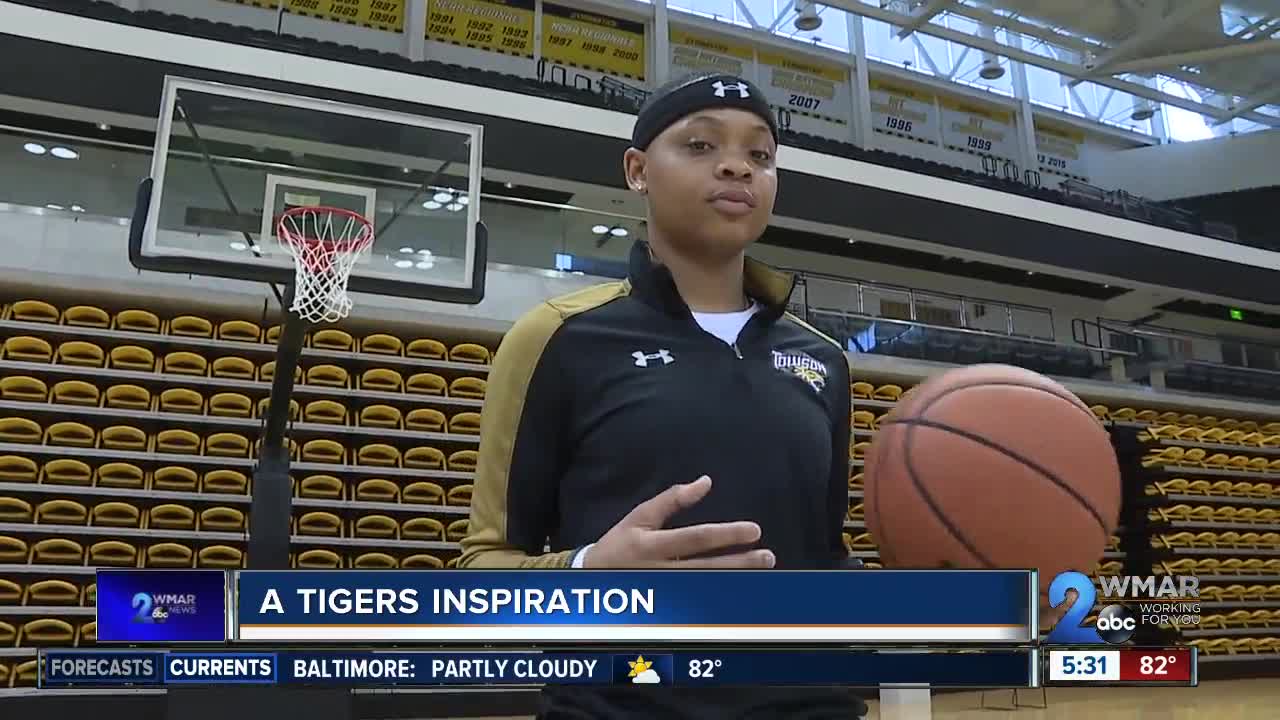 TOWSON, Md. — She's the heart and soul of the Tigers.

She keeps to herself.

But boy does Kionna Jeter have a story to tell.

“It was kind of scary just knowing that basketball could be took away from me,” said the Towson Tigers guard. “That's all I know.”

Last season Jeter led the Tigers in scoring as a transfer. The sophomore led her team to their first NCAA Tournament appearance.

“In 2018, February 3, I was shot twice in my back and fractured my shoulder blade,” said Jeter.

It happened in her hometown of Spartanburg, S.C. Kionna was shot during a drive-by while waiting in a car to pick up her brother from a friend's house. She wasn't the intended target.

“It just happened so quick. I was like, 'They're shooting'. By the time it came out of my mouth two bullets were already in my back.”

Kionna's life was in jeopardy. But she pulled through and faster than anyone thought possible.

“Estimated to be out for 12 weeks, and I worked my way back on my own within two months. At that point it was scary, not knowing what my next move would be, not knowing if I'd be able to play basketball again.”

“And I said 'Well, did she shoot anybody?' And he said 'No. She was just involved in it. Wrong place. Wrong time.' I said 'Well, get her on the phone.',” said the Tigers Head Coach.

So with some resolve and some resilience Jeter made the transition to Towson.

“I fought my way out of depression," she said. “I used to have nightmares all the time when I first came (to Towson).”

And she had a nightmare of a trip to play West Virginia University late last year when the Mountaineers mascot fired off its replica musket pregame.

“We had warned her before that that's what they typically do and then the gun went off,” said Richardson. “You could tell it really, really affected her and she went back into the locker room and just broke down.”

But after that she just kept getting better and better. She has overcome to not only be a light for her team but also a source of motivation for athletes all over the country.

“Everybody loves her,” added Richardson.

Next week she'll find out if she's the winner of the 2019 Inspiration Award, presented annually at the Collegiate Women Sports Awards. Kionna is one of four finalists.

The winner will be announced on Monday night, June 24, during a presentation in Los Angeles.

Win or lose Kionna's just happy to still be here and she's making the most of every second.

Being shot last year wasn't the only time Jeter defied death. She was hit by a car at 2 years old when she was trying to get a basketball in the street.

“It's a blessing to be alive,” she said. “That I can still be able to do what I do and be around people who I love.”