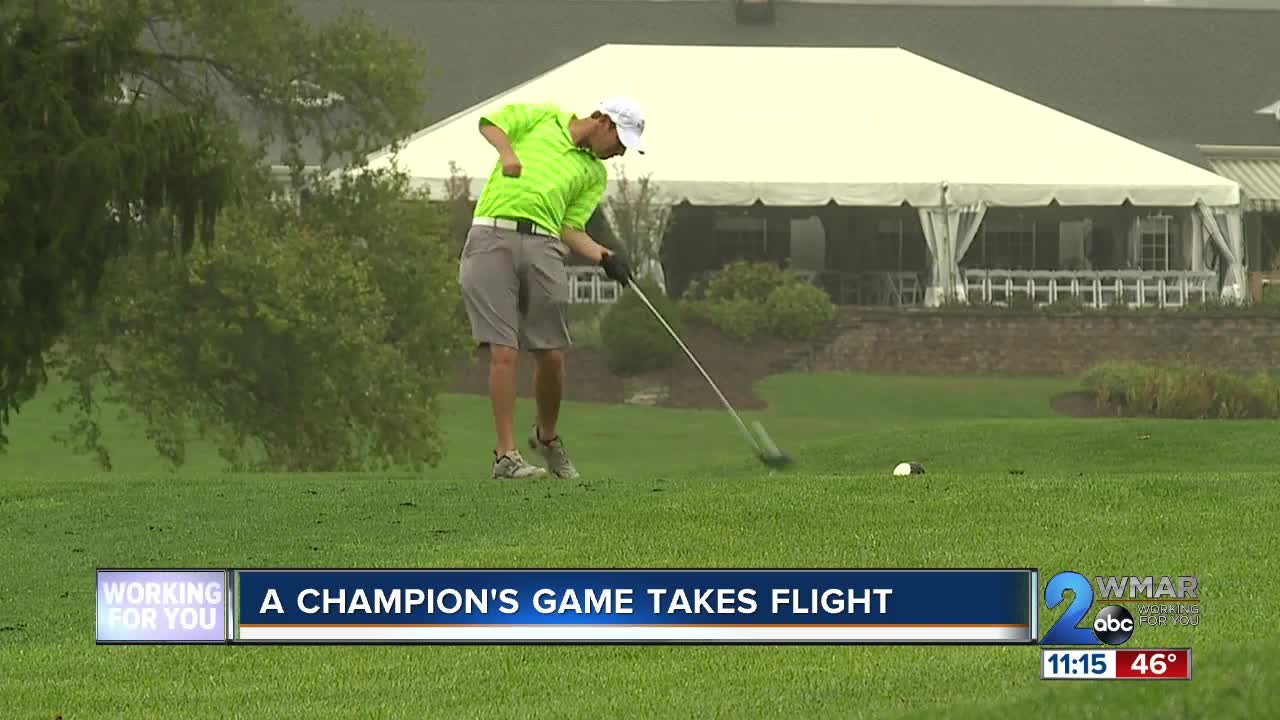 Golf is a beautiful game. To play it well takes skill, luck and a whole lot of patience.

BALTIMORE — Golf is a beautiful game.

To play it well takes skill, luck and a whole lot of patience.

Vince Biser’s got all three.

“I started playing golf when I was a little kid hitting wiffle balls in the back yard,” he said.

His path to becoming a continental champion started squarely in the rough.

“The cerebral palsy, I only have use of one arm.”

The 31-year-old from Towson was born with cerebral palsy. He suffered a stroke in utero. C.P. left him without full use of the right side of his body.

“It would knock me out all day,” he said. “Sometimes I’d be at school and some of the seizures, I’d black out and all of a sudden I’d wake up in the nurse’s office and I had no idea how I got there.”

He suffered multiple violent seizures per week for years. When he was 16 his parents took the drastic measure of having him undergo a hemispherectomy.

“A hemispherectomy is exactly that. They take out half of your brain,” said Vince’s father, Andrew.

After the procedure Vince became a whole new kid.

“It was a miracle because, two things,” described Andrew Biser, pausing to collect his emotions. “It stopped all the seizures and there was no apparent cognitive dysfunction after the operation.”

Vince had his life back. His golf game took flight. Before he knew it he was competing internationally.

“The first year I played in the North American One-Armed Golf Championships is what made me want to get better. Seeing those guys and how good some of those guys were. Then three years later I started beating them,” laughed Vince.

Vince Biser is a six-time champion of the North American One-Armed Golfer Association. The organization has been around for two decades and has over 200 members.

Like any great champ, Vince is always looking to improve his game.

“When I first heard Vince’s story I was just blown away by the things that he’s been able to overcome,” said Steve Bumbry.

Steve was set on a path the big leagues, just like his dad. He was drafted by the O’s in 2009. But, several injuries derailed his baseball career. Five years ago he retired after suffering his fourth concussion.

“It was very, very difficult,” said Bumbry. “I remember often just being at home all alone crying hysterically, uncontrollably realizing that dream was over.”

He started focusing on the next chapter of his life - the business world. He founded his own CBD company named Bee Well CBD.

CBD stands for cannabidiol. It comes from the cannabis plant, doesn’t contain THC, doesn’t get you high. It’s completely legal. It comes in balms, tinctures and capsules and its growing in popularity.

“It is helping athletes with pain, inflammation,” said Bumbry.

“Sometimes my knee flares up on me and it takes that away. I feel like I have more energy and it just helps me out because with cerebral palsy I get tired real easily,” said Biser.

“We have solutions to minimize these things that might be limiting to us in the heat of competition,” said Bumbry. “So, I think we can reduce some of those symptoms to allow the natural abilities of the athlete to really come through.”

And there’s no debating those natural abilities when it comes to this champion.

“People that think you can only play golf with two arms that’s not true. Or two legs, it’s not true,” said Biser. “You can play a sport no matter what your disability is and there’s no limitations.”

Golf is a beautiful game.

Vince Biser is one of its most beautiful players.

Half a brain. One arm. Whole heart.

Steve still often thinks ‘what if’ he was able to continue his baseball career. As for his CBD business, the products are sold strictly online. He’s looking to open a brick-and-mortar store in the future. His company sponsors Vince.