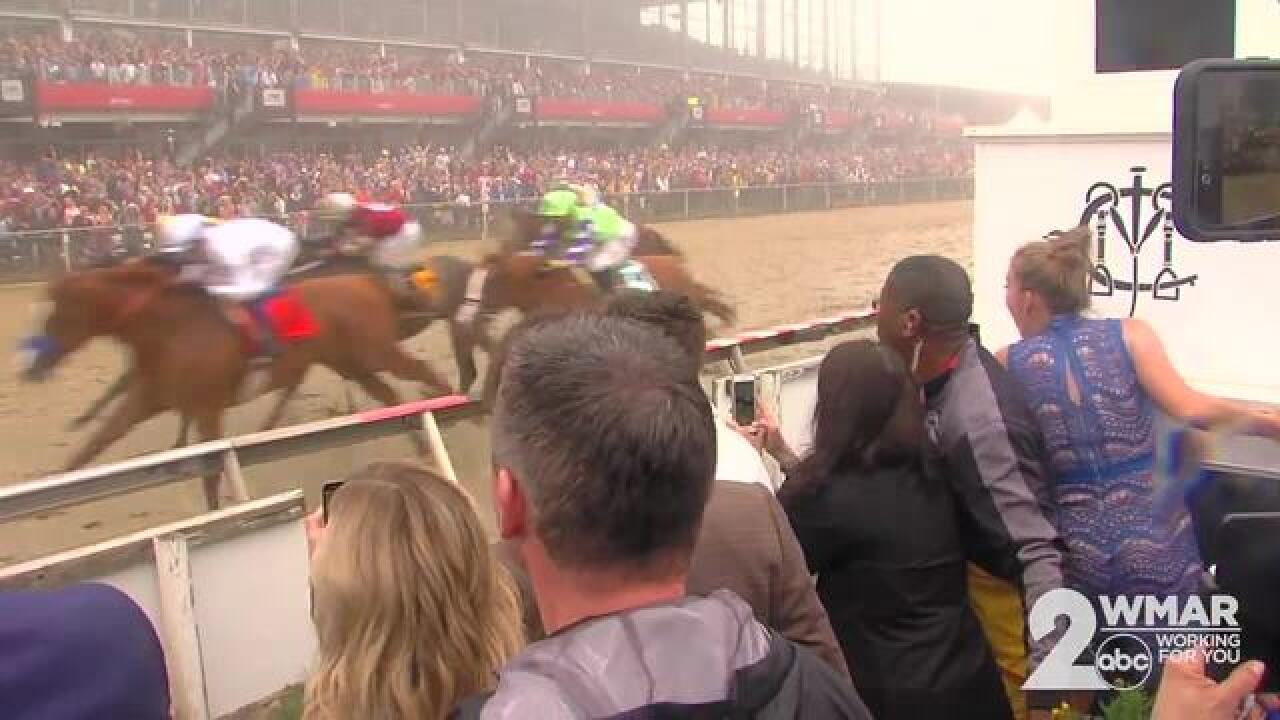 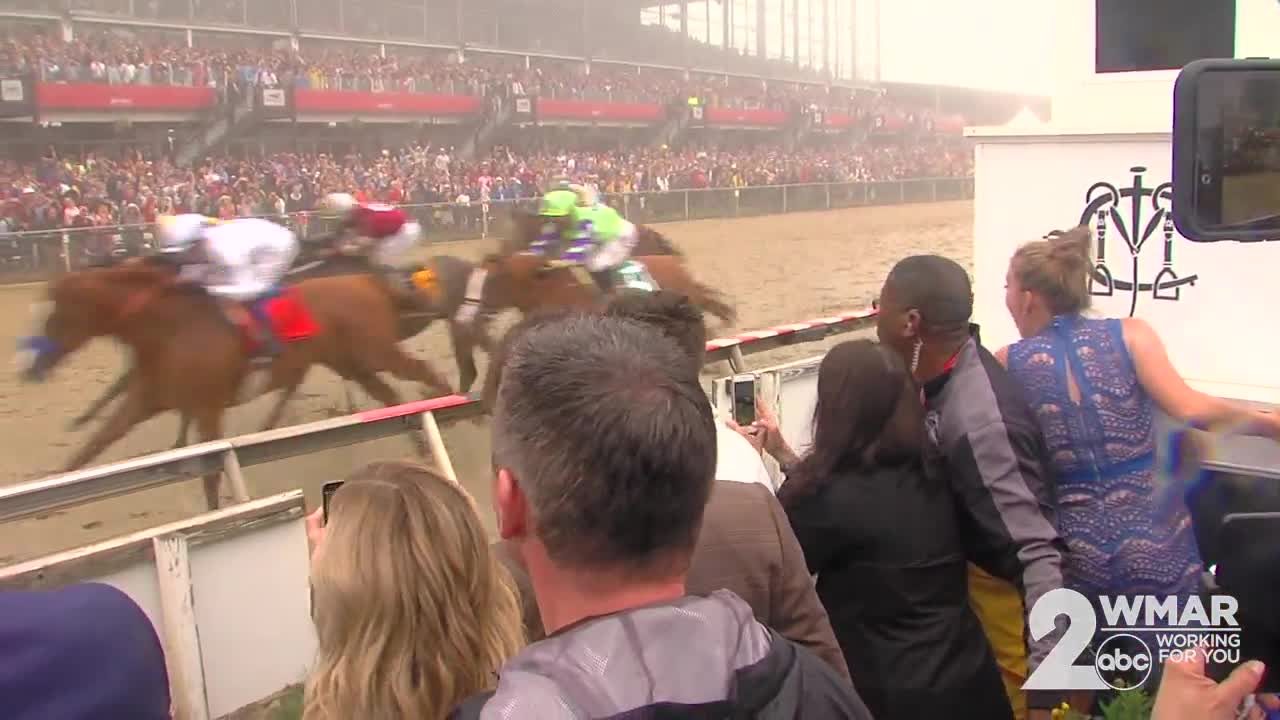 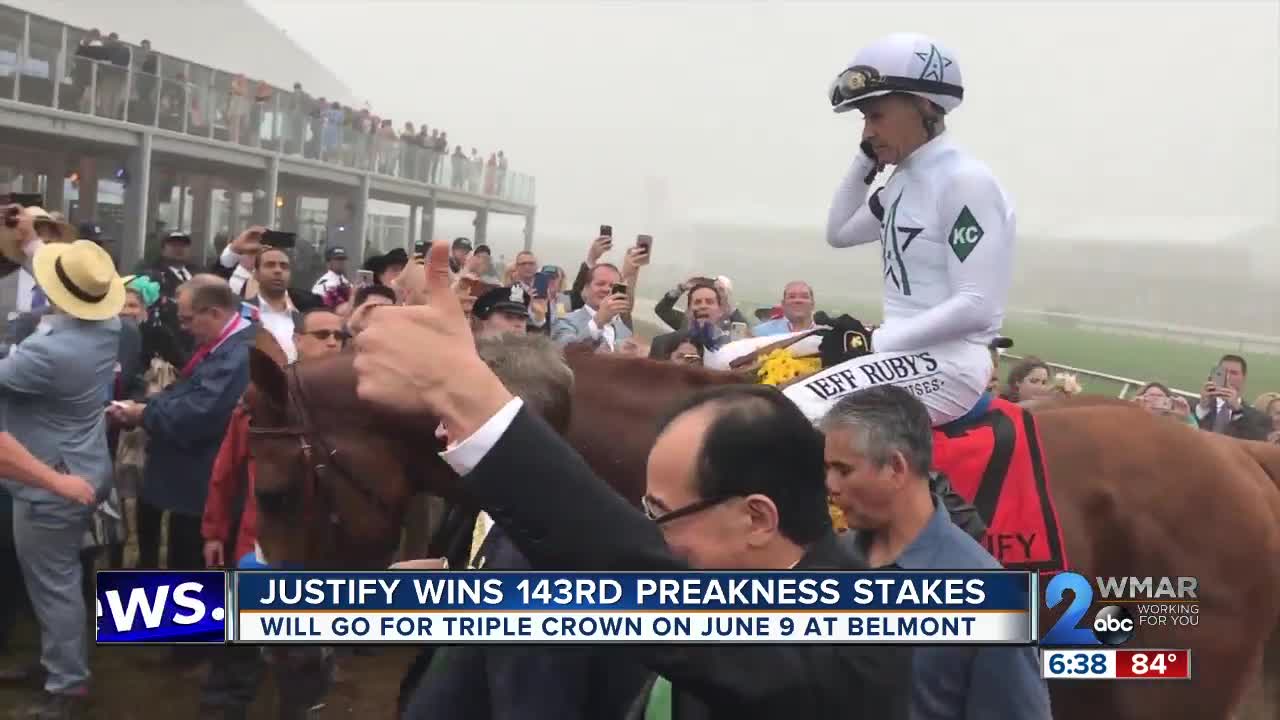 Justify rounded the final turn and hit the top of the stretch winded but with the lead.

The roar from the crowd was delayed, hushed by the thick fog that enveloped the track. When Justify emerged from the haze in view of the grandstand, trainer Bob Baffert could see jockey Mike Smith's white silks and knew his horse had been pushed to his limit with 100 yards left to go.

"I knew he was in for a fight," Baffert said. "I knew this was not going to be easy."

It wasn't easy, but Justify had enough left to hold off several hard-charging challengers and win the Preakness on a sloppy, slippery track Saturday and keep alive the chance for a second Triple Crown champion in four years. After winning the most difficult race of his career, Justify has the chance at the Belmont Stakes in New York on June 9 to accomplish the same rare feat Baffert's American Pharoah did in 2015.

Just getting through the Preakness was a test for the Kentucky Derby champion and heavy 2-5 favorite. When Smith looked over his shoulder early and saw Good Magic he thought, "Oh man, it's going to be a match race from this point on," and Justify held up to the challenge down the backstretch and late as Bravazo and Tenfold chased him down.

"They tested his fitness today," Smith said after his second Preakness win and first since 1993. "This is his hardest race that he's had."

With Baffert praying for the wire at Pimlico, Justify won by a half-length after completing the race in 1:55.93. Bravazo edged Tenfold for third, and Good Magic was fourth.

"What I saw of it, I liked it a lot," said veteran D. Wayne Lukas, who trains Bravazo. "I want them to extend it another 50 yards. ... We ran at him. We kept him honest just like we said we would."

Good Magic pressed Justify so much, the Derby runner-up faded near the end of the 1 3/16-mile race and fell out of the money for the first time in his career.

"It just wasn't a good trip," Good Magic trainer Chad Brown said. "I would have liked to see a different scenario, maybe where we're just off the pace a little bit, we weren't getting pressed on the fence the whole way. Disappointing."

That almost happened to Justify. Smith was worried when he saw Good Magic over his shoulder and when Justify slipped early, and he was hoping there was enough left to get to the wire.

Justify, who paid $2.80, $2.80 and $2.60 as the deserved favorite and improved to 5-0, showed more evidence of being the same kind of super horse as American Pharoah, and Baffert has repeatedly drawn comparisons between them. Those will only continue assuming Justify is good to go for the Belmont in three weeks.

"He has to come out of the race well, and he's got to be training really well," Baffert said. "I did the same thing with American Pharoah, all my horses that ran the Triple Crown, they have to be 100 percent."

Justify looked every bit of 100 percent after a bruised heel in the Derby caused quite the firestorm. A bigger question now is how the lightly-raced colt who didn't run as a 2-year-old handles a mile and a half.

Had the Preakness been just a tenth of a mile longer, Justify might have been caught, though Smith thought he had plenty of horse left.

"He withstood that, and even though he got tired today, he was also looking around a bit at the end," Smith said. "Although it was a half a length, I certainly could've got after him a whole lot more a little earlier and made him do a little more, as well."

Justify never had to work this hard to win a race, winning his first four starts by a combined 21 1/2 lengths. He didn't blow away the field of three Derby horses and four new challengers, but he showed something else

"These great horses, they just define themselves when they get in that situation," Baffert said. "He just showed not only is he a big, beautiful, gorgeous horse, but he is all racehorse, and that's what it took to win."