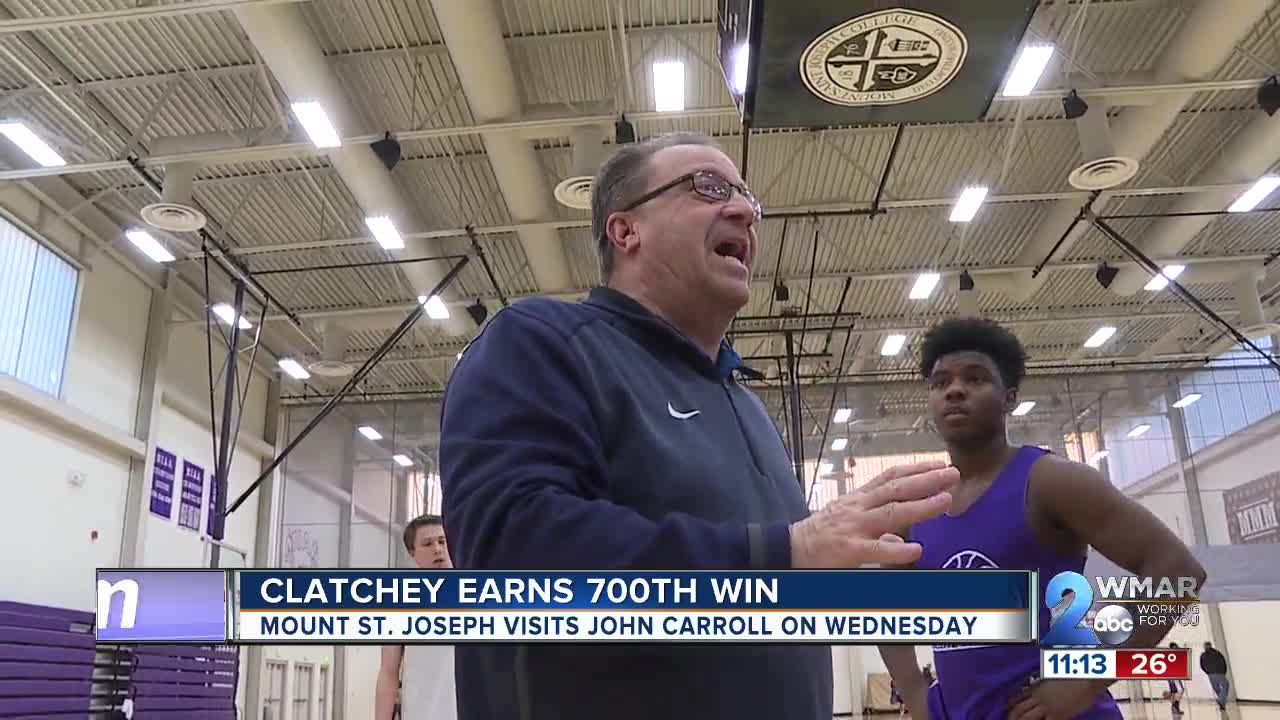 BALTIMORE, Md. — Over his 28 years of coaching hoops at Mount St. Joseph Pat Clatchey has just about seen it all.

“After you’ve coached a long period of time you’re fortunate enough to hit some milestones and 700, it is a lot of wins,” he said.

Clatchey, one of Baltimore’s all-time great high school coaches, earned win No. 700 Friday in a 62-53 victory over St. Frances.

“It wasn’t a goal when I started but, as a coach, it’s nice to be successful,” he said.

“He definitely is a great coach and he loves to win,” added Gaels senior guard Tyler Brelsford.

“I just remember my freshman year seeing Coach Clatchey getting his 600th win,” said Gaels senior forward Jason Edokpayi. “So, I was just thinking to myself ever since it would be something crazy if I was able to get him his 700th win.”

And he was against one of the best teams in the country.

The Gaels handed the Panthers (21-3) their first losses in the Maryland Interscholastic Athletic Association ‘A’ Conference and Baltimore Catholic League.

“Just to get it against St. Frances, at the time they were No. 10 in the country and we weren’t even ranked in probably the top 100. It just meant the world,” said Edokpayi.

M.S.J. is 17-3 overall, 10-2 in the MIAA and 7-0 in the BCL. Clatchey said their roster may not boast superstars like alumni and Maryland Terrapins Jalen Smith and Darryl Morsell, but what they do have is chemistry.

“We have good players and they play well together,” said the head coach.

The first chance at getting Clatchey win No. 701 comes Wednesday night as the Gaels travel to John Carroll (15-5).

Mount St. Joe scored a 26 point win in the season's first match-up between the two schools back on January 5.

“There’s no carry over,” said Clatchey. “We got to go on the road and we got to be ready to play.”

“We definitely have to come to play because everyone wants to play hard when they play Mount St. Joe,” added Brelsford.