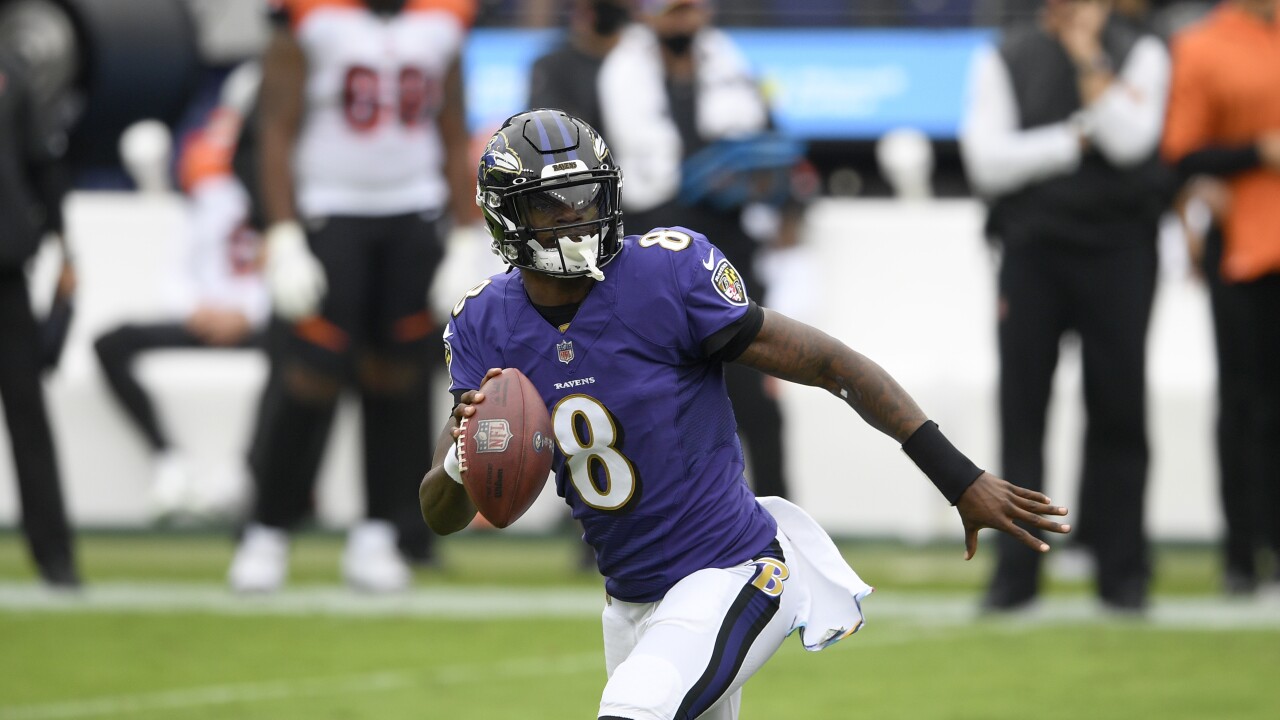 Nick Wass/AP
Baltimore Ravens quarterback Lamar Jackson (8) in action during the first half of an NFL football game against the Cincinnati Bengals, Sunday, Oct. 11, 2020, in Baltimore. (AP Photo/Nick Wass)

OWINGS MILLS, Md. — When you are winning by an average of almost 22 points per game, there’s not much you can complain about.

The Ravens offense appears to be regressing. But, still, the quarterback is keeping it positive.

The Ravens offense is ranked No. 24 in the NFL and it is ranked next to last in passing. Baltimore's air attack averages only 178.8 yards per game.

"We had a pretty good day when we played against the Browns with our passing game and there was nothing being said about it," said Jackson. "But now it’s like since we’re not progressing, I guess, from that week, people got second-guesses going on. But, I feel we’re going to be good."

The Ravens passed for 270 yards and three touchdowns in their week one 38-6 victory over Cleveland.

Lamar and company may be a victim of their own expectations coming off a record 2019 season.

"2019 was an historic year and we just had a lot of things going for us and 2020 is different and the 2020 Ravens are different," said Ravens running back Mark Ingram.

But the run game is still the staple. Baltimore leads the NFL with 5.6 yards per carry even while trying to strike that run-pass balance.

"We know that we haven’t played our best," added Ingram. "The 2020 Ravens are still working on our identity."

"We’re just trying to move the ball and score points by any means necessary," said Ravens Head Coach John Harbaugh. "There’s really no rules in terms of which direction we go with those kind of things. We just want to find ways to get it done and we’re searching for things on offense right now. We always will."

The Ravens may want to drop back less this Sunday in Philly. The Eagles rank third in the league with 18 sacks.

On defense things are going swimmingly for the Ravens and their emerging star rookie linebacker Patrick Queen. He was named AFC Defensive Player of the Week on Wednesday for his performance in last Sunday's 27-3 win over the Bengals. Queen registered nine tackles, one sack, one forced fumble, two fumble recoveries and a 53-yard touchdown in the game.

Among the absences at practice Wednesday was left tackle Ronnie Stanley. He's been dealing with shoulder, ankle and hip issues this season.