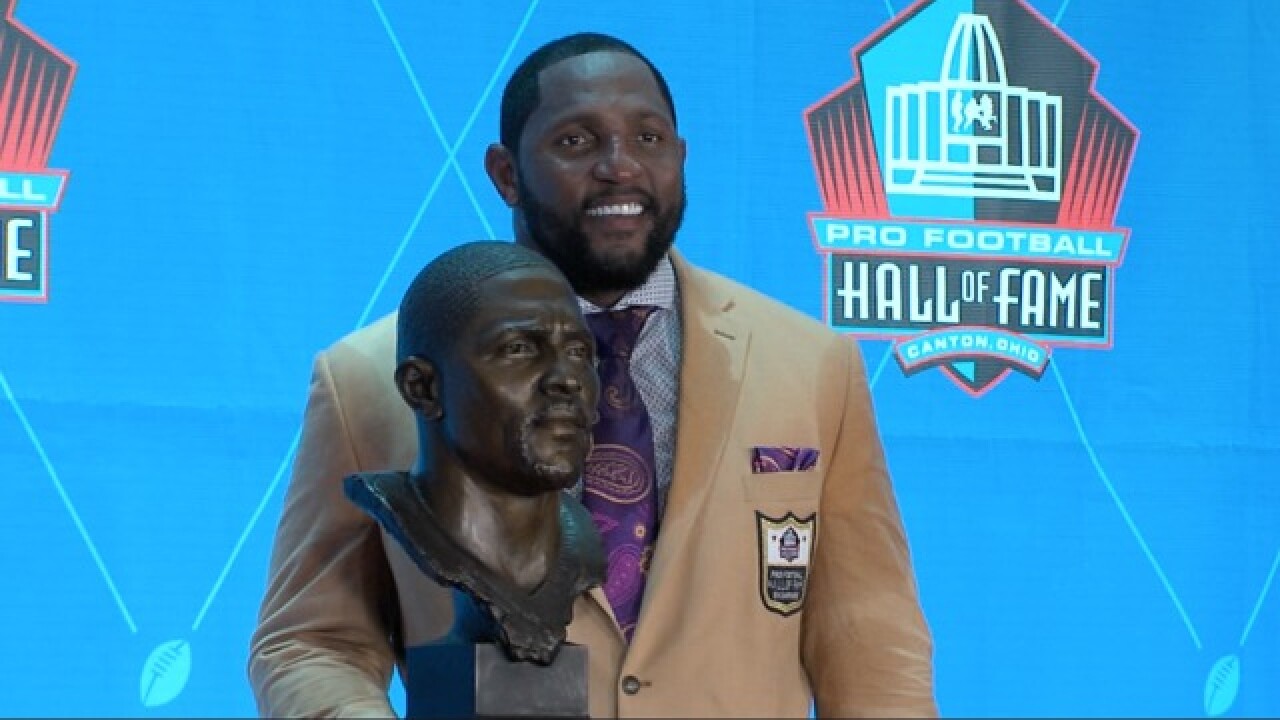 Copyright 2018 Scripps Media, Inc. All rights reserved. This material may not be published, broadcast, rewritten, or redistributed.
<p>Ray Lewis with his Pro Football Hall of Fame bust</p>

With a passionate 33-minute speech in which he strolled around the stage, ad libbed, praised and joked, spoke of sacrifice, love, glory and overcoming the odds, Ray Lewis entered the Pro Football Hall of Fame.

One of the best linebackers and leaders the game has seen, Lewis was the final man inducted of the seven class of 2018 members on hand. He was preceeded by Randy Moss, Brian Dawkins, Brian Urlacher, Jerry Kramer, Robert Brazile and Bobby Beathard.

Terrell Owens was not in Canton, Ohio, choosing instead to hold his own ceremony in Chattanooga, Tennessee.

“Tell me something can’t be done is like pouring lighter fluid on an open flame,” said Lewis, a two-time Defensive Player of the Year who won a second Super Bowl with the Baltimore Ravens for the 2012 season — coming back from a torn triceps — then retired. He was the MVP of the 2001 title game.

Ray with his Hall of Fame bust. #Ravens pic.twitter.com/WxVAheoOez

“I came back, and boy did I come back,” Lewis said. “When you walk off the last time with that thing, that Lombardi, it’s a confirmation I am living proof of the impossible.”

A first-year nominee, Lewis was selected 26th overall in the 1996 draft — what were other teams thinking? He wasn’t even Baltimore first choice: Jonathan Ogden was, and the big tackle made the Hall of Fame in 2013.

His impact was immediate, both on the field, in the locker room, and even in pregame introductions, when his “squirrel dance” fired up fans and teammates alike. He and Ogden even did a short version on the stage.

Lewis was the first player with 40 sacks and 30 interceptions in a career. An eight-time All-Pro and inside linebacker on the 2000s NFL All-Decade Team, he had a franchise-record 2,643 career tackles.