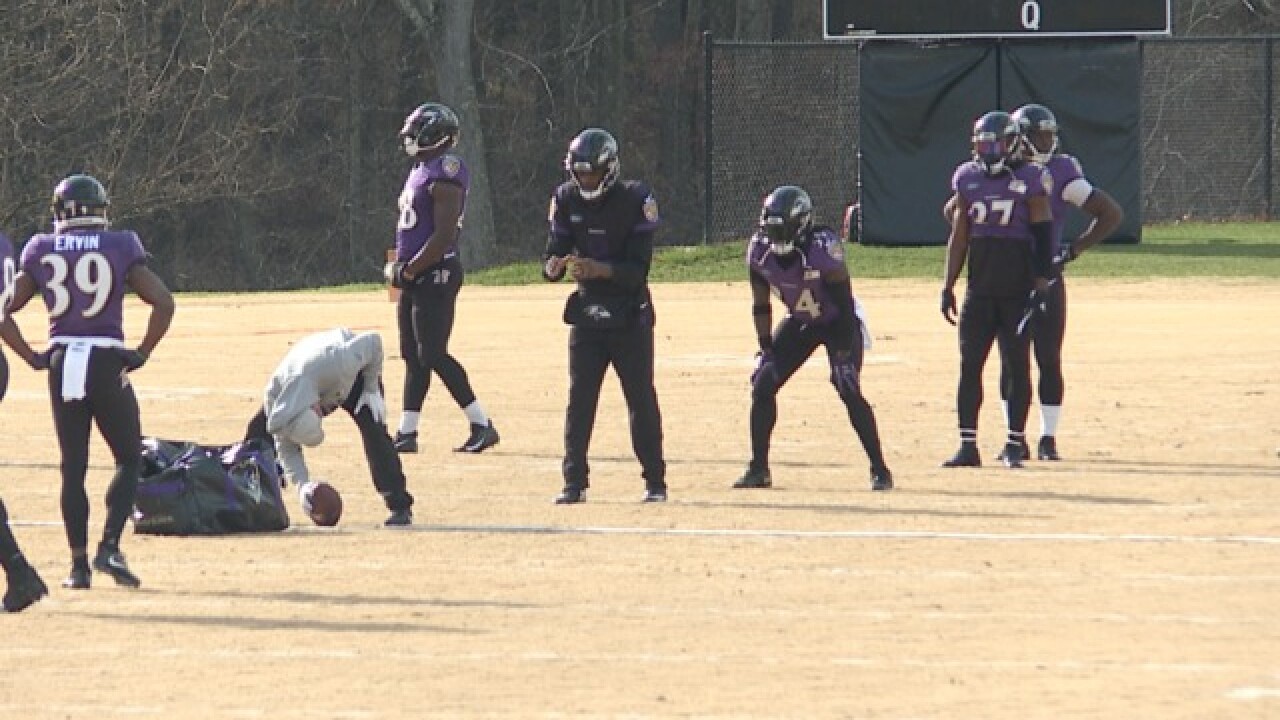 Copyright 2018 Scripps Media, Inc. All rights reserved. This material may not be published, broadcast, rewritten, or redistributed.
<p>Ravens quarterback Lamar Jackson during practice</p>

Which quarterback will start on Sunday?

The Ravens are quite content with keeping people guessing.

“I’m just not going to get into it. Just leave it alone. I don’t feel like we owe anybody any answers,” said Ravens head coach John Harbaugh.

There was sign of Joe Flacco at practice on Wednesday. The veteran injured his right hip in the Nov. 4 loss to the Pittsburgh Steelers.

If Flacco can’t suit up rookie Lamar Jackson would be in line for the first start of his NFL career. The first-round draft pick has backed up Flacco all season.

How prepared does he think he is if he was called upon to start?

“I feel I’ll be very prepared,” he said. “I’m trying to sponge everything in. I’m trying to learn the ins and outs. So, whatever happens is going to happen.”

Jackson said he is approaching this week like any other week. If he’s called upon to start he has to be a leader right away.

“You got to have trust with your guys. Your guys believing in you to put points on the board. That will be my job if I’m out there,” he said.

Willie Snead says he wants Lamar to trust his teammates, the scheme, and everything he’s learned.

“He’s willing to work and put the work in day in and day out,” said the Ravens receiver. “So, that’s just one thing we tell him over and over again - just trust us. Trust that we’re going to make the plays and if you put the ball there we’re going to do what we do.”

Robert Griffin III would be Jackson’s backup if he starts. RG3 has been inactive all year.

“If I get that opportunity to go out there and play I’m going to make the most of it and show these guys not only how hard I’ve been working, but how much I believe in them,” said Griffin.

On tap this Sunday are the division rival Bengals. A loss to Cincinnati would drop Baltimore to 4-6 and all but end the Ravens’ playoff chances with several quality opponents and quarterbacks still looming on their schedule.

“We definitely can’t afford to let any more go. We don’t want to be on the outside looking in on this thing,” said Ravens linebacker Terrell Suggs.

If there’s ever a time for Snead and the Ravens offense to get back on track it’s this week.  Cincy’s defense is ranked dead last in the NFL. The Ravens managed 23 points against them in a week two loss.