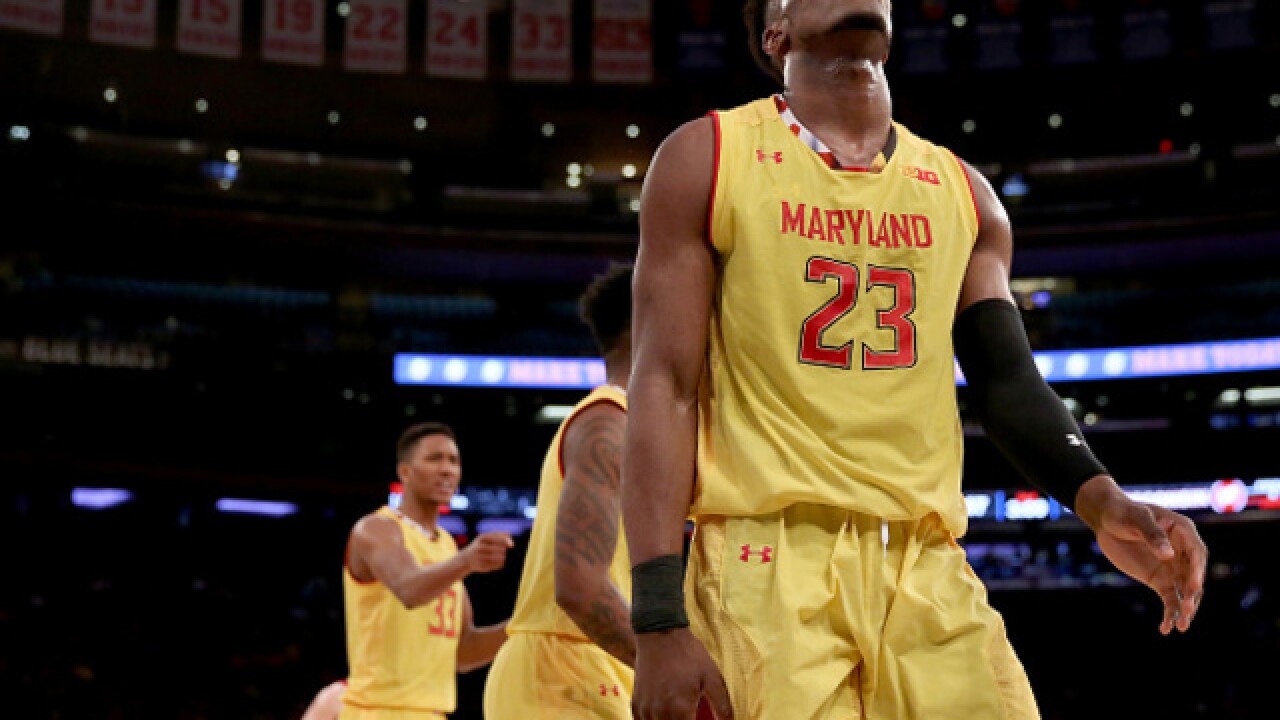 Copyright 2018 Scripps Media, Inc. All rights reserved. This material may not be published, broadcast, rewritten, or redistributed.
Elsa
<p>NEW YORK, NY - MARCH 01: Bruno Fernando #23 of the Maryland Terrapins reacts after he is called for a foul late in the second half against the Wisconsin Badgers during the second round of the Big Ten Basketball Tournament at Madison Square Garden on March 1, 2018 in New York City. (Photo by Elsa/Getty Images)</p>

Brevin Pritzl broke a tie with a foul-line jumper with 28 seconds left and Khalil Iverson secured the win with a steal in the waning seconds, leading Wisconsin past Maryland 59-54 on Thursday in the second round of the Big Ten Tournament.

Brad Davison and Iverson each made two free throws in the final nine seconds, and the ninth-seeded Badgers (15-17) advanced to the quarterfinals against top-seeded Michigan on Friday at Madison Square Garden.

Ethan Happ had 14 points and seven rebounds for Wisconsin, which has won five of seven. Davison finished with 13 points while Iverson had 11 and six rebounds and Pritzl 10 points. The Badgers won despite shooting 36 percent.

Kevin Huerter had 20 points for Maryland (19-13), which has lost seven of its last 11 games. Huerter missed the first of two free throws with the Terps trailing 55-53 with 9.2 seconds to play. Anthony Cowan Jr. added 16 points and Bruno Fernando had 12 points and nine rebounds.

Wisconsin never trailed in the second half, but it never led by more than three points in the final 11:40 until the closing seconds.

Pritzl's jumper broke a 53-all tie. Huerter, who scored seven of Maryland's final nine points, had a chance to tie the game when he was fouled on a drive by Happ. The sophomore guard missed the first and made the second. Maryland fouled Davison on the inbounds pass and he made both shots with 8.5 seconds to go for a 57-54 lead.

Wisconsin fouled Cowan rather than let him attempt a game-tying 3-pointer. Since it was a nonshooting foul, the Terps had to inbound with 5 seconds to go and Iverson stole Dion Wiley's pass and then closed the game with two free throws.