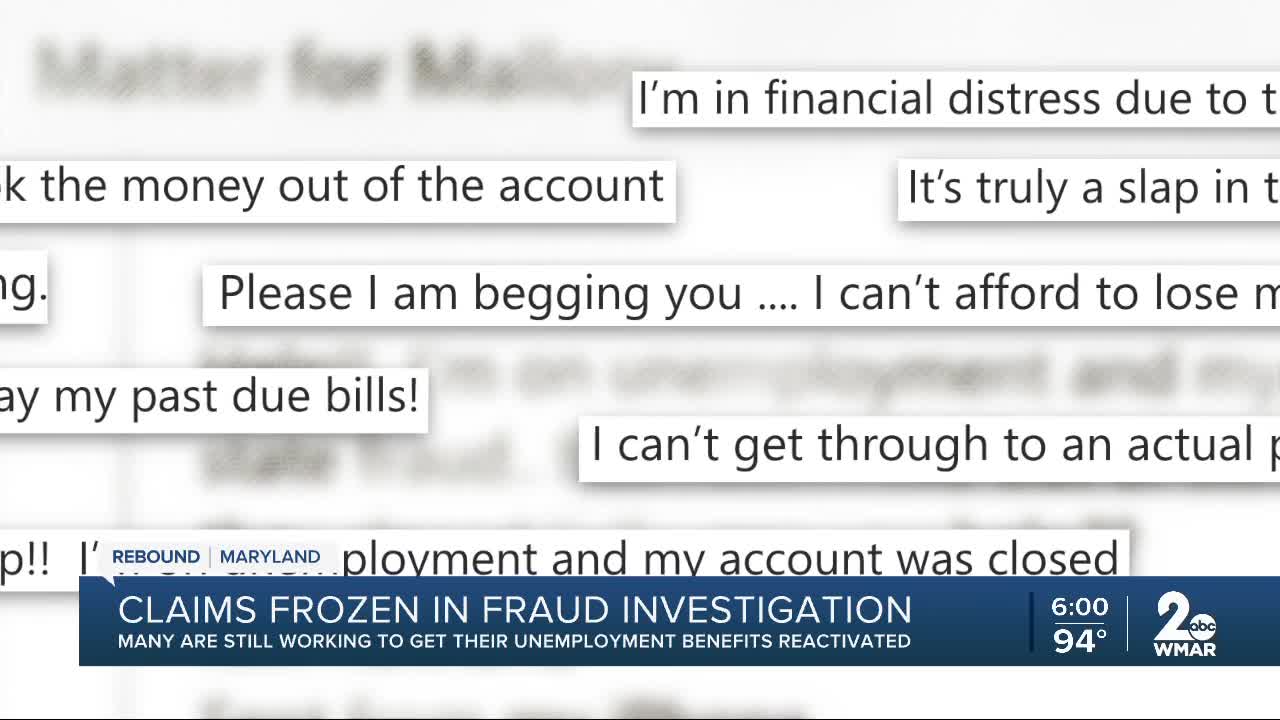 Panic is setting in for claimants whose unemployment insurance benefits were frozen in a recent fraud investigation. The first of the month is days away and many have bills to pay with no way of accessing their accounts.

BALTIMORE — Panic is setting in for claimants whose unemployment insurance benefits were frozen in a recent fraud investigation. The first of the month is days away and many have bills to pay with no way of accessing their accounts.

Kim Rowland didn't know her benefits had been cut-off until she tried using her card.

“And I was told the account had been closed,” said Rowland.

The uncovering of a massive fraud scheme triggered the Maryland Department of Labor to put a freeze on thousands of accounts, some of them belonging to legitimate claimants.

“A few real people who really needed benefits got caught up in that because we had to put a hold on all those payments,” said Maryland Governor Larry Hogan in a news conference on July 15.

Governor Hogan added that benefits for legitimate claimants would be restored quickly.

Teresa Usher is in a similar situation.

“There’s nothing you can do, you just feel so lost,” said Usher who uses her benefits to support her family and grandchildren.

WMAR-2 News Mallory Sofastaii has learned more than “a few real people” were impacted. In an email to Sofastaii, a spokeswoman with the Department of Labor wrote, “hundreds of out-of-state claims [are] being verified and reinstated each day.”

And in a blog post published on Thursday by Sagitec Solutions, the vendor that created the BEACON One-Stop website, Sagitec wrote it "alerted the Maryland Department of Labor (MDOL) of potential fraud activity after identifying a spike in out-of-state Unemployment Insurance (UI) claims including regular and pandemic claims."

After performing an in-depth analysis, the company "quickly determined that a massive fraud scheme was attempting to defraud Maryland by utilizing automated bots and humans to file fraudulent claims. Sagitec consulted with MDOL and immediately froze most out-of-state accounts. Sagitec worked with MDOL and their banking vendor to block payments before they were made and where payments had been made block the use of those debit cards to more than 47,500 bogus claims saving Maryland and the Federal Department of Labor more than $501 million."

The company added that similar fraudulent activity was detected in Maryland’s in-state claims.

“I’ve not lived out of state. I’ve been here consistently working self-employed for 15 years and I don’t even fit that scenario,” said Rowland. “Now, I’m under threat of foreclosure.”

Rowland and Usher sent in the documents needed to verify their identities, but haven’t heard when they’ll be reviewed.

Usher said she was feeling hopeful after she waited 10 weeks to receive her benefits, when they were all of a sudden taken away.

“I’d like to get everything squared away and go back on track. I had it for three weeks almost, it actually worked for almost three weeks and then it stopped, so if I could get any help, I really thank you,” said Usher.

Sofastaii asked the Department how many of the 47,500 bogus claims were legitimate, but the agency did not say.

In a statement, a spokeswoman wrote:

Our fraud investigation in conjunction with the U.S. Department of Labor remains ongoing. Additional cases of fraudulent documentation have been uncovered, reinforcing the need to manually review these claims. The department has a team of specialists focusing solely on this manual verification of documents to ensure that we are reinstating legitimate accounts as quickly as possible.

EDITOR'S NOTE: This article has been updated. On Friday, Sagitec clarified that out-of-state PUA claims from states surrounding Maryland including PA, VA, WV, DE, and DC were not frozen, even though their blog post originally stated "all out-of-state" claims were frozen.