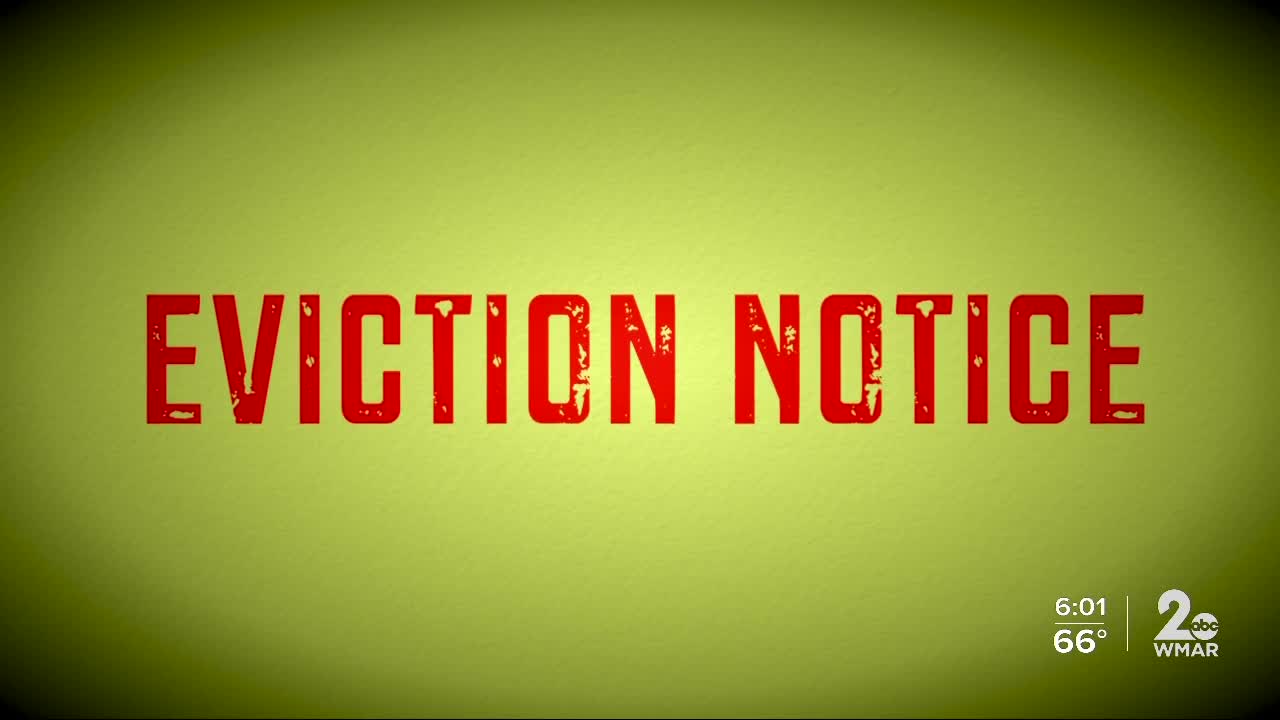 Currently, tenants are not guaranteed the right to an attorney, and a report by Stout Risius Ross, LLC (Stout) found that in Baltimore, 96 percent of landlords have lawyers in eviction cases, while only 1 percent of tenants do.

After analyzing case information from five civil legal aid providers in Baltimore City who represent tenants in eviction proceedings, Stout found that when tenants are represented, they can avoid disruptive displacement in 92 percent of cases, which translates to 5,777 households and 17,300 people each year.

While there's currently a moratorium on evictions, there's concern that with the rising unemployment and rent delinquency rates, there could be a flood of new eviction filings once the state of emergency is lifted.

"We know the economic devastation people are facing and that there will be even more evictions and the number of people who find themselves homeless as well," said Molly Amster, the Baltimore director for Jews United for Justice.

A separate study by Dr. Timothy Thomas looked at who's mostly likely to be impacted by evictions.

"Baltimore’s eviction rate is one of the highest in the nation and black and brown residents are impacted at a much higher rate than their white counterparts and that was before the pandemic," Amster said.

On Monday, housing activists held a virtual news conference on the two eviction studies, funded by the Abell Foundation, and invited tenants to talk about their experiences.

Terrell Askew, a Baltimore City resident, said his family was evicted from their home when he was a child due to an unpaid utility bill by a previous tenant.

"At the age of 7, I was forced to confront my family's poverty," said Askew. "It kind of felt like being dropped in the deep end of a pool suddenly."

Matt Hill, an attorney for Public Justice Center said with "right to counsel" legislation, this trauma can be avoided, as well as other costs to the city and state.

"The Stout study shows the city and the state can save $35.6 million with an investment of $5.7 million in 'right to counsel' for low-income tenants," Hill said.

"Right to counsel" legislation has passed in seven states and multiple cities, including New York City, where they’ve seen a 29 percent drop in evictions.

Several Maryland lawmakers were on the call and said they support the initiative.

“The protections put in place for renters during the state of emergency are important, but it’s crucial that we extend these protections once the state of emergency has been lifted. The “right to counsel” proposal is a step in the right direction to ensure that our efforts to protect Baltimore’s renters come full circle as we continue to navigate our way through the devastating impact of COVID-19.”

Last week, the Baltimore City Council approved legislation prohibiting landlords from raising rent during the pandemic and three months after the state of emergency is lifted. Landlords also aren’t allowed to charge late fees during that time period.

"The legal system can be confusing and stressful for litigants even without the occurrence of a global pandemic. Maryland Multi-Housing Association (MMHA) supports a right to counsel, at public expense, for all self-represented litigants in eviction proceedings, including residents and small landlords. We understand that while some cities have successfully employed such a program, others have not. Stakeholders should collectively learn from these jurisdictions and MMHA looks forward to engaging further in the discussion."

Hill added that they're working with lawmakers to get "right to counsel" legislation at the city and state level passed.

To read the reports and find out more information, click here.