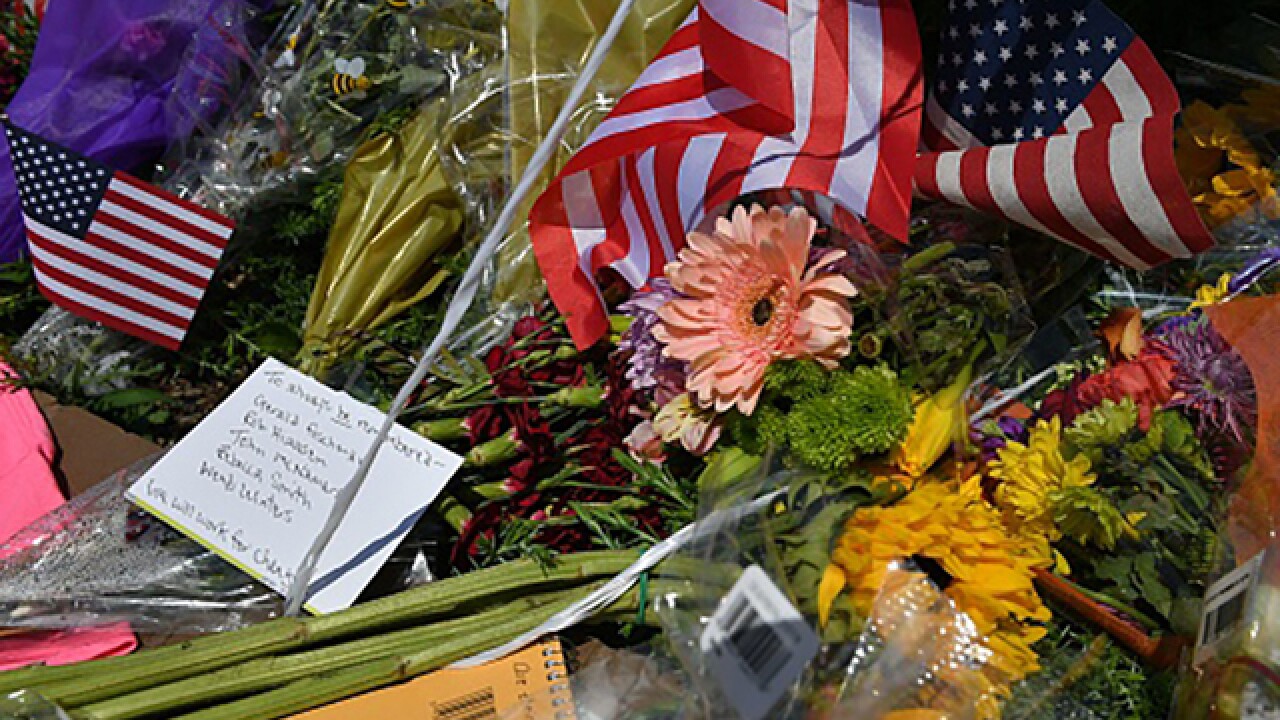 Copyright 2018 Scripps Media, Inc. All rights reserved. This material may not be published, broadcast, rewritten, or redistributed.
MANDEL NGAN
<p>Flowers, US flags and messages adorn on June 29, 2018, a makeshift memorial for five people killed at the Capital Gazette newspaper on June 28, in Annapolis, Maryland.  (Photo credit should read MANDEL NGAN/AFP/Getty Images)</p>

The University of Maryland, College Park will honor the victims of June's Capital Gazette shooting with two memorials, the school said Friday.

An executive seminar room in Knight Hall will be renamed by Maryland's Philip Merrill College of Journalism as on campus memorial to alumni John McNamara ('83) and Gerald Fischman ('79), adjunct professor Rob Hiaasen, and colleagues Rebecca Smith and Wendi Winters. A dedication ceremony, co-hosted by the school of journalism and The Diamondback student newspaper will take place in December.

Writing competitions will also be created in memory of Fischman and McNamara. A teaching award will be named in the memory of Hiaasen.

Before Maryland's football game against Temple Saturday, a moment of silence will be held in the press box for McNamara. A press seat will be dedicated to him, with a permanent placard of his name, at both Maryland Stadium and the XFINITY Center.

McNamara started covering Terps' athletics as a student, writing for the Diamondback. In 2001, he co-authored a book with Dave Efin on Maryland's men's basketball, writing another in 2009 about Terps' football.

Fischman also worked at The Diamondback when he was a student. He went on to become an award-winning editorial writer who began working at the Capital Gazette in 1992.

In the spring of 2018, Hiaasen taught news writing and reporting at Merrill College. He was scheduled to do so again in the fall. He started working at the The Capital in 2010 after being a feature writer for The Baltimore Sun for 15 years.

READ MORE: Novel by Capital Gazette victim to be published

Feature writer Wendi Winters started at The Capital Gazette nearly 20 years ago. Rebecca Smith was a recent hire, coming in as a sales assistant for the paper.

“These people served their community by practicing and supporting journalism,” said Lucy A. Dalglish, dean of Merrill College. “We hope these remembrances will be a consistent reminder of their example, and that their memory inspires others to seek truth and do good.”