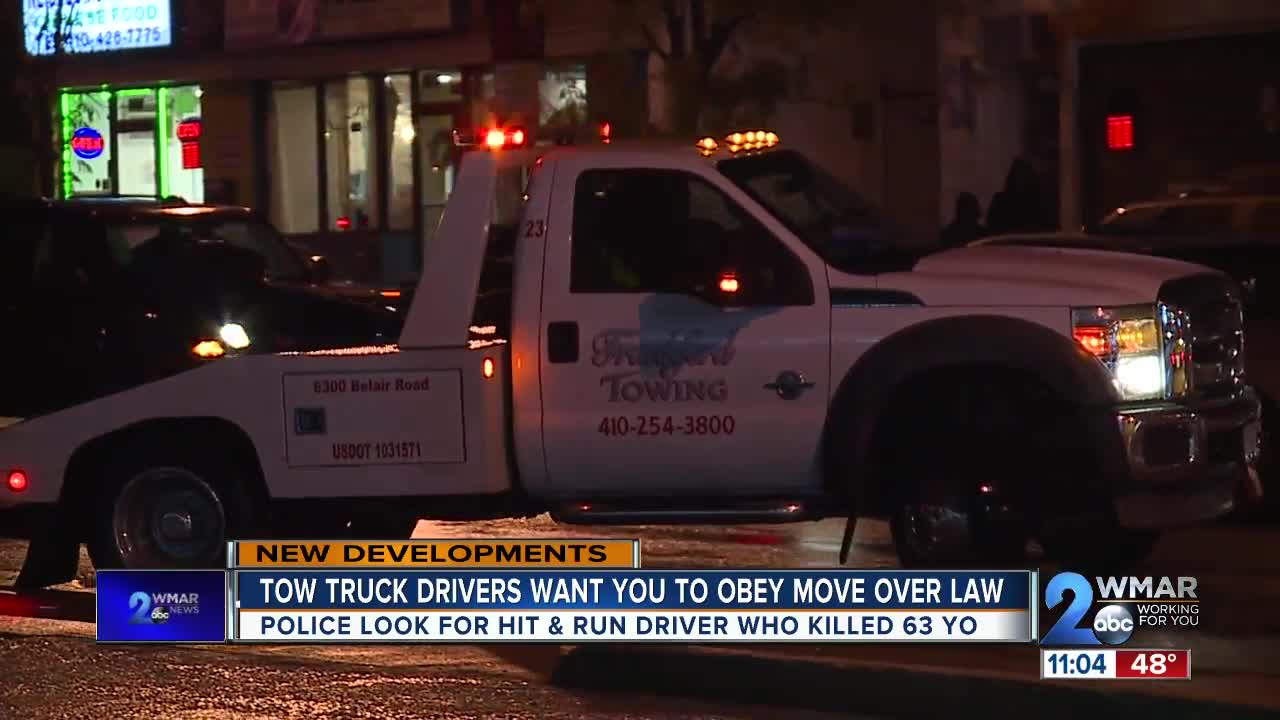 State Police think they know what kind of car hit and killed a 63-year-old tow truck driver Wednesday night while he was helping a AAA member with a flat tire.

State Police think they know what kind of car hit and killed a 63-year-old tow truck driver Wednesday night while he was helping a AAA member with a flat tire.

Police are looking for a 1999-2007 white or beige Cadillac Escalade.

WMAR-2 News spoke with several tow truck drivers who told them they are extremely busy especially because of the weather. Typically you'll see them on the shoulder of the road which doesn't provide much space. This is why people need to obey the law and move over so they don't get injured or killed.

Lewis Peterson Jr. is a tow truck driver for Frankford Towing and is used to drivers not moving over.

"They may slow down, they may not, but more times they fly right past you," he said.

In 2010, the slow down and move over law was passed for first responders and law enforcement. In 2014, it extended to include tow truck drivers.

Despite the law, motorists continue to say they are not aware of it.

Ragina Cooper Ali with AAA says they plan on stepping up their efforts to educate people.

"Our hearts are broken. We’re truly saddened here at AAA to think that this is part of what we do every day and traffic safety is at the very root of what we do," Ali said.

Unfortunately, this isn't the first time a driver was killed.

"I’s dangerous, people just don’t respect a police car or a tow truck, any kind of emergency vehicle on the side of the road."

Vince Protani, an automative technician and driver for Frankford Towing has been doing this for 36 years and says he just wants to do his job.

"I had a couple close calls where I got between the car and a truck...it’s ridiculous," Protani said. "We’re people to, you know what I mean. I got a wife and kids gotta go home every night. It’s scary. You have to have eyes in the back of your head constantly."

Protani has just one request.

"Please just keep your eyes open," he said. "If you see us on the side of the road just slow down a little bit or move over please that’s all you can ask."

Maryland State Police are continuing to work to contact the victim's family so a name has not yet been released.