Since 2004, the Maryland State Highway Administration has solved the growing problem of deer carcasses by composting them.

The decaying deer are shuttled to composting facilities in Frederick and Carroll counties, dumped in stalls, and covered with manure and wood chips. Then nature takes over. Temperatures heat up to 160 degrees, melting away the flesh and organs.

About a year later, what's left is a mound of dirt, soil so rich, SHA Facility Maintenance Technician Team Leader Jim Fogel, refers to it as "pure gold."

His team takes the dirt and scatters it along barren highway medians.

"The grass grew like crazy, it does work good, I think," said Fogel.

By spring, the medians have transformed into habitats for pollinators.

The program is considered a great success. Several other states have also followed suit. However, the state agency has recently hit a snag. They've experienced an uptick in calls from drivers alerting them to bone fragments and shards protruding from the grass and meadows.

"We had complaints because people see bones laying out in the median, and I guess some of them were concerned. They didn't know it was actually a deer, deer bones. I guess they thought it was a human bone," said Fogel.

They don't want the complaints to derail the program, so now they're looking into purchasing a grinding or sorting machine that filters out the fragments.

"Deer compost is full-cycle recycling. What we do is take a problem that's out on the roadway, no one wants to see a dead deer, plus it's awful in the summer," said Charlie Gischlar, media relations manager with the Maryland State Highway Administration.

DEER ROADKILL ON THE RISE

The problem, however, is escalating. Deer composting helps to dispose of carcasses, but only in the two counties where there are facilities. For other parts of the state, highway workers have few options: dig graves or leave them to decompose in the woods. They've also had to handle an increase in the number of service calls.

In the last three years, the number of deer killed on state roads has jumped 69 percent. If the trend continues, they can expect to see greater numbers this deer mating season.

"Female deer runs across the road, well the buck's going to follow," said Fogel. "Usually when the mating season starts, there could be 40 to 50 deer that you pick-up off the road, a day."

The agency isn't expected to catch a break anytime soon, either. SHA attributes the increase in roadkill to shrinking habitats and more drivers on the road. It's turned into a dangerous combination.

All SHA can do is respond. And they have by turning discarded deer into fertilizer.

If you're hoping to get your hands on some of it, prepare to be disappointed. State Highway has mounds of lush soil, but said it's not for sale or to give away. 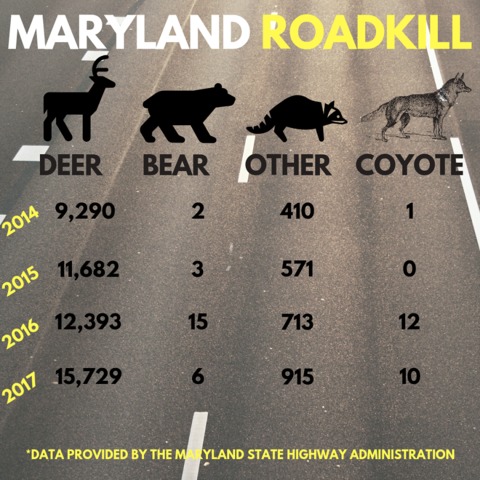