Howard County officials gathered in Ellicott City Wednesday to survey the clean up effort and address the impending threat of more heavy rains soaking the area in the coming days.

Howard County officials gathered in Ellicott City Wednesday to survey the clean up effort and address the impending threat of more heavy rains soaking the area in the coming days.

It appears there may be little reprieve for residents, as storms are projected to slowly roll through the area from Thursday through Saturday. There is a flash flood watch beginning at 2 p.m. and lasting until late Thursday night, Howard County Emergency Management Director Ryan Miller said at a press conference.

“This is going to be a very slow moving type of storm,” Miller said. Part of what made Sunday’s rain so devastating was its lingering pace over the Baltimore area, allowing rain to continue to be dumped on already saturated surfaces. Miller mentioned totals of two to four inches of rain falling Thursday.

Howard County Executive Alan Kittleman said that due to the threat of impending stormy weather, they had canceled an opportunity for residents and business owners to access Main Street and tour properties out of safety concerns.

Key to handling all of that rain will be the city’s drainage system diverting the intense run off, an issue that was compounded as debris became churned up and lodged in storm drains and culverts during Sunday’s flood.

“When people think about drainage, they think about storm drain inlets or the channels, but really what we have is a system down there that plays a critical role, and each part of the system, if one part fails the whole thing does not work very well,” said Jim Irvin, the Director of Public Works for Howard County.

His crews have cleared roughly “100 trucks worth” of debris from the city’s drainage infrastructure. They have also worked to repair systems that were built after the historic flood of 2016 only to be washed out last weekend. To deal with rain that falls on roadways, temporary curbs and sandbags will help guide rain into inlets. A tarp has been added to fortify a slope on Hill Street that was largely washed out. Chunks of debris were cleared from sewers and drains, and the pipes themselves were cleared of silt and sand that collected from the flood waters.

“We’re going to continue to pump out with our equipment to make sure the drainage system is functional and the key thing for us is to keep track of what’s going on in the channels so that debris doesn’t get back in there,” Irvin said. “One blockage and you can have substantial problems.”

Even if the drainage system holds up well and remains mostly unobstructed, the intensity of the rain will still largely dictate the possibility of more flooding.

“If it’s spread out over a longer period of time then we should be OK. If it comes down in a deluge we could potentially have flooding again,” Irvin said, pointing out that if towns further up the Patapsco and Tiber Rivers get soaked, it will likely wash downstream. “It all depends on how quickly it comes down, and also what happens upstream of Ellicott City.”

The debates for many residents and business owners picking up the pieces after their second devastating flood in two years will be whether to return or not, and what role has recent construction and building development played in these weather events.

Kittleman addressed the concerns over development first, saying the current projects in the city were approved long before his term, and there haven’t been many new projects since. HIs administration’s focus has been on making sure what has been approved is being done up to code and abiding by the proper stormwater regulations.

As for coming back, that will be an individual decision each person will have to make on their own, but the county intends to give people as much information as possible to make an informed choice.

“For those folks that decide they are not coming back, we will do whatever we can do as a county, with state and federal partners, to make sure that we are just as supportive of those who don’t come back, as we are for those that do,” said Baltimore County Councilman Jon Weinstein. “At the end of the day it’s a decision they’re all going to have to make individually.”

With two massive floods in three years, the county will continue to look at what improvements and changes need to be made to the city’s infrastructure, flood mitigation systems, and development policies, but there are certain weather events that can’t be thwarted, Kittleman acknowledged.

“We’re going to have some different options and different ideas, because this was a game changer, and 2016 was too, but to have two of these in two years was a real game changer, and we’re definitely committed to exploring new ways going forward,” Kittleman said. ”We’ll be talking very soon about the things we should be doing, but like I said back in 2016, if you get 6 inches or rain in two hours, very little can really be done. We can make it less impactful, but we’re not going to stop all flooding if you have something like that.”

Click the picture below to see images from Ellicott City’s flood repair and preparations: 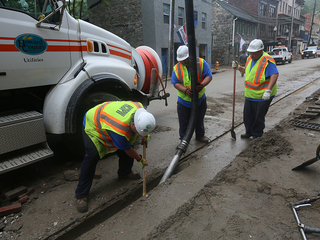