A dozen industrious boys teamed up to raise money for a city they love, and their efforts wildly exceeded expectations.

The group of 12 year olds – Spencer Bond, Keegan Ryan, Quinn Wells, Michael Brogno, Nick Duda, Joey DiTomasso, Ricky Menedez, Luke Holtzman, Jack Loves, and Davey Walls – and 11 year olds – Jackson Moore and Chase Karmilowicz – ran a lemonade stand in the hopes of raising funds for the rehab of Old Ellicott City after it was devastated by floods in May.

The stand started at about 10 a.m. Saturday, setting up on the corner of Academy Road and Hillsborough Road. They began with a more modest goal of raising $200, then $500. When they hit that tally just a few hours into the sales, the benchmarks kept getting more and more ambitious.

“We kind of doubted ourselves at first,” said Holtzman. He said they started with just five gallons of lemonade. “Then in like three hours it’s already all gone and we had to go make another run for lemonade.”

Holtzman said they sold 10 gallons of the tart thirst quencher in the end, as well as snacks and Gatorade. Families made or donated baked goods to sell as well, and one of the boys even made “brookies,” combination brownie/cookies. Those who couldn’t patronize the stand in person bought “virtual lemonade,” through PayPal.

Funds started to wrack up as customers paid in large bills and refused change. Some just stopped to donate to the cause.

The final sum when they shut down their stand around 5 p.m. – $1791.50, said Courtney Bond, the mother of one of the boys running the stand.

Click the picture below to see images from the Old Ellicott City lemonade stand: 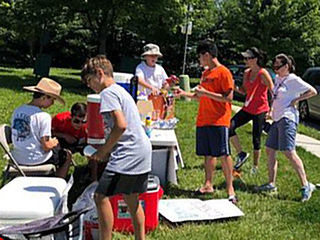 The funds will go to the Ellicott City Partnership, the group working “to preserve the heritage and vitality of historic Ellicott City,” according to the organization’s website. Currently the group is involved in restoration efforts after much of historic mainstream was ravaged by the flooding.

The boys felt compelled to help Old Ellicott City as it is one of their favorite places to go and has played a big role in their lives.

“When I was younger I used to go to Old Ellicott City a lot,” said Chase Karmilowicz. ”When the first flood happened that was really devastating. After the second flood that was horrible, and we thought we could help a little bit.”

Mike Brogno talked about attending festivals and going to dinner, liking the lights and old-timey feel of the place.

The boys conceived their entrepreneurial plan at lunch tables and science classes during the last few days of the school year. Bond joked the charitable effort was formed, “when they should have been studying.”

“Me and Joey were in science when we started to talk about what we were going to do after the school day,” Spencer Bond said. “When we got to his house we started making the posters. We thought it was just going to be us.”

But as they worked, more and more of the group joined in.

“We all just kind of came eventually to the idea,” said Menedez, whose grandparents own La Palapa Grill & Cantina in Ellicott City.

The boys are debating future fundraising efforts for the summer, like selling tickets for a crab and beer fest. Their biggest hope is that the event and funds they raise help draw more attention to the rebuilding effort for Ellicott City.

“I think later we’re going to keep trying to help our city,” said DiTomasso. “$1,800 isn’t enough to repair a hole town or city. I think we need to just keep working hard to help.”