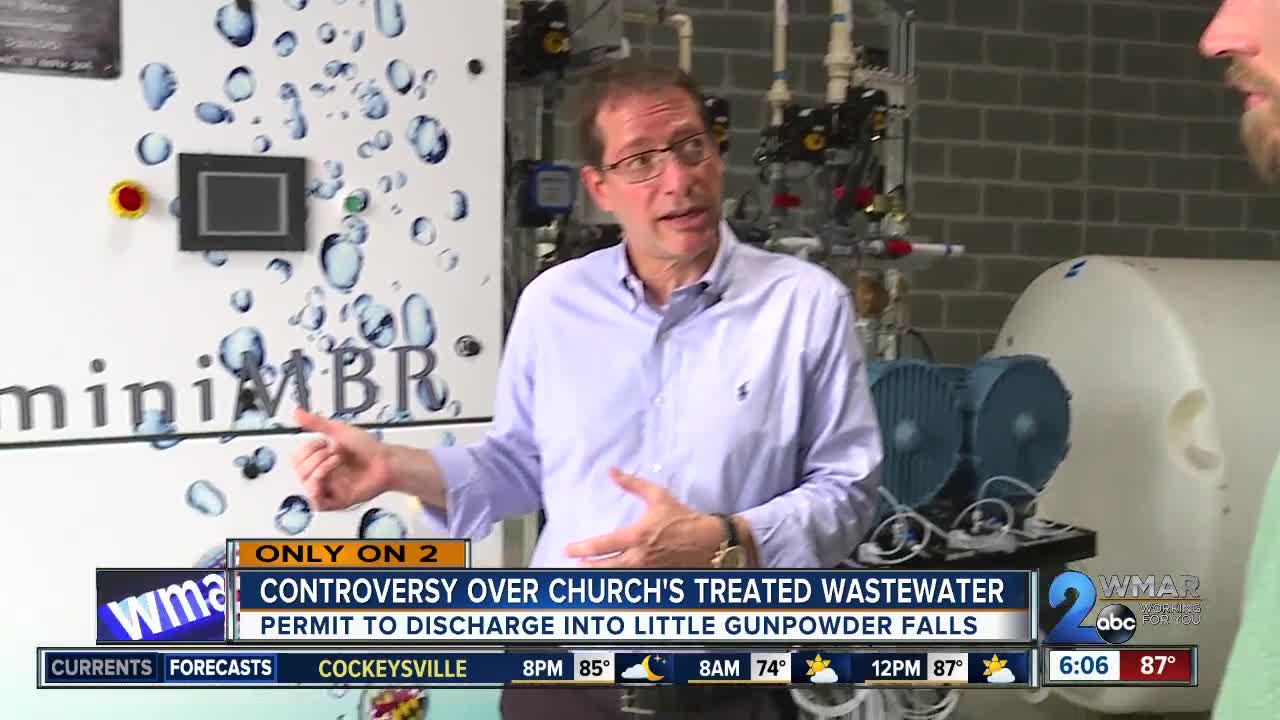 A Harford County church wants to install a wastewater treatment system that would discharge the treated sewage into a tributary of the Little Gunpowder Falls but many people are upset about possible impacts to the environment. 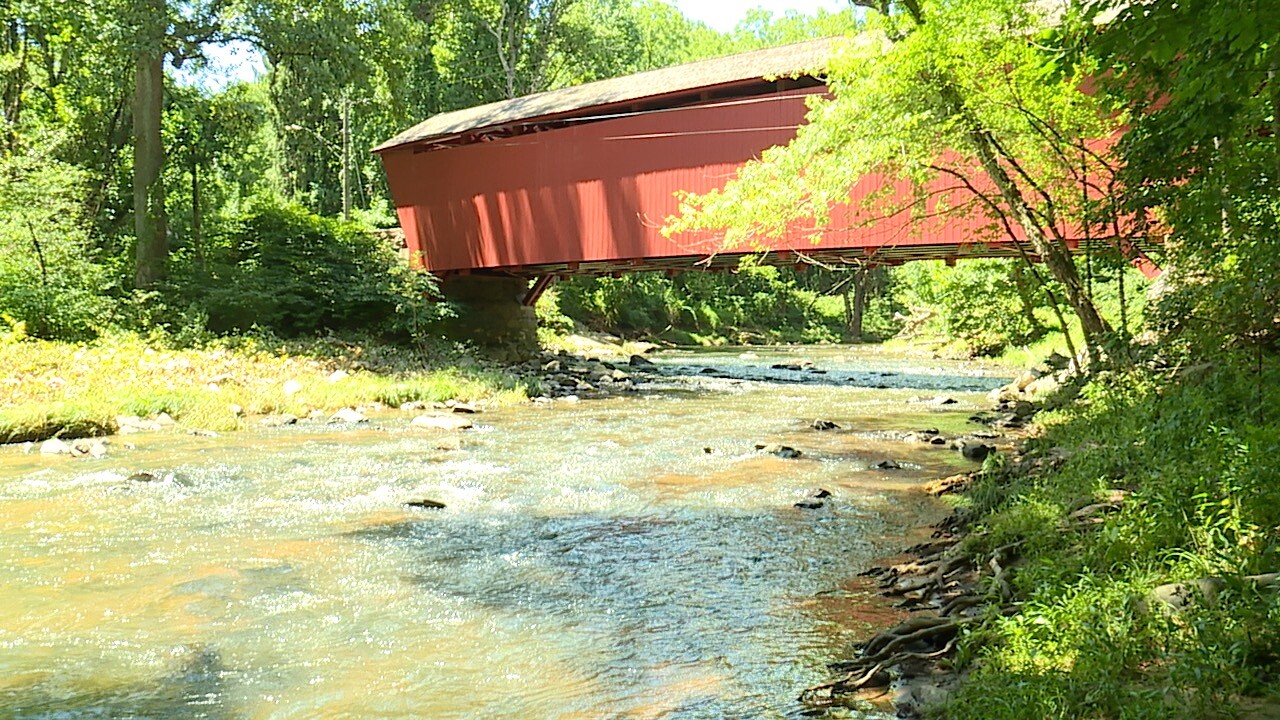 JOPPA, Md. — Years of history, laid out on hundreds of acres of farm land in Joppa.

"This property was originally purchased by Sophie's grandfather in 1919 after he returned from his deployment during the first World War, so it's been in the family for 100 years," said Tod Hayes.

Tod and Sophie Hayes took over the family farm at the beginning of the century, continuing the upkeep of the property under a conservation easement by boarding horses and growing hay.

"It's a little piece of the country we are able to still maintain," said Sophie.

Bisecting their property is a stream that leads to the Little Gunpowder Falls. It's the tributary that Mountain Christian Church would discharge treated wastewater into if their permit for a new treatment system gets approved by the Maryland Department of the Environment. The proposal has the Hayes' concerned about the impacts to the environment and cleanliness of the water.

"I understand the wastewater plant takes out some things, but it does not take out pharmaceutical residue," said Sophie.

But the church's executive pastor Luke Erickson said the goal is to improve their current system that MDE said is failing or have already failed, has "significant" compliance violations and discharges into a drain field where "a restrictive clay layer exists creating poor permeability to to subsurface groundwater."

"There's been reports of the clay there, it has trouble percolating, so that's ultimately why MDE has recognized our system is unsustainable," said Erickson.

Erickson said when they noticed the system starting to fail a few years ago, they reached out to MDE to see what their options were.

The church asked for a permit for roughly 5,000 gallons per day. MDE proposed keeping their current discharge flow at an average of 2,400 gallons-per-day, which they say is far less discharge than leaving a garden hose running all day.

"They've helped us go down this path which doesn't happen to be the cheapest path. It comes at a considerable cost, but it's the right thing to do," said Erickson.

That path costs around half a million dollars to install a new treatment system developed by Owings Mills-based Innovative Treatment Products LLC.

"The raw sewage first has to pass through this screen," said owner Rob Kershner, describing the beginning of the treatment process.

He said then they use a biological process where bacteria consume the waste and convert nutrients into a gas or solids. Then a vacuum pulls the water through a membrane that traps bacteria and viruses.

"The water coming out has zero solids in it, zero bacteria and zero viruses. This is going to be significantly cleaner than the receiving water," Kershner said. "This system is going to treat levels higher than what MDE requires."

Kershner said these type of small plants have started becoming very popular, with his cutting edge technology doing everything all in one. He said it makes sense for smaller operations and schools that are far from a county's sewage treatment plant.

"Instead of trying to bury 10 miles of pipe, which may cost millions and millions of dollars, it's just easier to put a small treatment plant on site and operate it locally for local discharge to a stream or subsurface," Kershner said.

He said they have clients all over the state and country.

"The Maryland National Guard base in Reisterstown has one of our systems. We have small communities in Cecil County that we are installing these systems in," Kershner said. "We developed it here because of the Chesapeake Bay, and now we starting to export these units outside the state of Maryland to other parts of the United States, including California and Michigan."

"We care deeply about the environment. We want to be good stewards of the land. God has given it to us. We don’t own it; we manage it, and so this is our effort to manage it well," Erickson said.

Erickson also made it clear that this permit is not so that they can expand and also said all violations they have been cited for, the church has responded to immediately and is taking corrective action. The church put out a Q&A on their website to answer anymore questions.

"It doesn’t seem right for them to solve their problem by creating problems for people downstream, their neighbors," Sophie said.

MDE held an informational meeting at the beginning of the month, which was heavily attended. Many expressed their concerns with possible pollution.

The Hayes' would like to see other alternatives studied before treated wastewater is discharged into their backyard.

"It doesn’t appear that they have been studied, and if they have, it hasn’t been shared with us, and we’re very intimately affected by it," Tod said.

"Perhaps their septic field could be renovated. There may be other solutions. It may be possible to put the gray water back into use for flushing toilets and things," Sophie said.

In the last week, they have had an estuary ecologist out to their property to test the current water conditions.

"Because this area hasn’t been well characterized, one of the important pieces of the puzzle is to just get base line about what kind of conditions exist before any additional effluent comes into the stream," said Elizabeth Shrader. "We’re looking to have dissolved oxygen readings of at least 8 for an non-impacted stream ecosystem, and it looks like this is 6.7 milligrams per liter, which is less than the threshold that is explained in the permit so there might be something going on upstream already."

Other concerns the Hayes' have include not getting any notice about the permit and potential further erosion of the stream.

"Even though they say it’s not a lot of water, that amount of water constantly I think will have a dramatic affect," Sophie said.

The Hayes' said they just want to conserve their property to the best of their abilities so that their family can live there for the next 100 years.

"We hope that somebody from the family will always be here to enjoy the property," Tod said.

Read the full letter MDE sent to the church below.

MDE has the final decision on the application and said they will take all opinions submitted into account before they do. They even extended the comment period until August 2 and set up an additional informational hearing for Tuesday, July 16th at 6:30 p.m. at the Baltimore County Public Library, Perry Hall Branch on Honeygo Blvd.