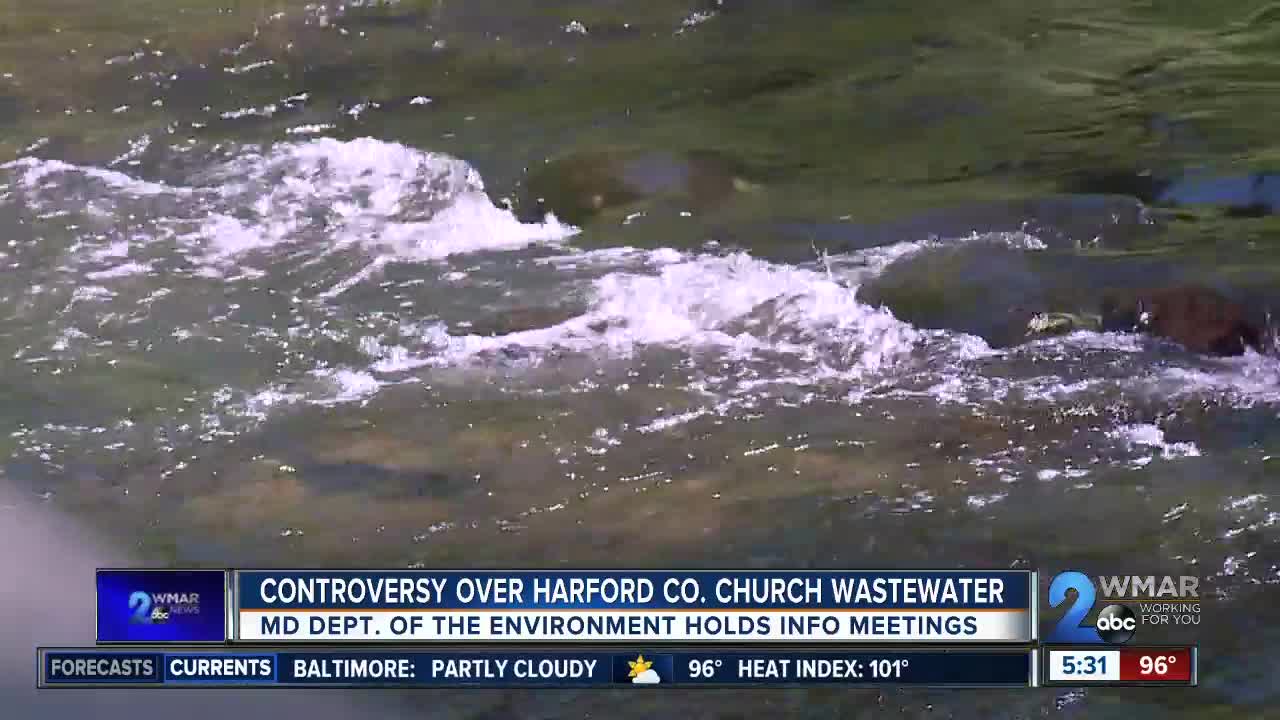 JOPPA, Md. — A church is at the center of a controversy between Baltimore and Harford counties over wastewater.

The Mountain Christian Church wants to increase the amount of treated wastewater they are discharging to help deal with membership growth. They also wanted an improvement over their current septic system. The new one would be state-of-the-art. But many neighbors are worried about pollution because the treated wastewater would go directly into a tributary leading into Little Gunpowder Falls.

They submitted a permit to the Maryland Department of the Environment, which held an informational meeting Tuesday afternoon at the Joppa branch of Harford County Libraries.

Despite it being in the middle of the day, the room was packed with frustrated residents.

"We are horrified," said one resident. "You're dumping right into the top of our neighborhood."

Currently, the church is approved to discharge 2,400 gallons of treated wastewater per day. The permit requests 4,999 gallons per day and they would get a new treatment system. The contractor for the system also presented at the meeting, saying the technology focuses on filtering out nitrogen and phosphorus to clean the water.

"Its improved technology and safer methods along with cleaner effluent (the water discharged is clean and surpasses all requirements and regulations for purity) give us the assurance that we are honoring the planet, being good neighbors, and showing appropriate concern for the stewardship of the environment," said the church on Facebook.

While there were a lot of voices of opposition, some at the meeting said this seems like an improvement over the current system and are satisfied that the new filtration system is being used in other areas of the state and discharging into bodies of water.

Baltimore County Councilman David Marks introduced a resolution last night opposing the permit, but today at the meeting he said he hopes they can find common ground.

"The Mountain Christian Church has been an important part of religious life of Harford and Baltimore counties for many years. They do a lot of work in the community. Hopefully we can find a common solution to address their problems," said Marks.

People from the church were at the meeting but did not choose to speak. They just wanted to hear people's concerns.

Also coming to light for many Tuesday, the church's ongoing septic system violations. Maryland Department of the Environment said they have found a dozens violations over four years, and they have notified the church that they are required to submit information to them about how they are going to correct them.

MDE will be holding another meeting July 16 at the Perry Hall Public Library and is accepting written comments until August 2 before they make their final decision.

Any written submissions may be submitted to Yen-Der Cheng via email at yen-der.cheng@maryland.gov or via mail, addressed to: