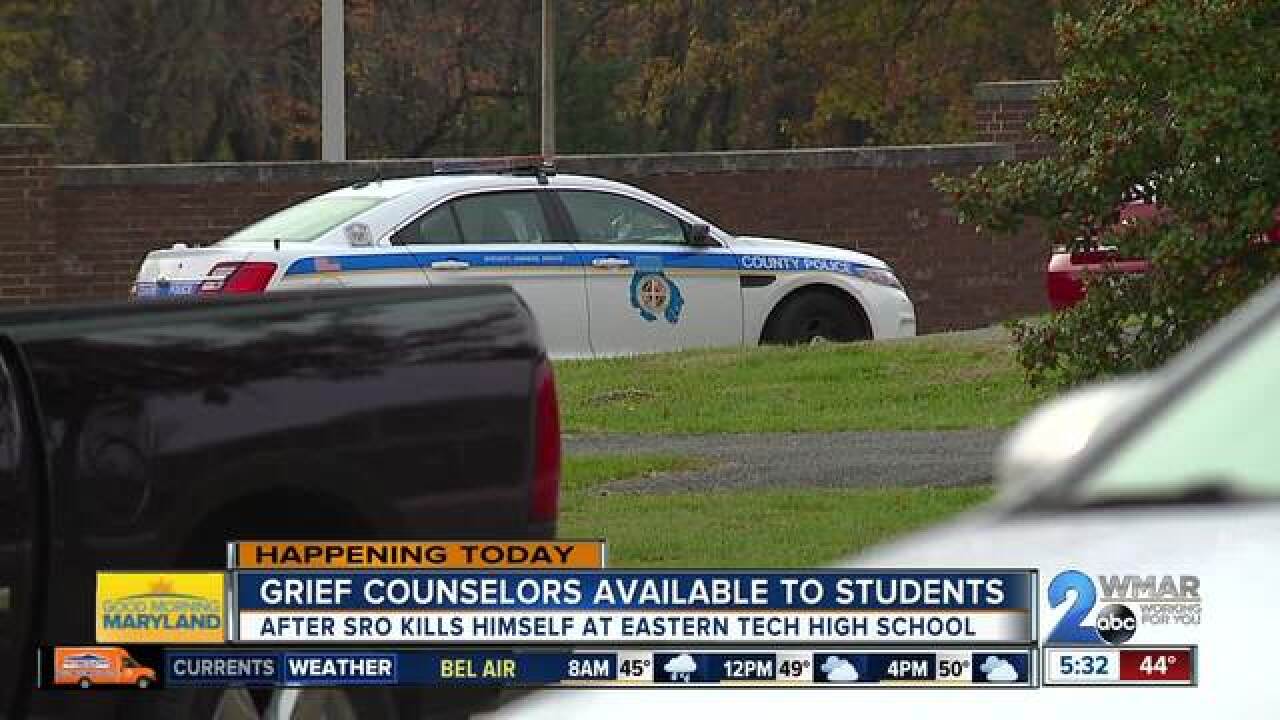 The incident occurred at about 12:23 p.m., prompting the school to issue a temporary shelter in place order for all students and staff. The order was lifted later in the afternoon and students were dismissed at 2:20 p.m. All after school and evening programs at the school were canceled.

The officer was later identified as J. Comegna, a 21-year veteran of the force who had served as an SRO for 12 years, filling that role at Eastern Technical High School for the past four years, said Baltimore County Media Relations Officer Jen Peach. A tweet by Baltimore County Public Schools superintendent Verletta White identified him as Joseph Comegna.

Peach said faculty at the school heard what sounded like a gunshot and went to the SRO office in the school's basement to investigate. There they found Comegna suffering from a gunshot wound to the "upper body," Peach said. Peach says a single shot was fired, and just one gun was found in the office. Comegna was rushed to Medstar Franklin Square Hospital where he was pronounced dead.

"Preliminarily we believe it was a self-inflicted gunshot wound," Peach said. "We don't believe any student was involved or witnessed the event."

Shortly after the shelter in place order was announced, police said they did not think the incident being investigated posed a further safety risk to anyone else in the area.

Peach said video footage showed Comegna walking down a basement hallway and into his office. He had a body-worn camera, but "there was no type of incident that would have required that camera to be on," Peach said. "We do not believe it was on."

Peach said if there is body-cam footage, the department will determine if or when it might be released.

Comegna had a family, and there was nothing on his service record or known among his colleagues or others that would potentially factor into a motive for suicide, Peach said. She said the next step is to try to establish a motive.

Peach said the school will be open tomorrow. Grief and resource counselors will be available for faculty and students. Peach said such counseling is routinely available to police officers who may need it.

"I am saddened to learn about the death of Officer Joseph Comegna, the school resource officer at Eastern Technical High," White said in a tweet following the Baltimore County Police press conference. "My thoughts & prayers are with his family, BCPD, and Eastern Tech's students & staff. We will be sure to have the traumatic loss team at the school for support."

VIEW THE FULL NEWS CONFERENCE BELOW

WMAR-2 News spoke to Medstar Franklin Memorial Medical Center, psychologist, Dr. Corneliu Sanda about how parents can help their children cope with this kind of tragedy.

"It's not their fault that this happened, they shouldn't be feeling guilty."

Sanda said in instances where young people deal with tragedy like the one involving Comegna, it's important for parents to step in.

"The message for the children who are trying to understand this is that even the strongest person can be suffering from an illness," Sanda said.

"For somebody like him who was there as an authority figure was there to protect them, I think it’s very traumatic.  I understand if they are scared if they don’t understand what’s going on and that’s where the parents come in in trying to explain this."

Sanda said dealing with the suicide of someone a student looks up to is even hard for adults to wrap their minds around.

"The message that needs to be transmitted to everybody is that people might seem strong on the outside but it’s hard to know what’s going on in that particular person’s life."