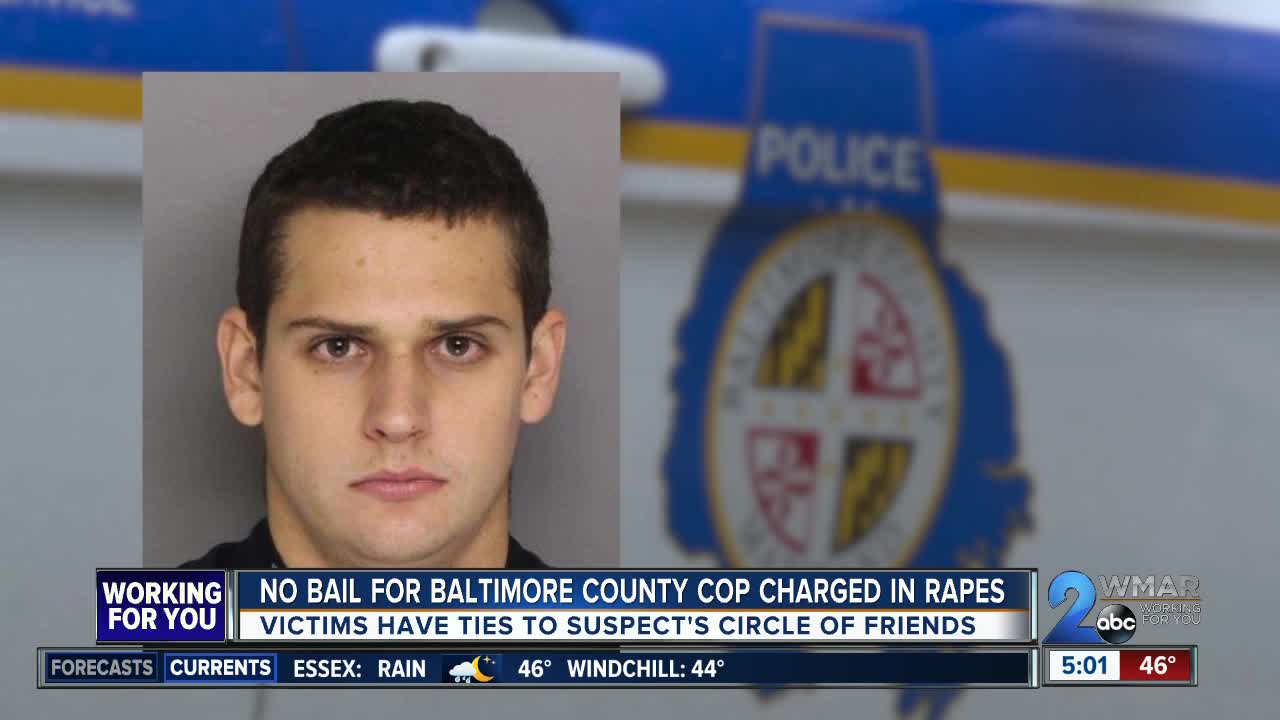 Over a span of two years, charging documents allege how an off-duty Baltimore County Police officer repeatedly raped and sexually assaulted women he knew while drunk.

Anthony Michael Westerman, a 25-year-old, six year veteran of the department is charged with multiple counts of rape and assault.

Police first found out about the incidents in October 2019.

The first incident began at the Red Brick Station in White Marsh in November 2017.

The victim who was 22-years-old at the time went to the bar with Westerman's high school friend.

Westerman was also at the bar, and it was the first time he and the victim had met.

The victim alleges she was extremely intoxicated after drinking lots of alcohol, including shots Westerman bought.

Later on, the victim says she went to her car and passed out in the drivers seat. Her friend she went to the bar with later came knocking on the car window wanting the victim to go with her back to her house in an Uber.

Westerman was also outside by the car and allegedly offered to get the two women an Uber, and have it drop them off at the victim's friend's house, while he and his friend would be dropped off at Westerman's house.

After Westerman made it clear to the friend that he would have the Uber take she and the victim to her house, the women agreed and the four got an Uber.

During the ride, both women passed out and awoke to find themselves at Westerman's house instead.

According to court documents, the friend asked Westerman why he didn't have the Uber drop her and the victim off at her house as discussed. Westerman reportedly said it was fine and the two could come into his house for a while.

All four then went downstairs and sat on the couch. The victim allegedly passed out while the other three watched a movie.

The victim told police she wasn't sure how much time had passed, but while still on the couch, she found herself without pants and Westerman on top holding her down, trying to have sex with her.

Charging documents say the victim tried pushing Westerman off and told him to stop. Westerman allegedly told the victim he liked it when she told him no and tried stopping him, and proceeded to penetrate her.

During the rape, the victim said Westerman kissed her face, lips, and neck. Westerman eventually got off the victim, at which point she again passed out. When she woke up, Westerman was laying next to her on the couch, with her pants still on the floor. The victim told her friend what happened and the two left, but decided not to report the incident to police.

In June 2019, nearly a year and a half following the first incident, Westerman is accused of raping a second women, again at his home.

This time a 20-year-old victim was visiting a relative who lived with Westerman, who the victim also knew.

Charging documents say the three were drinking at the house, and afterward decided to go to bed. Westerman and the relative went into one bedroom and the victim to another.

The victim was playing on her cell phone about to dose off, when she says Westerman came into the room and sat on the bed next to her.

Westerman said nothing and began kissing the victim all over and putting his hand down her underwear. The victim tried getting Westerman to stop, but he still continued and removed her clothing and had sex with her.

The victim told police she considered Westerman a big brother, and didn't want to report the incident because she knew he was a police officer.

A week later, Westerman is accused of sexually assaulting a third woman.

This victim met up at Westerman's house for the relative's birthday. The victim in this case is also a relative to Westerman's roommate who was celebrating a birthday.

After drinking at the house, the three decided to go out to Sunset Cove at Maryland Marina in Middle River.

There, the relative and another friend went to the bathroom leaving Westerman and the victim alone at a table.

Westerman then allegedly took the victim by the hand to a secluded part of the restaurant, where the victim thought Westerman might tell her about his plans on proposing to the relative.

After a while at the bar, Westerman for a second time took the victim to the same secluded place, and again tried kissing her. This time the victim cussed Westerman out, told the relative, and the two left.

For safety reasons, police aren't releasing the identities of any of the victim's or relatives involved.

Westerman is currently suspended from the police department without pay. He was denied bail following a Monday afternoon review.

"There are three victims over the course of a period of time. We believe that he poses a danger to the community. He was not acting as a police officer at the time these events occurred and these were all people that he knew, but we believed based on the continuing course of conduct over the course of years that no bail was appropriate," said Assistant State’s Attorney Lisa Dever, "Everyone who knew him knew that he was a police officer. That certainly was part of the thought process of why to come forward or not to come forward, so I'll just leave it at that."