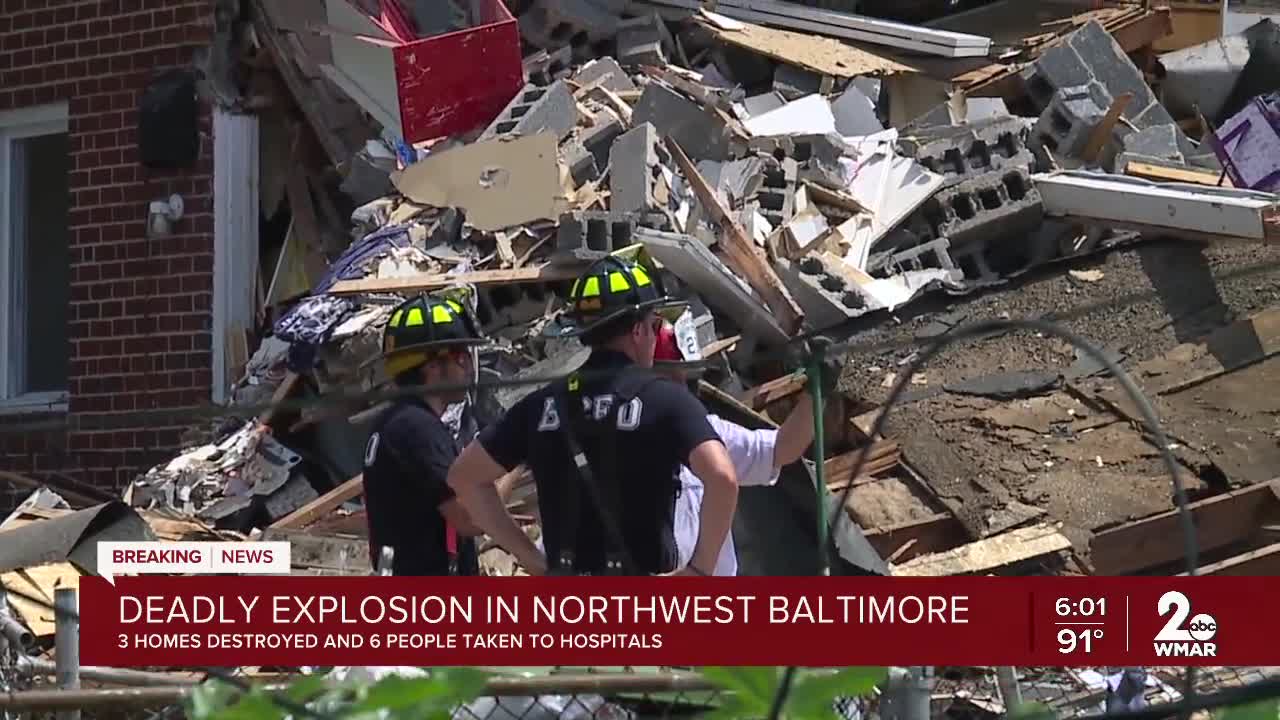 One woman is dead and two others are in critical condition after a gas explosion caused three homes to collapse Monday morning in Northwest Baltimore. 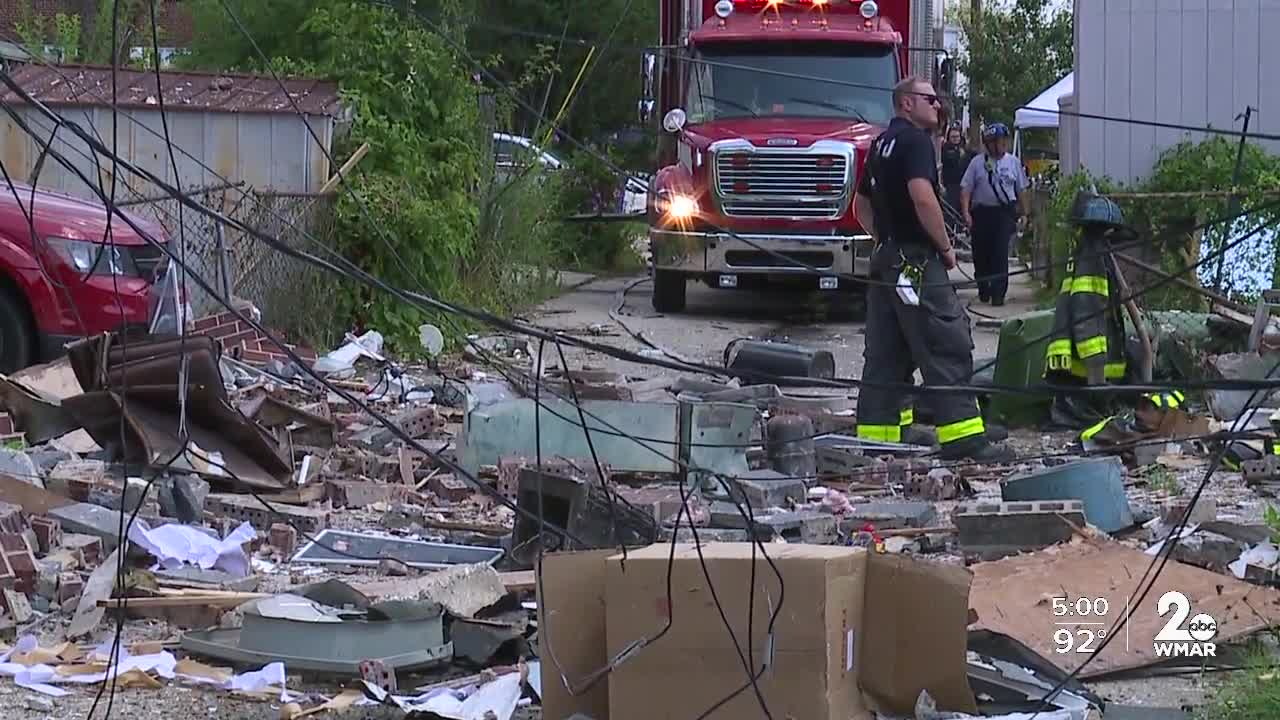 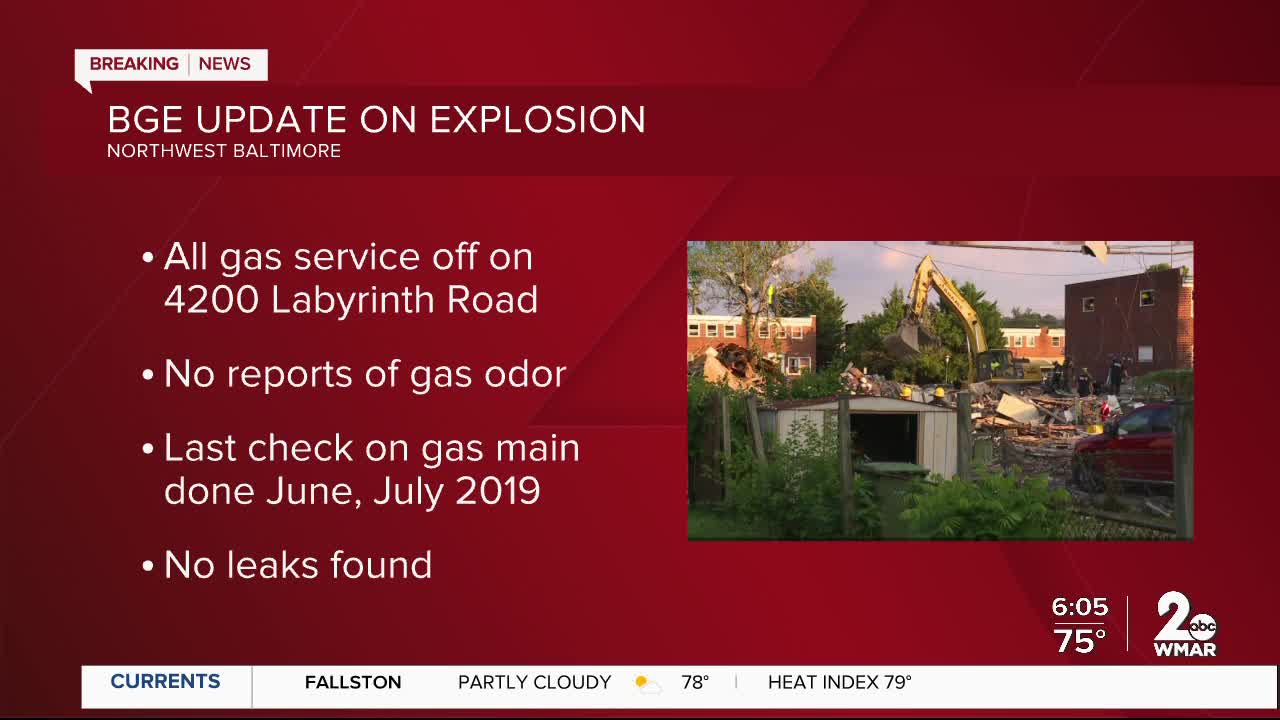 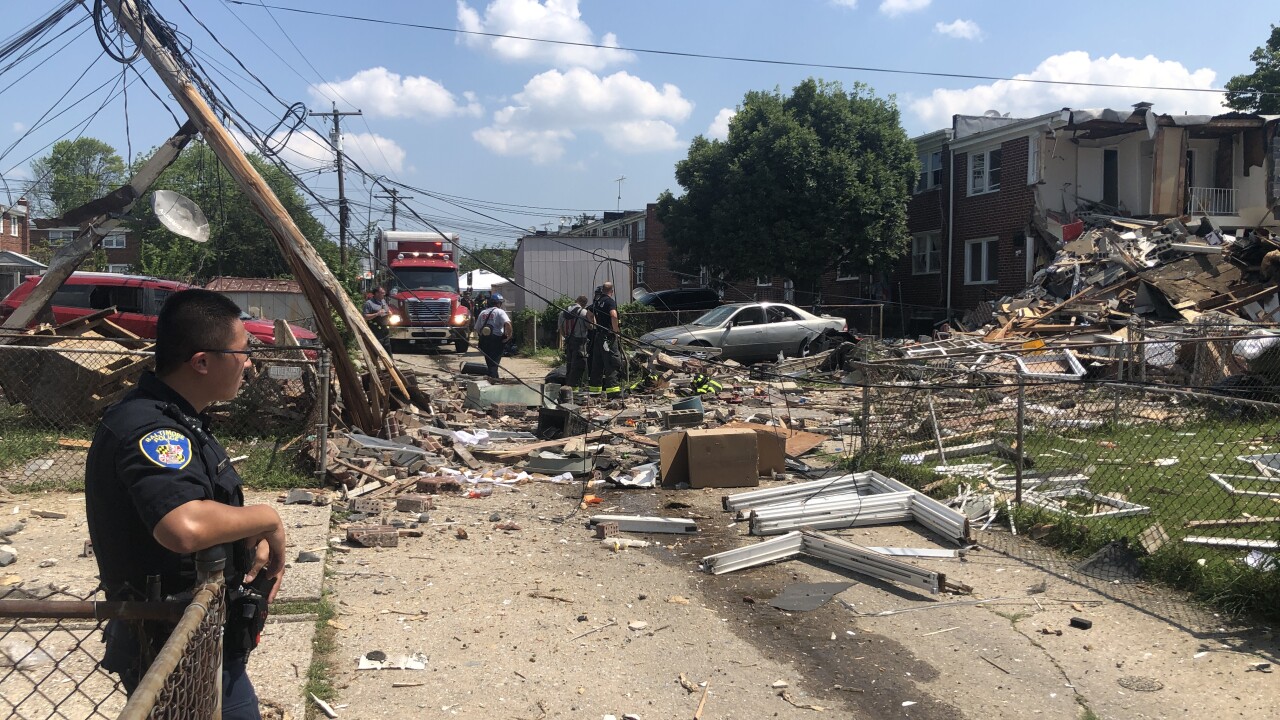 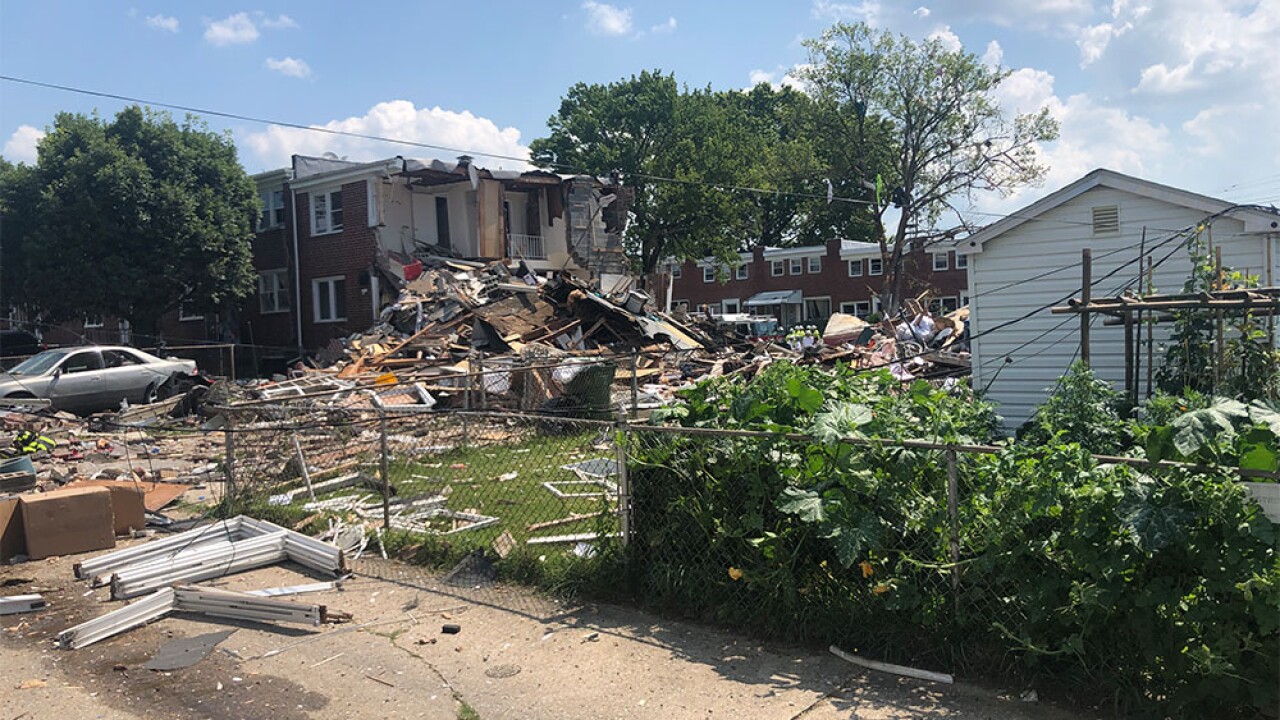 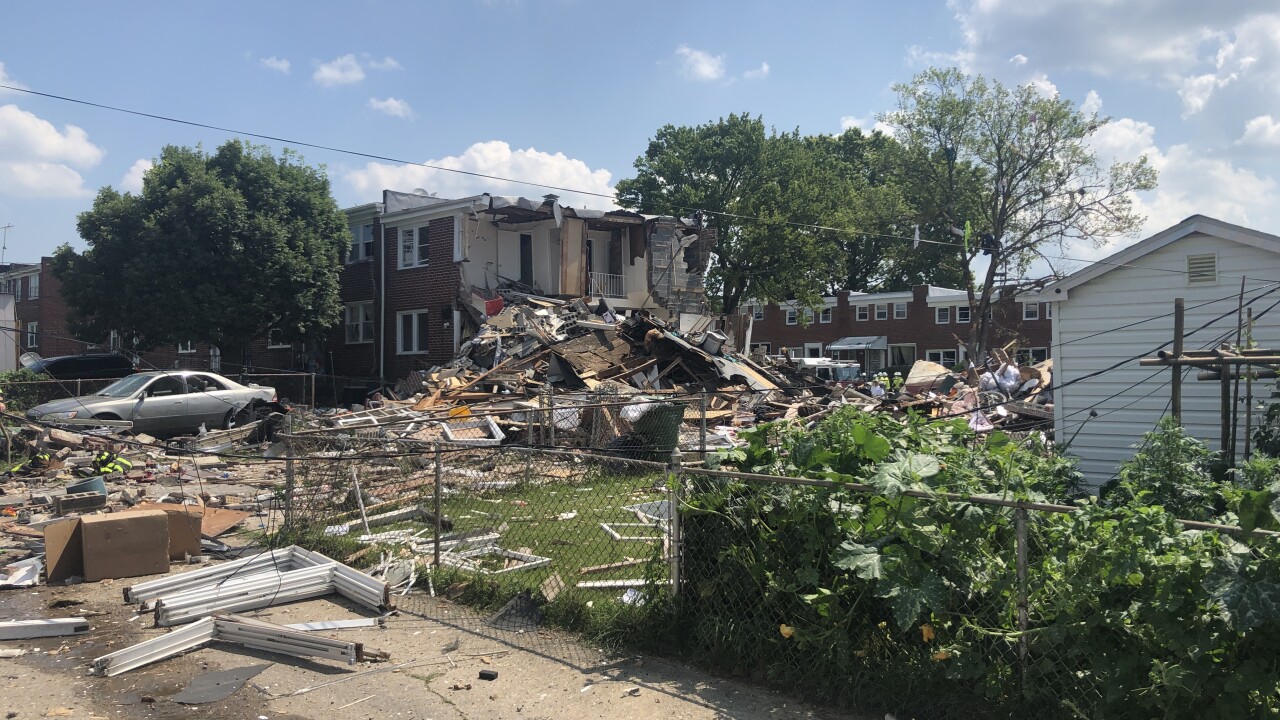 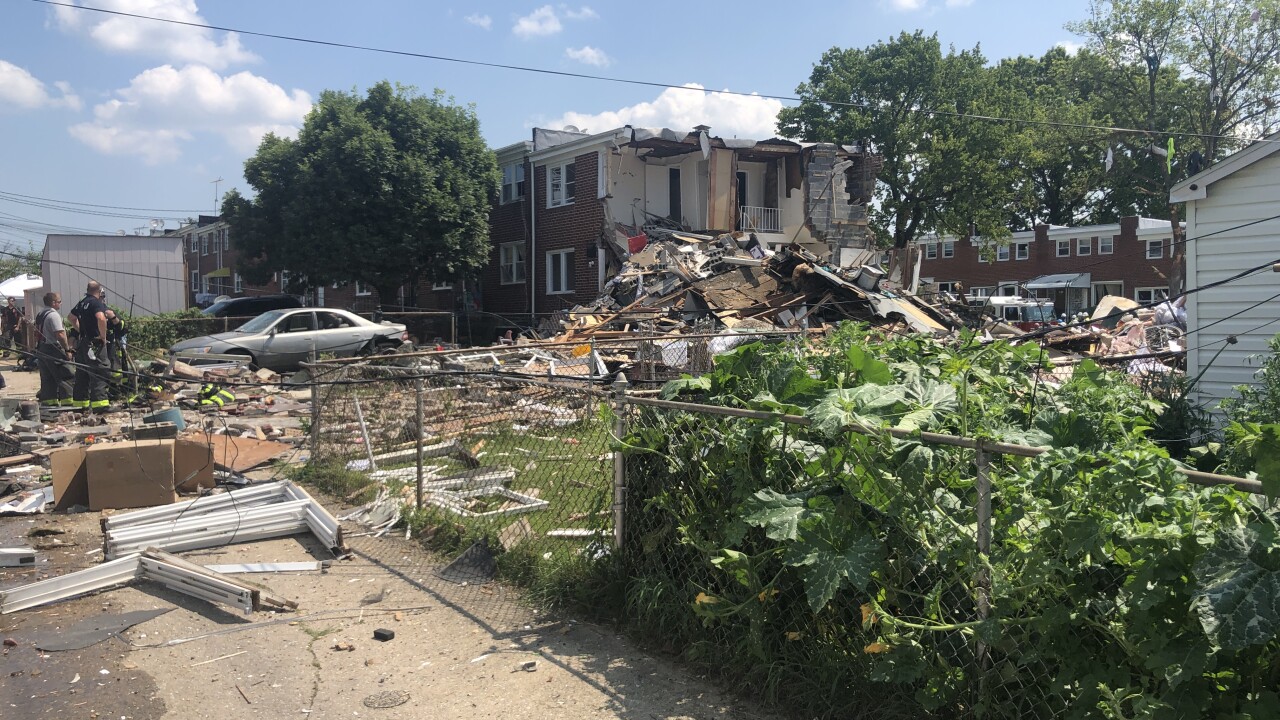 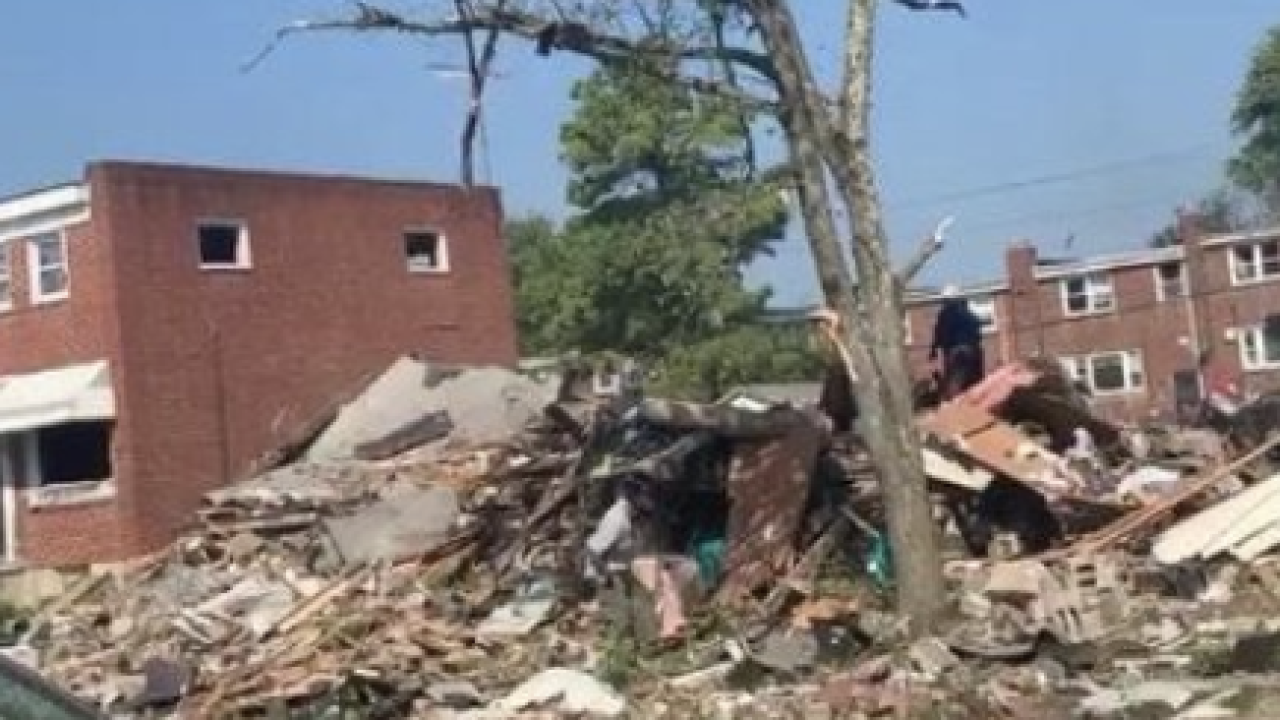 BALTIMORE — A woman and man are dead and at least seven other people are seriously hurt after a gas explosion caused three homes to collapse Monday morning in Northwest Baltimore.

As rescue crews and K-9's continued combing through the rubble overnight, a man's body was discovered just before 1 a.m. Tuesday. He is the second reported death related to the incident.

Authorities haven't officially released the names of any of the victims.

The explosion happened just before 10 a.m. near the Plaza in the area of Labyrinth and Reisterstown Roads, prompting a three alarm response from 200 rescue crews from multiple city and surrounding county agencies.

About 200 people were impacted, including 30 who needed temporary housing.

The American Red Cross is helping them with food, shelter, transportation, and medical services, while the city works to make sure the homes still standing are structurally sound.

BGE was able to turn gas off in the area by 9 p.m. Monday.

On Tuesday evening, they resupplied gas to the main and service pipes along the affected portion of Labyrinth Road, to begin the process of restoring service to 34 properties without gas.

Meanwhile some electric lines were damaged causing power outages, but they've since been repaired with all power having been restored in the neighborhood.

So far BGE says they've been unable to find any leaks or problems with gas mains and meters in the area.

Investigators are looking into whether any customer owned home appliances or utilities potentially contributed to the explosion.

Prior to the blast, BGE said they received no reports of gas odors or leaks at any of the homes in the last five years.

The area’s gas infrastructure was installed in the early 1960s, and was last inspected in July of 2019.

Maryland's Vital Records building was forced to close for the rest of the day, following the explosion.

WMAR-2 News spoke with two witnesses who explained what they heard and saw, and how they rushed to help.

Governor Larry Hogan tweeted that he's been debriefed on the situation.

We are closely monitoring the situation in northwest Baltimore following this morning’s horrific explosion. We have reached out to offer our full support to the ongoing response and recovery efforts, and are deeply grateful to the first responders on the scene.

City Council President Brandon Scott said he first learned of the explosion from his mother, who works at a grocery store in the Reisterstown Plaza.

"This morning’s explosion was absolutely devastating. The tragedy hit close to home as I received a call from my mother who works nearby in the Reisterstown Plaza. She heard the blast from her job," said Scott. "I want to thank not only our Baltimore City first responders, but also Baltimore County for their support during this tragedy. My heart and prayers are with the victims, their families, and the residents of this community. During this time of uncertainty, the only thing that matters is the safety and wellbeing of our neighbors."

For now, people are being told to steer clear of the area.

WMAR-2 News has a crew on the ground and will continue to provide the latest updates as they become available.