The Waterfront Partnership is also celebrating because of the recently passed Styrofoam ban.

The floating debris collector has been happily gorging at the mouth of the Jones Falls River, located between Piers V and VI in the Inner Harbor. The contraption uses both the water’s current and solar powered panels to move a conveyor belt that lifts refuse out of the water and into a dumpster that is changed out periodically when it’s full. The wheel has consumed more than 1.5 million tons of garbage and debris since May of 2014, according to the Waterfront Partnership, a non-profit who advocates for a cleaner, healthier harbor. 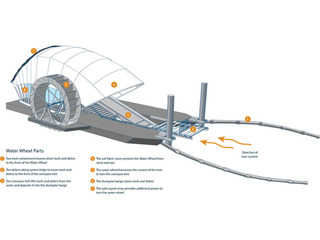 Of particular note, Mr. Trash Wheel has removed more than 735,000 polystyrene containers, more commonly known as Styrofoam, from the water. Such containers were recently banned by the city council, with a potential statewide ban debated in the 2018 General Assembly Session. Often referenced in the debate over such containers was their frequent appearance floating in the harbor, particularly after large rain storms.

Mr. Trash Wheel has drawn praise and attention locally and nationally, seen as an innovative, self-sustaining, environmentally friendly tool for cleaning polluted water ways. He has built a fan club as well, garnering more than 16,000 followers on his Twitter account.

The Trash Wheel family has grown in the past four years, with potential additions on the way. A fundraising effort by the Waterfront Partnership generated more than $550,000, enabling the installation of a second wheel along the Canton waterfront, at the mouth of Harris Creek, near Boston Street and Lakewood Street. An online contest donned the new refuse remover “Professor Trash Wheel.” There are plans for a third wheel to be added where the Gwynn Falls River empties into the Patapsco River in Port Covington, and another in Mason Cove.

As appropriate for any birthday celebration, Mr. Trash Wheel wrapped up the festivities, as he does every year, with a cake….made out of trash, of course.